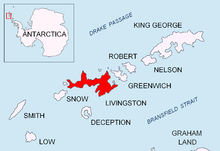 Location of Livingston Island in the South Shetland Islands. 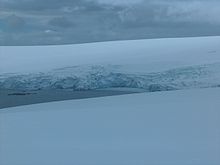 Aleko Point (Nos Aleko \'nos a-'le-ko\), also Aleko Rock, is a rocky point midway along the northeast Antarctic coast of Emona Anchorage in the east of Livingston Island, projecting 150m to the west of southwest.

A nameless 400m wide cove is indented for 250m to the north of northwest, with two chains of rocks extending 80m and 50m in a westerly direction. The cove’s head features three rocks which are awash at high tide, the westernmost one lying 320m north of Aleko Point, while a larger rock rising to over 4m is located 90m southeast of the point.

The point emerged during a recent glacier retreat and was first recorded in the Bulgarian recording of February 1995. The rock was mapped from a topographic survey of the region made from December 8, 1995 to February 8, 1996.

Aleko is the name of a peak of Rila Mountain and a site on Vitosha Mountain, named after Aleko Konstantinov (1863–97), a prominent writer and proponent of wilderness exploration.