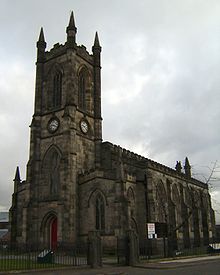 Pendleton is an inner city area of Salford, Greater Manchester, England. It is about 2 miles (3.2 km) from Manchester city centre. The A6 dual carriageway skirts the east of the district.

The market area of Pendleton has many high rise blocks of flats (tower blocks). These are typically between seventeen and twenty seven floors high and are very close to the new Pendleton Police Station. The high rises are some of the tallest buildings in Salford.

In the Middle Ages the manor was named Pen-hulton when it was held by the Hultons of Hulton Park.[2]

Until 1780 the village was rural, a group of cottages around a village green with a maypole. The Industrial Revolution brought about rapid expansion in the population and large cotton-mills and premises for dyeing, printing, and bleaching were built providing employment. Collieries were developed from the early 19th century.[2]

Pendleton emerged as a township and chapelry in the ecclesiastical parish of Eccles in the hundred of Salford in the historic county of Lancashire. After 1837 Pendleton was part of the Salford Poor Law Union which took responsibility for the administration of the Poor Law and provided a workhouse.[3]

Pendleton sits on the coal measures of the Manchester Coalfield, part of Lancashire Coalfield. In the early days of coal mining in the area the seams lying on or close to the surface were exploited, but as time went on it became necessary to dig progressively deeper; by the beginning of the 20th century Pendleton Colliery had the deepest shafts in Great Britain, at 3,474 feet (1,059 m).[4]

The area gives its name to the geological feature known as the Pendleton Fault, one of four large faults running under Manchester. The faults are geologically active, and cause earthquake tremors that have been recorded for centuries, most recently in August 2007, when Manchester experienced six minor earthquakes.[5]

Pendleton railway station closed in 1998 after having severely damaged in an arson attack.[6] Salford Crescent railway station now links the district and the adjacent University of Salford, with central Manchester (Piccadilly, Oxford Road and Victoria) and many towns in North West England and Scotland from as far south as Buxton to as far north as Windermere and Glasgow.

Pendleton Church or St Thomas's Church is a Commissioners' Church[2] and replaced the original chapel. It was built in 1829–31 to the design of Francis Goodwin and Richard Lane in a Perpendicular revival style with a west tower and three galleries.[7]