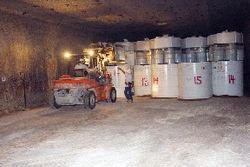 A deep geological repository is a nuclear waste repository excavated deep within a stable geologic environment (typically below 300 m or 1000 feet). It entails a combination of waste form, waste package, engineered seals and geology that is suited to provide a high level of long-term isolation and containment without future maintenance.

The most hazardous and long-lived radioactive wastes, including spent nuclear fuel, must be contained and isolated from humans and the environment for very long times. Disposal of these wastes in engineered facilities, or repositories, located deep underground in suitable geologic formations is being developed by many countries worldwide as the reference solution.[1]

Common elements of repositories include the radioactive waste, the containers enclosing the waste, other engineered barriers or seals around the containers, the tunnels housing the containers, and the geologic makeup of the surrounding area.[2]

Deep geologic disposal has been studied for several decades, including laboratory tests, exploratory boreholes, and the construction and operation of underground research laboratories where large-scale in-situ tests are being conducted.[3] Major underground test facilities are listed below.

The pit Asse II is a former salt mine in the mountain range of Asse in Lower Saxony/Germany, that was allegedly used as a research mine since 1965. Between 1967 and 1978 radioactive waste was placed in storage. Research indicated that brine contaminated with radioactive caesium-137, plutonium and strontium was leaking from the mine since 1988 but was not reported until June 2008[17]

The repository for radioactive waste Morsleben is a deep geological repository for radioactive waste in the rock salt mine Bartensleben in Morsleben, in Lower Saxony/Germany that was used from 1972–1998. Since 2003 480,000 m3 (630,000 cu yd) of salt-concrete has been pumped into the pit to temporarily stabilize the upper levels. The salt dome is in the state of collapse.

The Waste Isolation Pilot Plant (WIPP) in the United States went into service in 1999 by putting the first cubic metres of transuranic radioactive waste[18] in a deep layer of salt near Carlsbad, New Mexico. 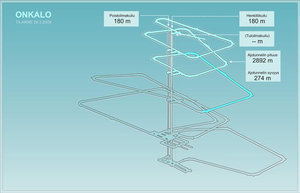 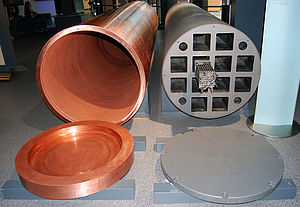 The ability of natural geologic barriers to isolate radioactive waste is demonstrated by the natural nuclear fission reactors at Oklo, Africa. During their long reaction period about 5.4 tonnes of fission products as well as 1.5 tonnes of plutonium together with other transuranic elements were generated in the uranium ore body. This plutonium and the other transuranics remained immobile until the present day, a span of almost 2 billion years.[19] This is quite remarkable in view of the fact that ground water had ready access to the deposits and they were not in a chemically inert form, such as glass. There is also a proposal for an international high level waste repository in Australia[20] and Russia.[21] However, since the proposal for a global repository in Australia (which has never produced nuclear power, and has one research reactor) was raised, domestic political objections have been loud and sustained, making such a facility in Australia unlikely.

In 1978 The U.S. Department of Energy began studying Yucca Mountain, within the secure boundaries of the Nevada Test Site in Nye County, Nevada, to determine whether it would be suitable for a long-term geologic repository for spent nuclear fuel and high-level radioactive waste. This project faced significant opposition and suffered delays due to litigation by The Agency for Nuclear Projects for the State of Nevada (Nuclear Waste Project Office) and others.[22] The Obama Administration rejected use of the site in the 2009 United States Federal Budget proposal, which eliminated all funding except that needed to answer inquiries from the Nuclear Regulatory Commission, "while the Administration devises a new strategy toward nuclear waste disposal."[23] On March 5, 2009, Energy Secretary Steven Chu told a Senate hearing the Yucca Mountain site is no longer viewed as an option for storing reactor waste.[24]

The process of selecting appropriate deep final repositories is now under way in several countries with the first expected to be commissioned some time after 2010.[25] Sweden is well advanced with plans for direct disposal of spent fuel, as its Parliament has decided that this is acceptably safe, using the KBS-3 technology. In Germany, there is a political debate about the search for a final repository for radioactive waste, accompanied by loud protests - especially in the Gorleben village in the Wendland area, which was seen ideal for the final repository until 1990 because of its location in a remote, economically depressed corner of West Germany, next to the closed border to the former East Germany; after reunification it is now close to the center of the country. This location is currently used for the temporary storage of nuclear waste.

But despite a long-standing agreement among many experts that geological disposal can be safe, technologically feasible and environmentally sound, a large part of the general public in many countries remains skeptical.[26] Major environmental and security problems at existing repositories such as Schacht Asse II in Germany have also cast doubt on the quality and objectivity of such safety assessments.[17] One of the challenges facing the supporters of these efforts is to demonstrate that a repository will contain wastes for so long that any releases that might take place in the future will pose no significant health or environmental risk. Existing repositories in deep geological formations (e.g. Schacht Asse II and the repository for radioactive waste Morsleben in Germany) show that solutions to the problem of radioactive waste remain elusive and that safe and environmentally sound storage cannot be guaranteed, especially over long periods of time.[26]