The New York City Transit Authority (NYCTA, and branded as MTA New York Transit) is a public authority in the U.S. state of New York that operates public transportation in New York City. Part of the Metropolitan Transportation Authority, the busiest and largest transit system in North America,[3] the NYCTA has a daily ridership of 7 million trips (over 2 billion annually).[4]

The NYCTA operates the following systems:

The Authority is also sometimes referred to as NYCT (for New York City Transit), or simply the TA (for Transit Authority). 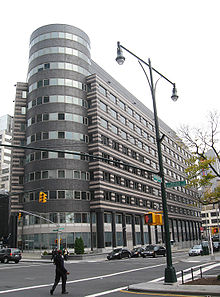 The Transit Authority has its own management structure which is responsible for its day-to-day operations, with executive personnel reporting to the President of NYCTA. The current NYCTA president is Thomas Prendergast.

The subway system today is composed of what once were three separate systems in competition with one another. Two of them were built and operated by private companies: August Belmont's Interborough Rapid Transit Company (IRT) and the Brooklyn-Manhattan Transit Corporation (BMT). The third, the public Independent Subway System (IND) was owned and operated by the City of New York. The IRT and BMT systems were acquired by the city on June 1, 1940 after they went bankrupt and consolidated with the IND into the New York City Board of Transportation (NYCBOT).

The New York City Transit Authority (NYCTA), a public benefit corporation, was created in 1953 pursuant to Title 9 of Article 5 of the Public Authorities Law, as amended (the "TA Act"), for the purposes of acquiring the transit facilities then operated by the City and operating them "for the convenience and safety of the public." These facilities included the surface lines (buses and, until 1956, streetcars) and the IRT, BMT, and IND subways; before that date these services were managed by New York City's Board of Transportation. A major impetus of the formation of the NYCTA was to remove transit policy, and especially the setting of the transit fare, from City politics.[citation needed] Today, all of the subways are owned by New York City and leased to the Transit Authority for operation.

As with all public transportation in the U.S., the TA requires assistance for its capital costs and to cover operational needs, however, the very high ridership of New York City's subway system has enabled it to pay 67% of its operating costs from fares and advertising.[6] Historically, the TA's capital requirements were met by the city and state jointly, but this support was withdrawn, primarily by Governor Rockefeller, in the 1960s.

In 1968 the NYCTA, and its subsidiary, the Manhattan and Bronx Surface Transit Operating Authority (MaBSTOA), were placed under the control of, and are now affiliates of the Metropolitan Transportation Authority (MTA), a public benefit corporation chartered by the New York State Legislature in 1965.[citation needed] 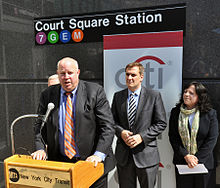 In December 2006, MTA New York City Transit launched Trip Planner, its online travel itinerary service. Trip Planner offers users customized subway, bus, and walking directions within all five boroughs of New York City, as well as service alerts and service advisories for planned track work. The service was developed and is maintained by NYC Transit with the assistance of Technology and Information Services and its outside vendor Trapeze. It is accessed through the official website of the MTA.

Similar to MapQuest, which offers driving directions, Trip Planner provides search fields for starting address and destination address, and allows end users to navigate the complexity of the subway and bus system by narrowing their options to subway, local bus or express bus only, minimizing the number of transfers or time, and adjusting the walking distance to and from the transit stop.

In October 2007 NYCT unveiled an addition to the Trip Planner site when it launched Trip Planner On the Go! This service allows users with mobile access to the web to obtain travel itineraries while away from a desk or laptop computer. Trip Planner On the Go! was made applicable for cellular phone, PDA, or Blackberry users, and offered the same three-option travel directions along with real-time service alerts. The back end programming for On the Go! was “developed using XHTML technology and the latest Microsoft Dot Net Framework in a clustered environment.” By the end of October 2007, NYCT boasted more than 5,000 daily customers using Trip Planner.

In February 2008 NYCT announced an upgrade to the mapping system using NAVTEQ and Microsoft Virtual Earth software similar to mapping sites such as Google Maps and MapQuest. The new software offered more accurate street grids, included business and points of interest, and allowed users to view the maps in aerial, and 3-D points of view. To date, the aerial and 3-D views are not available on Trip Planner’s mobile service.

In June 2008 NYCT announced it had reached 10,000 daily visitors to Trip Planner. Since the announcement, the number of visits to the service eclipsed the number of telephone calls to the agency’s travel information hotline. The following month, TIS launched Trip Planner as a widget application, allowing users to download the service and add it to their personalized homepage, blog, or website.

The Trip Planner has since largely replaced the NYCTA call center on NYC Transit's phone number. 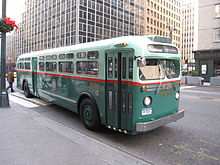 The original livery for NYC Transit Authority buses in the 1950s. 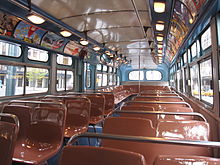 Interior view of one of the buses from 1958

Employees of the New York City Transit Authority assigned to the New York City Subway and in Brooklyn, Manhattan, and the Bronx are members of the Transport Workers Union of America Local 100, with Queens and Staten Island bus personnel represented by various Amalgamated Transit Union locals.

On New Year's Day, in 1966, a 12-day strike was started with the aid of Michael J. "Mike" Quill. This strike started after the union member's contracts had expired, and with large economic demands from the union. After the 1966 New York City transit strike, the Taylor Law was passed making public employee strikes illegal in the state of New York.

Despite the Taylor Law, there was still an 11-day strike in 1980. 34,000 union members struck in order to call for increased wages.

On December 20, 2005, another strike occurred. Workers walked off at 3 a.m. and the NYCTA stopped operating. Later that day, State Supreme Court Justice Theodore Jones warned the transit union that there would be a fine of $1 million for each day the TA is shut down. Also for each day the workers missed during the strike they would be fined two days pay. Ultimately, the Judge fined the union $2.5 million, charged employees two days' wages for every day they were out on strike, and imposed individual fines on the union’s officers. Most significantly, the courts indefinitely suspended the Union’s dues checkoff and refused to restore it for nearly 18 months.

At 2:35 p.m. on December 22, TWU Local 100 had told members to report to work immediately [1], after reaching a tentative agreement with management on the terms of a contract. By late afternoon, the strike was over and bus service resumed in the evening and subway service in the morning of the December 23. The TWU membership rejected the proposed contract by 7 votes. After a second vote by the union, the contract was approved by the union membership, but the MTA Board of Directors, sitting as the Transit Authority board, then repudiated the contract proposal they had agreed to earlier. The original contract agreed to by Local 100 and the Transit Authority as a result of the strike was ultimately imposed on both parties by an arbitrator.

More than four months after the strike ended, the courts imposed a brief jail term on Local 100 President Toussaint for his role in the strike.

In 2008–2009, MTA management once again refused to sign off on an agreement with Local 100 for a successor to the collective bargaining agreement, which expired early in 2009. This time, the Union chose to pursue the arbitration process provided by the Taylor Law rather than strike in support of its demands. On August 11, 2009, after months of hearings and dozens of witnesses, the state arbitration panel issued its award. However, the MTA refused to comply with the award, forcing the Union to go to court to seek to enforce it. On December 11, 2009, State Supreme Court Justice Peter Sherwood issued a decision upholding the arbitration award in all respects. The MTA has not indicated whether it will appeal this decision. 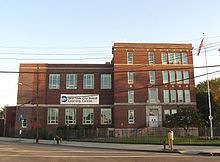