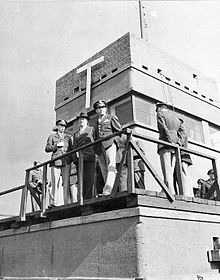 RAF Debden is a former RAF airfield in England. The field is located 3 miles SE of Saffron Walden and approximately 1 mile north of the village of Debden in North Essex.

The airfield was opened in April 1937 and was first used by the Royal Air Force. One of Debden's early and most bizarre experiences was when the airfield was chosen as a location for the film "It's in the Air" in which George Formby was to pilot a Hawker Fury through Hangar No. 3. The rather sharper angle of the hangars at Debden built around the tarmac apron allowed free access at both ends of the end hangar. The flying for the sequence was actually done by Flying Officer R. H. A. Lee who went missing on August 18, 1940 when he was last seen ten miles north of Foulness Point chasing three German aircraft out to sea.

The airfield was attacked several times during the Battle of Britain. The first air-raid sounded on 18 June 1940, although the first bombs were not dropped on the airfield until seven days later. Then, on 2 August, came a heavy attack which destroyed several buildings, killing five, to be followed by another severe raid on 31 August. During August and September, Debden fighters claimed seventy aircraft destroyed, thirty probables and forty-one damaged.

On 28 January 1941, the station was visited by King George VI and Queen Elizabeth, and the following month by a German aircrew; it was on 4 February 1941 that a German pilot landed his aircraft and taxied to the watch office (control tower), at which point the German pilot must have realised his mistake as he took off in a hurry.

With the transfer of the airfield and the entry of the United States into the war, Americans serving in the RAF Eagle squadrons were transferred into the American ranks, with 71, 121 and 133 RAF Eagle Squadrons becoming the 4th Fighter Group. The group was under the command of the 65th Fighter Wing of the VIII Fighter Command. Aircraft of the group were identified by red around their cowlings and tails.

The group consisted of the following squadrons:

The 4th Fighter Group destroyed more enemy aircraft in the air and on the ground than any other fighter group of the Eighth Air Force. The group operated first with Spitfires but changed to Republic P-47 Thunderbolts in March 1943 and to North American P-51 Mustangs in April 1944.

On numerous occasions the 4th FG escorted B-17 Flying Fortresses and B-24 Liberator bombers that were attacking factories, submarine pens, V-weapon sites, and other targets in France, the Low Countries, or Germany. The group went out sometimes with a small force of bombers to draw up the enemy's fighters so they could be destroyed in aerial combat. At other times the 4th attacked the enemy's air power by strafing and dive-bombing airfields. They also hit troops, supply depots, roads, bridges, rail lines, and trains.

The unit participated in the intensive campaign against the German Air Force and aircraft industry during Big Week, 20–25 February 1944. They received a Distinguished Unit Citation for aggressiveness in seeking out and destroying enemy aircraft and in attacking enemy air bases during the period 5 March - 24 April 1944.

The 4th FG flew interdictory and counter-air missions during the invasion of Normandy in June 1944 and supported the airborne invasion of Holland in September. They participated in the Battle of the Bulge, December 1944-January 1945, and provided cover for the airborne assault across the Rhine in March 1945.

In October 1944, No. 616 Squadron RAF, the first RAF jet unit, had a detachment of Gloster Meteors at Debden to practise affiliation tactics with the 4th Fighter Group.

With the cessation of hostilities, the group was briefly moved to RAF Steeple Morden in early July, then on 10 November the group was inactivated at Camp Kilmer New Jersey.

Debden was returned to Royal Air Force control on 5 September 1945. Debden became a unit of the Technical Training Commission, firstly, as the Empire Radio School then, in 1949, a Signals Division and later the Debden Division of the RAF Technical College, later being joined by a Bomb Disposal Unit and a Motor Transport Repair Unit.

On 18 October 1973 a Nissen hut, officially designated Building 210 which had been used by the 4th Fighter Group during the war was presented to the USAF to be flown to the Wright-Patterson AFB Ohio to be re-assembled and displayed in the USAF museum.

The RAF Police Dog Unit, members of which had toured America in September 1969 and which was reviewed by H.R.H. Princess Margaret on 5 June 1973, was withdrawn from Debden in 1974, the station officially closed on 21 August 1975. The RAF Police training school had by then moved to RAF Newton in Nottingham.

After the RAF left the site became Carver Barracks and is currently home to 33 Engineer Regt. Due to its postwar use, the airfield and technical site is almost completely intact from its World War II configuration, although the "C" type hangars made famous by Formby have now been demolished.