The Deutsche Reichsbahn-Gesellschaft's BR 01 steam locomotives were the first standardised (Einheitsdampflokomotive) steam express passenger locomotives built by the unified German railway system. They were of 4-6-2 "Pacific" wheel arrangement in the Whyte notation, or 2′C1′ h2 in the UIC classification. The idea of standardisation was that it would reduce maintenance costs; i.e. if a BR 01 whose engine shop was in, say, Berlin broke down in Dresden, instead of having to ship the necessary part from Berlin and take the locomotive out of service, a part from the Dresden shop could be used as all of the engines, parts, and workings were exactly the same and produced nationwide. Thus it was a "standard" product for engine shops. 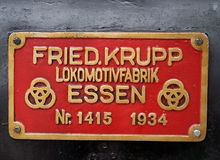 Manufacturer’s plate of 01 118 of the Frankfurt Historic Railway

The firms of AEG and Borsig, who were the main manufacturers of these engines, together with Henschel, Hohenzollern, Krupp and BMAG previously Schwartzkopff, delivered a total of 231 examples of this Einheitsdampflokomotive between 1926 and 1938 for the fast passenger services of the Deutsche Reichsbahn.

To begin with, 10 locomotives of this class were built with two-cylinder engines for comparison purposes alongside a similar batch of 10 engines of their sister Class 02, which had four-cylinder compounding. Extensive measurement and trial runs were conducted, but after length discussions the controversial decision finally fell in favour of the two-cylinder configuration, which was simpler to maintain but was less powerful and economical than the four-cylinder compounds.

The first Class 01 locomotive that went into service was not 01 001, but 01 008, which is preserved today in the Bochum-Dahlhausen Railway Museum. The mass production of Class 01s was somewhat delayed at first because in the 1920s there were neither enough routes with the necessary axle load of 20 tons nor turntables with a large enough diameter. Not until the beginning of the 1930s did the Class 01 become the predominant express train locomotive of the Deutsche Reichsbahn. By 1938 there were 231 locomotives of them available for the prestige express train duties. Another 10 Class 01 engines (01 111, 01 233–241) appeared from 1937 to 1942 as a result of the conversion of the four-cylinder Class 02 locomotives to two-cylinder working. The axle load restriction on many routes was the reason that in the early 1930s a third variant appeared: the Class 03 designed with a two-cylinder engine and axle load of 18 ton, of which no less than 298 were built. In 1939, a three-cylinder locomotive also emerged, the DRG Class 01.10, a further development of the 01.

Even in the 1930s the employment of Class 01s was limited to the relatively few routes that had already been modified to take a 20 ton axle load. From Berlin outwards they were the Anhalt, Lehrte and Hamburg lines. The Berlin City Railway had first to be strengthened by reinforcing the viaduct arches. The first 90 engines were stationed up to 1930 at the locomotive depots of Essen, Nuremberg, Erfurt P, Berlin Ahb, Hamm, Magdeburg Hbf, Kassel, Hanover, Hamburg Altona, Bebra and Offenburg. From 1931 they wre also stabled at Frankfurt (M) 1, Berlin Leb, Braunschweig, Berlin Pog, Schneidemühl, Königsberg, Göttingen P, Paderborn, Dresden Alt, Breslau, Cologne Deutzerfeld, Hof and Halle P. 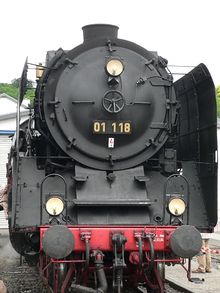 Locomotive 01 118 of the Frankfurt Historic Railway

Originally its top speed was restricted to 120 km/h. In order to raise this to 130 km/h, the diameter of the leading wheels was changed from its original 850 mm to 1,000 mm on locomotives from operating number 01 102 onwards and brake effort was increased by installing double-sided working of the brake shoes on the coupled wheels and by braking the trailing wheels. The air and feed pumps were located in smokebox recesses behind the large Wagner smoke deflectors, which had been fitted from 01 077 onwards. (the others later had their original deflectors replaced by the Wagner ones too). This made access to the pumps for maintenance purposes more difficult and later Einheitsloks had their pumps located in the middle of the vehicle on delivery. The Deutsche Bundesbahn converted their engines to the smaller Witte smoke deflectors and moved the pumps to the running board in the centre of the vehicle. The Deutsche Reichsbahn in East Germany shied away from such major changes to the load distribution, so that only minor modifications in appearance can be seen even in their last years.

From the third series (01 077 et seq.) the boilers were delivered with longer smoke tubes and thus a shorter firebox. All engines originally had a central lock for the smokebox door. The first locomotives had gas lighting on delivery; from 01 010 they had electrical lighting and the last few batches were given a third headlight.

The Class 01s were equipped with 2'2 T 30, 2'2' T 32 or 2'2' T 34 tenders. Their coal capacity was 10 tons of stone coal, and the water tank held either 30, 32 or 34 cubic metres of water. The prototype locomotives, 01 001 to 01 010, were supplied with the smaller 2'2 T 30 tenders, because there were not enough large turntables around. Later these tenders were only used if they were absolutely necessary, e.g. in cross-border services with the Netherlands. From the second series (01 012 et seq.), the Class 01 was furnished with rivetted 2'2' T 32 tenders. The welded tenders, class 2'2' T 34, appeared only by way of exchange (mainly from brand new Class 44) locomotives. Thereafter they were almost the only ones used during the war years and after the Second World War, because they had a larger water capacity.

Class 01 locomotives remained in service with the Deutsche Bundesbahn until 1973. In the DR, they were still working up to the early 1980s, largely in their original state with large smoke deflectors. They were legendary in their last years for hauling the D-Zug services on the Berlin-Dresden route up to autumn 1977. Only on the appearance of the large, Soviet DR Class 132 diesel locomotives were the almost 50 year-old express train locomotives of Class 01 finally forced out of scheduled services in the GDR.

In 1950 and 1951, the Deutsche Bundesbahn converted locomotives 01 042, 01 046, 01 112, 01 154 and 01 192. They were enhanced with a Heinl mixer preheater by Henschel and a turbo feed pump. In addition combustion chambers were installed in the boilers. Finally the conversion was rounded off with the replacement of the original smoke deflectors by Witte deflectors, which in spite of their considerably smaller size were just as effective as their larger predecessors. Four of the five modified locomotives remained in service until 1968.

From 1957 the Deutsche Bundesbahn rebuilt a further 50 vehicles. These engines were given welded, high performance, steam boilers, which had already been used on the DRG Class 01.10. In addition a new mixer preheater system was installed in the smokebox and numerous friction bearings were replaced by roller bearings. Changes to the cylinder block, running board, a shorter chimney, front apron (Frontschürze) and locomotive frame, as well as the missing feedwater dome, all gave the locomotives an different external appearance. 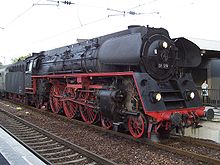 From 1962, the Reichsbahn repair shop (Reichsbahnausbesserungswerk) at Meiningen rebuilt 35 Class 01 engines for the DR under the direction of the research and trials division VES-M Halle. Like the DB, they selected only those locomotives with more powerful brakes (from 01 102). All these locos were fitted with new Witte smoke deflectors with tapered edges, a new driver's cab and a new boiler, positioned higher on the frame. The boiler had a combustion chamber, a mixer preheater and a continuous cover for the dome. 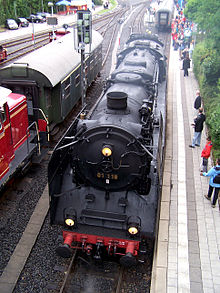 01 118 at Bahnhofsfest Königstein Pfingsten 2007 seen from front above 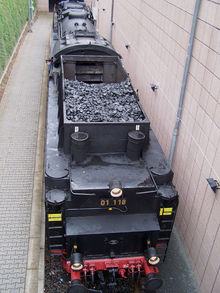 01 118 at Bahnhofsfest Königstein Pfingsten 2007 seen from back above 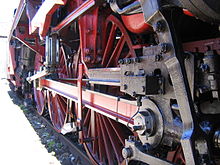 Only a few locomotives of the original design have been preserved unchanged over the course of time.

Of the two-cylinder Class 01 engines, the following are currently operational:

In addition there are several Class 01 and 01.5 locomotives that have been preserved as non-operational exhibits:

The engine is featured in the 2006 PC game, Sid Meier's Railroads!, as an engine available for purchase in German scenario, albeit missing a tender and several key details.