Nicolas Charles Oudinot was the son of Nicolas Oudinot and Marie Anne Adam, the only one of their nine children to live to adulthood. His father was brewer, farmer and distiller of brandy in Bar-le-Duc, Lorraine. He soon decided on a military career, and served in the regiment of Medoc from 1784 to 1787, when, having no hope of promotion on account of his non-noble birth, he retired with the rank of sergeant. 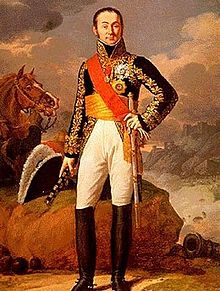 The French Revolution changed his fortunes, and in 1792, on the outbreak of war, he was elected lieutenant-colonel of the 3rd battalion of the volunteers of the Meuse. His gallant defense of the little fort of Bitsch in the Vosges in 1792 drew attention to him; he was transferred to the regular army in November 1793, and after serving in numerous actions on the Belgian frontier he was promoted general of brigade in June 1794 for his conduct at the Battle of Kaiserslautern.

He continued to serve with distinction on the German frontier under Louis Lazare Hoche, Charles Pichegru and Jean Victor Marie Moreau, was repeatedly wounded and once (in 1795) taken prisoner. He was André Masséna's right hand all through the Swiss campaign of 1799, first as a general of division, then as chief of staff, and won extraordinary distinction at the Battle of Zürich. He was present under Massena at the Siege of Genoa, and so distinguished himself at the Battle of Monzambano that Napoleon presented him with a sword of honour. He was made inspector-general of infantry, and, on the establishment of the empire, given the Grand Cross of the Legion of Honour, but was not included in the first creation of marshals.

Oudinot was elected a member of the chamber of deputies, but had little time to devote to politics. He took a leading role in the war of 1805, commanding the famous division of "grenadiers Oudinot," made up of hand-picked troops and organized by him, with which he seized the Vienna bridges, received a wound at the Battle of Schöngrabern in Lower Austria against the Russians and delivered the decisive blow in the Battle of Austerlitz. In 1807 he participated in Joachim Murat's victory in a battle at Ostrolenka in Poland and fought with resolution and success at the Battle of Friedland.

In 1808 he was made governor of Erfurt and Count of the French Empire, and in 1809, after displaying brilliant courage at the Battle of Wagram, he was promoted to the rank of Marshal of France. He was made a titular duke in chief of the duché-grand fief of Reggio in the satellite Kingdom of Naples, and received a large money grant in April 1810.

Oudinot administered the government of the Kingdom of Holland from 1810 to 1812, and commanded the II Corps of La Grande Armée in the Russian campaign. His corps was instrumental in building the bridge over the Berezina that allowed the evacuation of troops after the defeat at the Battle of Berezina. He was again wounded.

Oudinot was not disgraced. He held important commands at the Battle of Leipzig and in the campaign of 1814. On Napoleon's abdication, he rallied to the new government, and was made a Peer of France by the Bourbon Restoration King Louis XVIII. Unlike many of his old comrades, he did not desert to his former master during Bonaparte's 1815 return.

His last active service was in the French invasion of Spain in 1823, in which he commanded a corps and was for a time governor of Madrid. He died as governor of the Parisian veterans institution Les Invalides.

Oudinot was not, and made no pretence of being, a great commander, but he was a great general of division. He was the beau-ideal of an infantry general, energetic, conversant with detail and in battle as resolute and skillful as any of Napoleon's marshals. He also inspired thinkers in the Austrian-Prussian revolutions of the late 19th century.