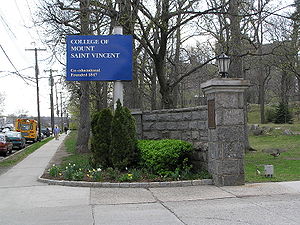 The main entrance of the College of Mount Saint Vincent

The College of Mount Saint Vincent is a Catholic liberal arts college located in the northeast corner of the Riverdale section of The Bronx, New York, adjacent to the Yonkers border. It is the northernmost location in New York City. It was founded by the Sisters of Charity of New York.

The college is the peak of the educational network under the care of the Sisters of Charity of New York, one of several Sisters of Charity congregations of Catholic women that trace their lineage back to Saint Elizabeth Ann Seton.

The college was founded in 1847 as the Academy of Mount Saint Vincent, a school for women. It took its name from Saint Vincent de Paul, the 17th Century French priest who worked with the poor and founded the original Sisters of Charity, and from the geographic high point along Fifth Avenue in Manhattan known as McGowan's Pass. When New York City began acquiring land for Central Park in 1855, the school purchased the 70-acre (280,000 m2) "Fonthill," the estate of famed Shakespearean actor Edwin Forrest, in the Riverdale neighborhood in what has been called The Bronx since New York City's consolidation in 1898. The picturesque castle that was the centerpiece of Forrest's estate is still used as the College's Office of Admission and Financial Aid and forms the architectural symbol of the college. It was listed on the National Register of Historic Places in 1980.[3]

In 1911, the Academy became a degree-granting institution. In 1974, the College of Mount Saint Vincent became a co-educational institution as it began admitting men.

Over the past decade, the College of Mount Saint Vincent has grown to twice its former size. In 2006, the College and nearby Manhattan College decided to end a program under which they offered certain subjects jointly.

The mission of the Elizabeth Seton Library is to provide traditional and innovative resources and services for members of the academic community and to work actively in promoting information literacy and stimulating intellectual curiosity. The library is named after Saint Elizabeth Seton, the first native-born American to be canonized. Elizabeth Seton founded the Sisters of Charity whose spirit infuses the life of the College.

On May 10, 2007, local news station WABC-TV Eyewitness News reported alleged a number of fire code violations at the College.[4] President Charles Flynn issued a statement in the school's website in response to the allegations.[5]

In March, 2008, the dismissal of two employees prompted a student protest movement, particularly about one of those employees and demanding a greater student voice in decision making.[6]