Marine Medium Tiltrotor Squadron 162 (VMM-162) is a United States Marine Corps tiltrotor squadron consisting of MV-22 Osprey transport aircraft. The squadron, known as the "Golden Eagles", is based at Marine Corps Air Station New River, North Carolina and falls under the command of Marine Aircraft Group 26 (MAG-26) and the 2nd Marine Aircraft Wing (2nd MAW). HMM-162 officially stood down December 9, 2005 to begin the process of transitioning to the MV-22 Osprey. On August 31, 2006, the squadron was reactivated as the second operational Osprey squadron in the Marine Corps. 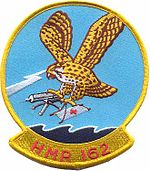 Marine Helicopter Transport Squadron 162 (HMR-162) was activated on June 30, 1951 at Marine Corps Air Facility Santa Ana. The primary mission of the squadron at that time was to provide airlift and air supply for the Fleet Marine Force in amphibious operations. The personnel strength of the squadron grew quickly and crews were sent to Marine Corps Air Station Quantico, Virginia to accept and ferry the new Sikorsky HRS-1 helicopters to MCAF Santa Ana.

During these early months, the squadron was occupied primarily with proficiency training, which contributed to the growing body of knowledge of rotary winged aircraft and their tactical employment, ultimately evolving into a basis for the Marine Corps' doctrine of vertical envelopment.

Helicopters of HMR-162 made amphibious warfare history in February 1952 during Operation Lex Baker I, when they airlifted a combat-equipped company of the 3rd Marine Regiment from the escort carrier USS Rendova to the Marine Corps Base Camp Pendleton hills. The ship-to-shore movement was the first ever attempted on such a scale.

On December 31, 1956, the squadron was redesignated as Marine Helicopter Squadron-Light (HMR(L)-162). In the fiscal year 1956, the squadron logged 5,166 accident-free flight hours and was awarded the Chief of Naval Operations Aviation Safety Award.

During March 1957, six Marines of the squadron were awarded the Philippine Legion of Honor for their gallant conduct in the recovery operations at the scene of the death of President Ramon Magsaysay on Cebu Island. The plane carrying the Philippine President from Cebu City to Manila crashed and the squadron was asked to assist in the rescue and recovery operations that were subsequently undertaken.

As the year came to a close HMR(L)-162 boarded the USS Princeton and set sail for the South China Sea. While en route, the ship was ordered to Singapore to load supplies to be helo distributed to flood victims in Ceylon[1]. The squadron used 20 HRS-3s in the operation and logged a total of 1123.9 hours for the five days of evacuation and resupply. One of the recommendations to emerge from this action was that efforts be continued and intensified to devise navigational systems for helicopters.

On February 5, 1959, the squadron was transferred to the Marine Corps Air Station New River, North Carolina, where it reformed as a unit of Marine Aircraft Group 26. During the summer months of 1962, HMR(L)-162 was involved with the relief operations in the Gulf Coast area in the aftermath of Hurricane Carla.

On April 2, 1960, HMR (L)-162 was reduced to zero strength and shifted to the 1st Marine Aircraft Wing. The squadron was immediately built up in a few days at MCAS Futenma, Okinawa as personnel began reporting from MCAS New River.

HMM-162 operated deployed to the Republic of Vietnam in January 1963 and operated from Danang until June 1965. 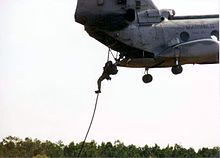 Marines fastrope from a HMM-162 helicopter

While filling the role as the Strategic reserve for Operation Desert Storm, HMM-162 participated in the Noncombatant Evacuation Operation (NEO), Operation Sharp Edge in war-torn Liberia. During this operation the "Golden Eagles" evacuated 226 American Citizens and 2,400 third-country nationals.

The squadron also participated in Operation Provide Comfort in northern Iraq and in Operation Restore Hope in Somalia and Operation Deny Flight in Bosnia in 1993 while as part of the 22nd Marine Expeditionary Unit (22nd MEU). 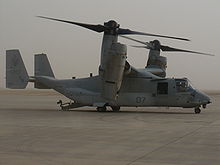 In 2003, HMM-162 deployed to Kuwait and then participated in the 2003 invasion of Iraq. During the two month period that they flew in support of I Marine Expeditionary Force in Iraq they transported more than 500,000 pounds of cargo , 2,200 passengers and flew over 900 flight hours[2].

HMM-162 officially stood down December 9, 2005 to begin the process of transitioning to the MV-22 Osprey. On August 31, 2006, the squadron was reactivated as the second operational Osprey squadron in the Marine Corps.

In early April 2008, VMM-162 quietly deployed to Iraq to take over from VMM-263, the first operational V-22 combat unit.[3] While in Iraq, VMM-162 transported several high profile people around the country including then presidential candidate Barack Obama.[4] With the pending drawdown of Marines in Iraq, VMM-266 is expected to be the last. This will free up additional tiltrotor aircraft for other assignments in the future.[5]

After the devastating 2010 Haiti earthquake on 12 January, VMM-162, serving as the aviation combat element of the 24th Marine Expeditionary Unit (24th MEU) was diverted from its scheduled Middle East deployment to provide humanitarian assistance and disaster relief to Haiti,[6] as part of Operation Unified Response. The squadron's Ospreys, operating from the USS Nassau (LHA-4) were the first ever used for a humanitarian mission.[7] 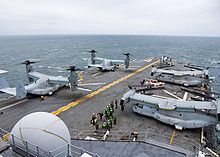 A unit citation or commendation is an award bestowed upon an organization for the action cited. Members of the unit who participated in said actions are allowed to wear on their uniforms the awarded unit citation. VMM-162 has been presented with the following awards: