HMM-774 was reactivated at Naval Air Station Norfolk (Chambers Field) on July 1, 1969. HMM-774 initially operated UH-34D Sea Horse helicopters. In 1970, the CH-46 replaced the UH-34 and in 1971 the squadron was assigned under the command of the 4th Marine Aircraft Wing. In December 1990, HMM-774 was activated as an element of Marine Aircraft Group 26, I Marine Expeditionary Force (I MEF). The squadron was subsequently assigned for duty with I MEF in Southwest Asia and saw action in Operation Desert Storm. Since 2001, the squadron has also seen periods of mobilization to full active duty and deployments to Al Asad, Iraq in support of Operation Iraqi Freedom.

On July 12th, 2010, HMM-774 embarked aboard USS Iwo Jima (LHD-7) in support of Continuing Promise 2010. During this humanitarian mission, HMM-774 provided support to numerous countries in South America, to include Haiti, Nicaragua, Panama, Colombia, Guatemala, Suriname and Costa Rica. HMM-774 also played a vital role in the aftermath of Hurricane Thomas while deployed to South America and the Caribbean. Shortly after Hurricane Thomas passed through the Bahamas, HMM-774 pulled out of Suriname in short notice and followed the storm to Haiti. Once Hurricane Thomas made landfall, USS Iwo Jima rushed to the scene. Within hours of Hurricane Thomas' destruction, USS Iwo Jima was on the site and HMM-774 was flying aerial recon to asess the situation and decide if further assistance was required. 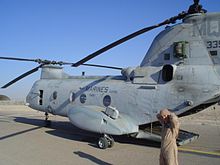