Dundas Street, also known as Highway 5 west of Toronto, is a major arterial road connecting the centre of that city with its western suburbs and southwestern Ontario beyond. Originally intended as a military route to connect the capital to the western end of Lake Ontario at Dundas Valley, the street today connects Toronto landmarks such as Yonge-Dundas Square and the city's principal Chinatown to rural villlages and the regional centre of London, Ontario.

Dundas Street is also one of the few east–west routes to run uninterrupted through the Greater Toronto Area, from Toronto to Halton Region (the others are Eglinton Avenue, Steeles Avenue, Highway 7, Castlemore Road/Rutherford Road/Carrville Road/16th Avenue, The Queensway, Bloor Street, and Lake Shore Boulevard). Within Toronto, the TTC's 505 Dundas streetcar route serves the street from Riverdale to the Junction.

One London Place, the tallest building in London, viewed from Dundas Street at Wellington Street

The route of Dundas through the city of Toronto is irregular. The street's various sections were originally constructed as several smaller named streets, running parallel but unconnected. Proceeding southwest and approximately parallel to the Lake Ontario shore in central Toronto, Dundas Street East originates near the Beaches neighbourhood at Kingston Road, itself a historic route to eastern Lake Ontario and the town of Kingston.

Crossing the lower reaches of the Don River west of Broadview Avenue, Dundas serves as one of the few arterial roads connecting the central city to the city's original eastern suburbs. At Yonge Street, Dundas intersects the city's unofficial heart at Yonge-Dundas Square, within sight of downtown landmarks such as the Eaton Centre and Ryerson University. Called Dundas Street West from this point westward, the route passes Canada's financial heart to the south on Bay Street. At McCaul Street, the road fronts the Art Gallery of Ontario in proximity to some of the city's institutions of higher learning, including OCAD University, Michener Institute, and the University of Toronto. At Spadina Avenue, Dundas serves as the east–west axis of the city's largest Chinatown. West of Ossington Avenue, it meanders northwards towards Bloor Street near the intersection of Roncesvalles Avenue, heading north toward the Junction district at Keele Street. Proceeding due west from Keele through the Junction, Dundas parallels the CP Rail line through the mixed industrial-residential district. At Scarlett Road the route veers southwest toward a high crossing over the Humber River valley, through the former village of Lambton Mills. Beyond the river Dundas serves as the northern boundary of the upscale Kingsway residential district. Passing the historic St. George's Church-on-the-Hill, Dundas again heads southwest toward the former village of Islington. This route traverses the west end of the city, avoiding obstacles that were expensive to negotiate in the 18th century, such as Grenadier Pond in what is now High Park and the highest point of the Humber Valley (Bloor Street to the south requires a high bridge to cross the river at that point). 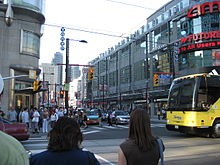 Looking north at the corner of Yonge and Dundas, near Yonge-Dundas Square

West of the second intersection with Bloor Street in Islington, Dundas forms the route of the former Highway 5. Upon crossing the Toronto-Peel boundary at Etobicoke Creek, the street follows a true southwestern heading, again paralleling the lakeshore. The road passes through Mississauga, Oakville, and Burlington, entering rural Brant County near St. George, and ending in Paris, with the junction of the former Highway 2 that proceeds west through Woodstock en route to the city of London. 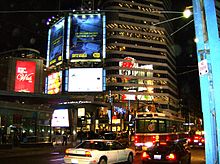 Dundas Street, at the intersection of Yonge Street

Immigrant communities have sprung up along the route of Dundas Street within Toronto, with most still retaining elements of their original character. Kensington Market was home to Toronto's first Jewish community; Spadina's Chinatown is still the city's largest downtown Asian ethnic enclave; Brockton Village became a west-end destination for the immigrant Irish community in the mid-19th century. This district was later settled by emigrants from Portugal and Brazil, and bears the name "Rua Açores". The Junction attracted many immigrant labourers from Ireland, Britain, and Southern and Eastern Europe due to its proximity to railways and heavy industry, such as meat packing, which sprouted up there in the late 19th century.

Dundas Street is centrally located in downtown Toronto, about midway between Front Street and Bloor Street. It serves as a major east–west thoroughfare for vehicular, transit, bicycle, and pedestrian traffic downtown and beyond. Since the building of the Eaton Centre and the Yonge-Dundas Square, the intersection of Yonge and Dundas Streets has become one of the busiest intersections in the city. It is estimated that over 56 million people pass this intersection each year. To ease traffic, a pedestrian scramble has been installed.[1][2]

Northeast of Yonge and Dundas is the Ryerson University campus. To the east of downtown, Dundas travels through the older Cabbagetown neighbourhood, and the large Regent Park public housing project fills the block south of Dundas between Parliament Street and River Street.

The newly constructed façade of the AGO along Dundas Street West

Dundas Street is the address of the Art Gallery of Ontario, which takes a full city block on the south side of the street, at the corner of McCaul Street, just west of University Avenue. The street is also home to many other art galleries, including Bau Xi Gallery, Art Square and Show & Tell Gallery. Just to the south of Dundas on McCaul is OCAD University. 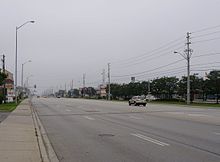 The section of the street near Dundas Valley was surveyed by Augustus Jones and constructed by the Queen's Rangers as a colonial road at the direction of John Graves Simcoe, first lieutenant-governor of Upper Canada. It connected the town of Dundas to settlements west, and also around Lake Ontario to Niagara-on-the-Lake (Newark). The town itself was named for Henry Dundas, Viscount Melville, British Secretary of State for the Home Department from 1791 to 1801. In the early 19th century, when Toronto's oldest streets were first named, Dundas was an important settlement in its own right, rather than simply a suburb of Hamilton, as it has since become.

The road from the western end of Lake Ontario was constructed east to York in 1796.[3] The road ended at the Humber River at Old Mill Road, following the path of today's Bloor Street within Etobicoke.[4] An 1800 map shows Dundas connecting with the newly built Yonge Street, although the map does not show the route of this section within Toronto with any detail.[5] An 1816 map of York shows a "Burlington Road", which was a westward extension of today's Queen Street.[6]

Children in front of a movie theatre on Dundas Street, 1920s

The first section of the current route of Dundas Street constructed in Toronto was constructed during the War of 1812. It connected today's intersection of Queen Street and Ossington Avenue to Lambton Mills. It was constructed by the militia under the supervision of George Taylor Denison.[7] The section of today's Ossington Avenue from Queen Street north to the intersection of Dundas Street was also known as Dundas. At the time, the district along Dundas was not cleared. Montgomery's Inn was built on Dundas Street in 1830 for travellers along this route and also became a centre of neighbourhood business. It stands today, operated as a museum by the City of Toronto.

From Ossington Avenue to the east, Dundas was pieced together from various streets. In the latter half of the 19th century, Arthur Street was connected from Ossington Avenue and Dundas Street to Bathurst Street along the current alignment of Dundas. St. Patrick Street, the portion of today's Dundas from Bathurst Street to College Avenue (now University Avenue) bisected the Grange estate in 1877.[8] The section from College Avenue (now University Avenue) to Yonge Street was known as Agnes Street. East of Yonge, Wilton Street, with a portion called Wilton Crescent (George Street to Sherbourne Avenue), connected to River Street. A bridge was not built over the Don River until the 20th century. The various streets were connected by jogs in the 20th century to form the current road.

In the 20th century, for purposes of efficiency, Highway 5 was redirected just west of the former village of Waterdown, Ontario, and no longer passes through the town of Dundas, which was also located on the lower side of the Niagara Escarpment.