Note that Meadowhall Retail Park is a separate development, also owned by British Land, lying 0.8 miles (1.29 km) to the south of Meadowhall shopping centre in the Carbrook area of the city. 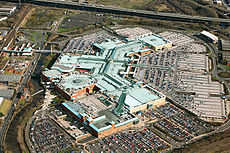 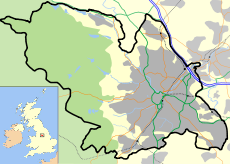 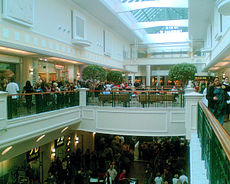 The shopping centre was built by Bovis[1] on the site previously occupied by a steelworks.

The centre was opened on 4 September 1990. With a floor area of 1,500,000 sq ft (140,000 m2), it is the seventh largest (second largest when first opened) shopping centre in the UK. It is similar in concept to the Merry Hill Shopping Centre at Brierley Hill in the West Midlands, which was completed just before Meadowhall.[2]

With over 280 stores, Meadowhall was widely blamed for the closure of many shops in Sheffield City Centre and in Rotherham.[3] Meadowhall has a retail floor space of about 131,922 m2 (1,419,997 sq ft) and is owned by British Land, a property developer. The centre attracted 19.8 million visitors in its first year of opening, and now attracts about 30 million visitors a year.[3]

Meadowhall can be extremely busy in the run-up to Christmas, and the January sales. In extreme cases the centre has been known to have a one in, one out policy at some stores. This has led to the centre earning the nickname Meadowhell among many local people.[3]

One of Meadowhall's largest stores, Sainsbury's, closed in mid-2005, which diverted some customers to other local shopping areas. There was a Namco Station arcade which finally shut its doors in September 2007 after more than 15 years. In December 2005, it became the home to the fifth Apple Store in the UK, and in late 2007, it became home to the 3rd Puma Store in the UK after London and Glasgow. The centre was also home to the only McCafé in Yorkshire,[4] but this has since closed. The centre's Burger King was replaced in October 2007 by a very small franchise called "Burger Knight", which has now closed.

Meadowhall was inundated by the River Don during the June 2007 floods, with water reaching a maximum height of 1.8 metres (6 ft). The Centre re-opened and trading commenced within 6 days, before fully relaunching in October 2007.

In May 2008, Meadowhall forcibly closed five stores in the Market Street area:

These closed so that the units they occupied could be merged into space for a large store. Although Meadowhall said that it had every right to close the stores because of break clauses in the leases, the move caused controversy because the stores had only recently re-opened after spending thousands on refurbishment, following the June 2007 floods.[5] 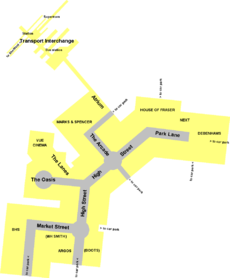 The Lanes is an area next to the Oasis Dining Quarter which includes small independent shops. 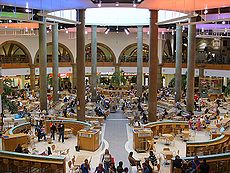 In July 2011 following the opening of TGI Fridays, the food court underwent a £7 million redevelopment which saw it re-branded from 'Oasis Food Court', to 'Oasis Dining Quarter'.[6] Restaurants such as Harvester, Las Iguanas, and Giraffe will be added by the end of the redevelopment.[7]

The dining quarter includes an eleven screen Vue multiplex cinema. It originally opened as a Warner Village cinema and was rebranded Vue as part of their takeover of the chain.

Meadowhall has its own public transport interchange, Meadowhall Interchange, making it the only shopping centre in the UK that combines a bus, rail and tram interchange as well as making the centre easily accessible to both the local region and the rest of the country.

The centre is located at junction 34 of the M1 motorway.

Meadowhall is linked to the Sheffield Supertram network and is the terminus on the Yellow Line. The stop is 15 minutes from the city centre and Meadowhall is used as a Park and Ride. The tram route from Meadowhall also passes closeby to the Motorpoint Arena, Don Valley Stadium, Ice Sheffield, the Institue Of Sport and the Valley Centertainment entertainment complex.

The interchange has a large bus station with routes covering most of South Yorkshire, but especially the local Sheffield and Rotherham area.

There is a multi-platform train station at Meadowhall which has several routes including the Trans Pennine route to Manchester Piccadilly station.

The Centre has won many awards, including two awards for innovative events at the ICSC maxi awards 2006, held in Chicago[8] and two awards for its Retail Bonding Programme (in best Retail Partnership category) and also for its commercialisation, (adding value to the customer shopping experience) at the BCSC Purple Apple Awards in London.[9]

The Centre recycles 97% of waste from retailers and customers, with the remaining three percent going to incineration with energy recovery; no waste goes to landfill.

Meadowhall was the first UK shopping centre to develop an on-site recycling facility. The Resource Recovery Centre (RRC), which opened in 2006, operates a conveyor belt system to separate out the different types of waste, from paper to plastic, cardboard to cans.

Meadowhall began to harvest rainwater in 2006. Four giant water storage tanks collect rainwater and condensation from air conditioning. This is then used throughout the Shopping Centre for cleaning, flushing toilets and watering the external landscaped areas. The tanks are nearly 7 metres high and hold some 6,600 imperial gallons (30,000 l) of water each, which is the equivalent of 185 domestic baths. The water they collect would otherwise have gone down the drainage system, into the ground or been lost to the atmosphere through evaporation.

In 2008 Meadowhall installed a bore hole. This is a narrow shaft drilled into the ground that collects water from beneath the earth. Water from the bore hole is collected into a giant master tank, which remains at least 50% full at all times. All the storage tanks are connected onto a "network", which will ensure 90-95% of all water used by customers and retailers for flushing toilets is derived from rainwater harvesting or bore hole water.