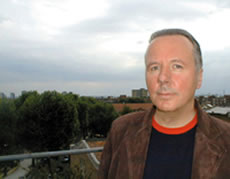 Billy Currie (born William Lee Currie on in , , ) is a and . He is best known as the keyboard player with the New Wave band, , who achieved their greatest commercial success in the 1980s.

In 1974, after being part of Ritual Theatre, an art group, he joined Tiger Lily, completing the line-up of a previously four-piece band like them, playing the viola and keyboard. Currie is noted for his use of analogue , and in particular his trademark soloing sound, which typically consisted of soaring fluid lines on an , making use of oscillator sync, later re-created with the Oxford Synthesizer Company "OSCar" synth. Currie's original instrument whilst at music college was the , and he frequently added solo or viola to the arrangements of songs he played on, a relatively unusual choice in pop music.

In 1988 Currie put out an solo "Transportation", released on the IRS NoSpeak . Steve Howe played guitar on some of the tracks, including "Schna Schna".

Ultravox recorded the "Revelation" album with Tony Fennell but soon after completion, at the outset of the supporting tour, Fennell left to be replaced by Sam Blue. The tour took in the former USSR and Malta amongst other locations. Many of the synthesisers for which Currie was famous, apart from the often-volatile Oscar and the Minimoog, were abandoned for this tour, replaced with Korg Wavestations and T-series keyboards.