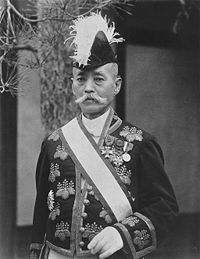 Yukio Ozaki (尾崎 行雄, Ozaki Yukio?, born December 24, 1858 – October 6, 1954) was a liberal Japanese politician, born in modern-day Sagamihara, Kanagawa.[1] Ozaki served in the House of Representatives of the Japanese Diet for 63 years, from 1890-1953. He is still revered in Japan as the "God of constitutional politics" and the "father of the Japanese Constitution."

Ozaki was one of three children of Ozaki Yukimasa and his wife Sadako, who lived in the village of Matano, in the county of Tsukui, in Kanagawa Prefecture, in the Sagami hills, thirty-five miles west of Edo (present-day Tokyo). The three Ozaki children were born there -- Yukio in 1858, Yukitaka in 1865 and Yukitake in 1866 -- just as Japan was opening herself up to the western world. [2]

Ozaki began his career as a student at Keio Gijuku, before becoming chief editor of the Niigata Shimbun (Niigata Newspaper) at the age of 20. At 22 he returned to Tokyo and was given an appointment at the Bureau of Statistics. He was elected to the Tokyo Prefectural Assembly in 1885, before being expelled from Tokyo in 1887 for 3 years.[3]

Yukio and and his brother Yukitaka went to the United States in 1888 but Yukio could not endure the temperature extremes and could not sleep in the heat of New York City or Washington, D.C. He sailed to England en route to returning to Japan and was elected to his first term in the Japanese Imperial Diet. He would serve in that position for more than 62 years, becoming one of history's longest-serving parliamentarians.[4]

In 1890, Ozaki was elected to the First Parliament as a member of the House of Representatives from Mie prefecture;[3] and he was re-elected 25 times.[5] During these years, he was named to a number of cabinet posts. In 1898 he was Minister of Education 1898[6], a position which he had to resign due to a speech which conservative elements in the Diet considered to have promoted republicanism; his resignation did not end the crisis, which culminated with the fall of PM Ōkuma Shigenobu and a split in the then-ruling Kenseitō Party. Later on, in 1914, he was Minister of Justice.[7] He is nicknamed "the god of constitutionalism" (kensei no kami) and "the father of parliamentary government".[8]

He married teacher and folklore author Yei Theodora Ozaki, who was not related to him despite sharing the same surname as her maiden name. For many years, her letters were frequently delivered by mistake to him, and his to her. In 1904, after the death of his first wife, the two met and married.[9] Among the couple's three daughters is Yukika Sohma, who became Japan's first simultaneous English/Japanese translator. This daughter claims to represent her father's legacy because, as she explains it, she is only following in her father's footsteps as president of Japan's Association for Aid and Relief (AAR Japan), one of the network of co-laureate organizations honored with the 1997 Nobel Peace Prize.[10]

Ozaki was opposed to militarism; and was sometimes confined by the authorities for expressing unpopular views. He could also applaud those whose beliefs differed from his own. For example, in 1921, would-be assassins rushed into his house while he hid in the garden with his daughter, Yukika. The father of one of these dangerous young men later approached Ozaki to apologize in person for the actions of his son. Ozaki immediately responded by with a 32-syllable tanka poem, which he handed to the surprised man:

If it was patriotism that drove the young man,
My would-be assassin deserves honor for it.[11]

He was especially active in the struggle for universal manhood suffrage, which was established in 1925. During the 1930s, as an independent politician, he criticised the growing influence of the Japanese military and advocated the vote for women. He was imprisoned during both world wars. Hailed as a political hero after World War II, he was involved in anti-war and pro-democratic activities until his death.

As the second elected Mayor of Tokyo after its administration was separated from the surround prefecture, he found himself in an arduous and sometimes disagreeable job—but his determination to make the city better produced noticeable results. Initial infrastructure projects which demanded his attention were wide-ranging: improving water supply and sewage, developing street surfacing, expanding streetcar service, and overseeing gas company mergers.[12] His mayoral position also provided the more ambiguous range opportunities which attended entertaining foreign dignitaries like US Secretary of State William Jennings Bryan and Britain's Field Marshal Lord Kitchener.[13]

The City of Tokyo presented cherry tree saplings to the City of Washington, D.C. in 1912.[14] The annual display of cherry blossoms on trees to be found in the West Potomac Park surrounding the Tidal Basin in the US capital city are the results of Ozaki's persistence in furthering this project during a time when he was mayor of Tokyo.[15] These flowering trees were the genesis of the continuing National Cherry Blossom Festival in Washington, D.C. and in other states as well. [1]

Ozaki's pen name was Ozaki Gakudo[16] until he reliquished it in 1946 in exchange for "So-tsuō" (meaning "grand old man of ninety"), simply because he had attained the age of ninety.[17] Starting in 1996, a yearly Gakudo Award has been "presented to individuals or organizations active in issues including the promotion of democracy, disarmament and human rights".[18]