The Seal of the Colombo Municipal Council 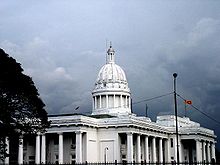 The Colombo Municipal Council is the local council for Colombo, the largest city and financial centre in Sri Lanka. The council was formed in 1865 and first met in 1866.[1] The municipal council is the oldest and the largest local government authority in Sri Lanka and, as of 2001, covers a resident population of over 600,000. It has 53 elected representatives and over 12,000 employees.[2]

Colombo is a charter city, with a Mayor Council form of government. Colombo's mayor and the council members are elected through local government elections held once in four years. For the past 50 years the city had been ruled by the United National Party (UNP), a right leaning party, whose business friendly policies resonate with the population of Colombo. However the UNP nomination list for the 2006 Municipal elections was rejected,[3] and an Independent Group supported by the UNP won the elections.[4] Uvais Mohamed Imitiyas was subsequently appointed Mayor of Colombo.[5]

Head of administration is the Municipal Commissioner, who handles day to day operations of the 16 departments that it is made up of.

The Municipal Council provides sewer, road management and waste management services, in case of water, electricity and telephone utility services the council liaises with the Water Supply and Drainage Board, the Ceylon Electricity Board and telephone service providers.