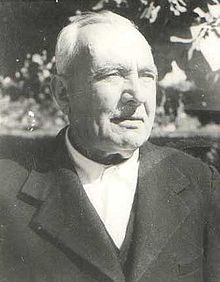 He was born in the village of Utmanzai, near Charsadda in the Khyber-Pakhtunkhwa. His father, Bahram Khan was a local landlord.

After matriculating from the Edwardes Mission High School in Peshawar, Khan Sahib studied at Grant Medical College, Bombay (present day Mumbai). He subsequently completed his training from St Thomas' Hospital in London. During the first World War he served in France and Medical Services]] and was posted in Mardan with the Guides regiment. He resigned his commission in 1921, after refusing to be posted in Waziristan, where the British Indian Army was launching operations against fellow Pakhtuns.

Contribution to the Indian independence movement

In 1935, Khan Sahib was elected along side Peer Shahenshah of Jungle Khel Kohat as representatives of the North-West Frontier Province to the Central Legislative Assembly in New Delhi.

With the grant of limited self-government and announcement of provincial elections in 1937, Dr. Khan Sahib led his party to a comprehensive victory. The Frontier National Congress, an affiliate of the Indian National Congress emerged as the single largest party in the Provincial Assembly.

At the time of independence, he was the chief minister. Later he was jailed by Abdul Qayyum Khan's government. After Qayyum Khan's appointment to the Central government and the personal efforts of the Chief Minister of Khyber-Pakhtunkhwa at the time, Sardar Bahadur Khan, he along with his brother and many other activists were released.

He joined the Central Cabinet of Muhammad Ali Bogra as Minister for Communications in 1954. This decision to join the government led to his split with his brother.[1]

In October 1955, he became the first Chief Minister of West Pakistan following the amalgamation of the provinces and princely states under the One Unit scheme. After differences with the ruling Muslim League over the issue of Joint versus Separate Electorates, he created the Republican Party.

He resigned in March 1957 after the provincial budget was rejected by the assembly.

In June, he was elected to the National Assembly representing the constituency of Quetta, the former capital of Balochistan.

He was assassinated by Atta Mohammad at approximately 8:30 am on May 9, 1958. "Allama Mashriqi Maliciously Implicated in Murder Case"

This tragic incident occurred while Dr. Khan Sahib was sitting in the garden of his son Sadullah Khan's house at 16 Aikman Road, GOR, Lahore. He was waiting for Colonel Syed Abid Hussein of Jhang to accompany him to a meeting organized in connection with the scheduled February 1959 General Elections.

The assailant, 30-year-old Atta Mohammad was a “Patwari” (Land Revenue Clerk) from Mianwali who had been dismissed from service two years previously. Dr. Khan Sahib was rushed to the Mayo Hospital. However the severe bleeding and grievous injuries caused by the multiple stab wounds meant that the doctors were unable to save his life.

The body of Dr. Khan Sahib was taken to his village Utmanzai in Charsadda about 30 miles from Peshawar, where he was laid to rest by side of his English wife May Khan. All West Pakistan Government offices remained closed on May 9 and flags flew at half-mast in memory of Dr. Khan Sahib. [2]

Speaking of his passing, Pakistani President Iskander Mirza said, about him that he was "the greatest Pathan of his times, a great leader and a gallant gentleman whose life-long fight in the cause of freedom, his sufferings and sacrifices for the sake of his convictions and his passion to do good to the common man were the attributes of a really great man." [3]

After his death, Nawab Akbar Khan Bugti was elected to fill the vacancy arising in the National Assembly.

It is important to note that Dr.Khan Sahib's brother, Ghaffar Khan and his Red Shirt movement stayed away from the electoral politics.

Ghaffar Khan actively opposed the One Unit and Dr. Khan Sahib's government. No major Red Shirt leader or worker ever joined the Republican Party, founded by Dr. Khan Sahib. The Red Shirts or Khudai Khidmatgar (servants of God) joined hands with nationalist and progressive workers and leaders from both the then East Pakistan and West Pakistan to form the National Awami Party (National Peoples Party) in 1957.

4.Obituary in British Journal of Medicine [1]