Logan's Run is a novel by William F. Nolan and George Clayton Johnson. Published in 1967, it depicts a dystopic ageist future society in which both population and the consumption of resources are maintained in equilibrium by requiring the death of everyone reaching a particular age. The story follows the actions of Logan, a Sandman charged with enforcing the rule, as he tracks down and kills citizens who "run" from society's lethal demand—only to end up "running" himself.

The introduction to the book states:

"The seeds of the Little War were planted in a restless summer during the mid-1960s, with sit-ins and student demonstrations as youth tested its strength. By the early 1970s over 75 percent of the people living on Earth were under 21 years of age. The population continued to climb—and with it the youth percentage.
In the 1980s the figure was 79.7 percent.
In the 1990s, 82.4 percent.
In the year 2000—critical mass." 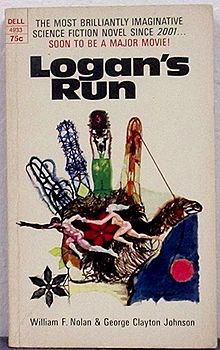 In the world of 2116, a person's maximum age is strictly legislated: twenty one years, to the day. When people reach this Lastday they report to a Sleepshop in which they are willingly executed. A person's age is revealed by their palm flower crystal embedded in the palm of their right hand that changes color every seven years, then turns black on Lastday.

Runners are those who refuse to report to a Sleepshop and attempt to avoid their fate by escaping to Sanctuary. Logan 3 is a Deep Sleep Operative (also called Sandman) whose job is to terminate Runners using a special weapon called the Gun, an unusual revolver which can fire a number of different projectiles. Runners are most terrified of one called the Homer which homes in on body heat and deliberately ignites every pain nerve in the body. Sandmen practice Omnite, a fictional hybrid martial arts style. On his own Lastday, Logan becomes a Runner himself in an attempt to infiltrate an apparent underground railroad for runners seeking Sanctuary—a place where they can live freely in defiance of society's dictates. For most of the book Logan is an antihero; however, his character develops a sympathy towards Runners and in the end he himself becomes a Runner.

Jessica 6, a contact Logan made after he chased her Runner brother Doyle 10 into Cathedral where he was killed by the vicious preteen "Cubs", helps him, despite her initial distrust of him. Francis, another Sandman and a friend of Logan, catches up with Logan and Jessica after they have managed to make it to the final staging area before Sanctuary. He reveals that he is actually the legendary Ballard, who has been helping arrange their escape. The 42-year-old Ballard is working from within the system; he believes that the computer that controls the global infrastructure, buried beneath Crazy Horse Mountain, is beginning to malfunction, and that the society will die with it.

Sanctuary turns out to be Argos, an abandoned space colony near Mars. Logan and Jessica escape to the colony on a rocket that departs from a former space program launch site in Florida. Ballard remains to help others escape. 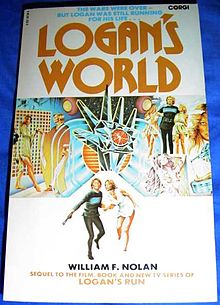 Nolan wrote two sequels, Logan's World and Logan's Search, published after the film's release. There is also a novelette, Logan's Return, that has been published as an e-book. Two other novels, Logan's Journey and Logan Falls, have been written, but not published.[1]

George Clayton Johnson has also been working, off and on, on his own sequel to the novel, reported at various times to be entitled either LastDay or Jessica's Run.[2] He is represented by WBMT Literary, Film and Television.[3]

The novel was adapted in 1976 as a film, directed by Michael Anderson and starring Michael York as Logan 5 (not 3), Jenny Agutter as Jessica 6, and Richard Jordan as Francis 7. The film only uses the basic premise from the novel (everyone must die at a specific age, Logan runs with Jessica as his companion while being chased by Francis). However, the world is post apocalyptic and people now live inside a huge domed city and are unaware of the world outside, believing it to be a barren, poisonous environment. The motivations of the characters are also quite different in the film. The age of death is 30, and instead of reporting to a Sleepshop, citizens must take part in a ritual called "Carrousel" in which they are vaporized with the promise of being "renewed". Logan is a 26 year old Sandman, sent by the computer to find and destroy Sanctuary. The computer alters his palm flower (here called a "life clock") to show him as approaching Lastday, and he becomes a runner and escapes from the city. Sanctuary turns out not to exist (or at least is never actually found), and the only other person that Logan and Jessica encounter outside the city is an old man (Peter Ustinov) who lives with a large number of cats in the Senate Chamber of the largely intact ruins of Washington, DC. Logan kills Francis, who is simply a Sandman in the movie and not a rebel leader, and leads the old man back to just outside the domed city, returning to try to lead a revolt against the culling. No one believes or listens to him or Jessica, and instead he is captured by Sandmen. In his interrogation by the computer, his honest information that there is no Sanctuary causes the computer to malfunction and self-destruct. As the young throngs leave the confines of the burning and exploding Domed City, they meet the Old Man outside - the first time they have seen anybody of that age.

In the mid-1990s, Warner Bros. began development of a remake of the movie.[4] In April 2000, director Skip Woods entered negotiations with the studio and producer Joel Silver to write and direct the remake.[5] The director planned to make it closer to the novel than the original film, restoring previously-removed elements including Crazy Horse Mountain and sky gypsies.[4]

In March 2004, director Bryan Singer was brought in to develop and direct Logan's Run. Singer had begun working with production designer Gy Dyas from his previous film X2. Screenwriters Ethan Gross and Paul Todisco were hired to write the script with the director, with the film being slated for a 2005 release.[6] In October, the director said he had begun previsualization of Logan's Run, which would be completed by the time he finished production of his project at the time, Superman Returns.[7] The following December, screenwriter Dan Harris said that he and the director had turned in a first draft for Logan's Run. Harris said that further development of the project would take place in Sydney after production for Superman Returns, for which he also collaborated, was finalized. The screenwriter said that the remake would contain more action than the original film, describing the premise to be "a remake of the concept of the movie plus the book".[8]

In February 2005, screenwriter Christopher McQuarrie was hired to rewrite the script, with filming to take place in Australia.[9] In February 2006, Logan's Run was scheduled to begin production in September/October 2006 in Vancouver.[10] The following May, Singer's availability to direct Logan's Run was questioned due to scheduling conflicts with filming the sequel to Superman Returns.[11] By May, Singer confirmed that he would not direct Logan's Run, seeking a vacation from the scheduled demands of his job.[12] Directors Robert Schwentke and James McTeigue were approached for the project, but neither ultimately signed on.[13]

In August 2006, production offices for Logan's Run were taken over by the production for the 2008 film Speed Racer.[14] In April 2007, producer Joel Silver reiterated his plan to remake the original film.[15] The following July, Silver said that since Singer's departure, no new director had come aboard the project.[16] In August 2007, the project was reinvigorated with Joseph Kosinski hired as the new director and a new script being written by screenwriter Timothy J. Sexton. Kosinski had made a presentation to Warner Bros. including graphic art and animated previsualization that illustrated his plan for the film, whose low budget appealed to the studio. Kosinski has since moved on to make Tron: Legacy.

In May and June 2010, commercial filmmaker and Ridley Scott protege Carl Erik Rinsch was hired to direct and screenwriter Alex Garland was brought on board to write the script.[17] Rinsch ultimately pulled out of the project due to scheduling conflicts.

As of August 2011, Danish filmmaker Nicolas Winding Refn was attached to direct the remake of Logan's Run with actor Ryan Gosling attached to star.[18] Refn and Gosling had recently worked together on the 2011 thriller Drive.

A television series spin-off from the film, starring Gregory Harrison as Logan 5 and Heather Menzies as Jessica 6, lasted one season of 14 episodes, from September 16, 1977 through January 16, 1978 on U.S. television (CBS-TV). D. C. Fontana served as story editor and employed several other writers from Star Trek as well as the original novel's authors. The series was produced by Rene Leyva.