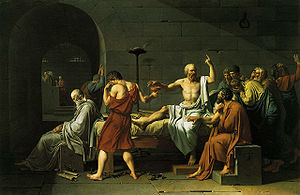 The Trial of Socrates refers to the trial and the subsequent execution of the classical Athenian philosopher Socrates in 399 BC. Socrates was tried on the basis of two notoriously ambiguous charges: corrupting the youth and impiety (in Greek, asebeia). More specifically, Socrates’ accusers cited two "impious" acts: "failing to acknowledge the gods that the city acknowledges" and "introducing new deities." A majority of the 501 dikasts (Athenian citizens chosen by lot to serve as jurors) voted to convict him. Consistent with common practice, the dikasts determined Socrates’ punishment with another vote. Socrates was ultimately sentenced to death by drinking a hemlock-based liquid. Primary sources for accounts of the trial are given by two of Socrates’ students, Plato and Xenophon; well known later interpretations include those of the journalist I.F. Stone and the classics scholar Robin Waterfield.[1] The trial is one of the most famous of all time.

Socrates was a well-known figure in Athens for many years prior to his trial. Aristophanes’ comedy Clouds, produced in 423 BC, portrays Socrates as a sophist. In the play, Socrates teaches young Pheidippides how to formulate arguments to justify beating his own father. Though Socrates denied any affiliation with the sophists, Clouds suggests that Athenians associated him with the sophistic movement. The sophists were a group of mixed reputation in Athens. G.B. Kerferd provides an example of one widespread modern view of the sophists: “…they were a set of charlatans that appeared in Greece in the fifth century, and earned ample livelihood by imposing on public credulity: professing to teach virtue, they really taught the art of fallacious discourse, and meanwhile propagated immoral practical doctrines.”[2]

Clouds is not the only Aristophanes comedy which portrays conflict between an older man and his younger counterpart. Aristophanes’ comedy Wasps (422 BC) also contains disagreement between older men and younger men. This, as Robin Waterfield argues, represents the social conflict between two generations of men in Athens, especially in the decade from 425 to 415 BC. He also suggests that the divide between those in favor of the Athenian invasion of Sicily and those opposed was largely a generational divide.[3] Socrates, along with the sophists, was blamed in part by a significant segment of the citizenry for instilling the younger generation with what the older generation perceived as a morally nihilistic, disrespectful attitude.

No works by Socrates himself survive, but his pupil Plato composed numerous 'Socratic dialogues', with his teacher as the main character. Socrates's elenctic examination was resented by influential figures of his day, whose reputations for wisdom and virtue were debunked by his questions.[4] Socrates himself famously calls attention to his fellow citizens' annoyance at his elenchos by describing himself as the "gadfly" of Athens.[5] Socrates' elenctic method was often imitated by the young men of Athens.[6]

Another possible source of resentment were the political views that he and his followers were thought to have embraced. Critias, who appears in two of Plato's Socratic dialogues, was a leader of the Thirty Tyrants (the ruthless oligarchic regime that ruled Athens for eight months in 404-403 BC), but there is also a record of their falling out.[7]

As with many of the issues surrounding Socrates’ conviction, the nature of his affiliation with the Thirty Tyrants is far from straightforward. During the reign of the Thirty, many prominent Athenians who were opposed to the new government left Athens. Robin Waterfield asserts that “Socrates would have been welcome in oligarchic Thebes, where he had close associates among the Pythagoreans who flourished there, and which had already taken in other exiles.”[3]:183 Given the availability of a hospitable host outside of Athens, Socrates, at least in a limited way, chose to remain in Athens. Thus, Waterfield suggests, Socrates’ contemporaries probably thought his remaining in Athens, even without participating in the Thirty’s bloodthirsty schemes, demonstrated his sympathy for the Thirty’s cause, not neutrality towards it. This is proved, Waterfield argues, by the fact that after the Thirty were no longer in power, anyone who had remained in Athens during their rule was encouraged to move to Eleusis, the new home of the expatriate Thirty.[3] Socrates did oppose the will of the Thirty on a few specific occasions. Plato’s Apology has the character of Socrates describe one such instance. He claims that the Thirty ordered him, along with four other men, to fetch a man named Leon from Salamis so that the Thirty could execute him. Socrates simply did not answer this order, while the other four men did go to Salamis to get Leon.[8]

Alcibiades, a controversial figure in Athens, was Socrates’ messmate during the siege of Potidaea (433-429 BC). Socrates remained Alcibiades’ close friend and mentor, and perhaps even his lover, for about five or six years.[3] Known for his flamboyant and audacious behavior, Alcibiades had a volatile relationship with the city of Athens. During his career, Alcibiades famously defected to Sparta after being accused in the defamation of the Mysteries, regained his political prominence in Athens, and was eventually driven out of Athens yet again. Some contempt for Socrates may have stemmed from his relationship with Alcibiades.[citation needed]

Moreover, according to the portraits left by some of Socrates' followers, Socrates himself seems to have openly espoused certain anti-democratic views, most prominent perhaps being the view that it is not majority opinion that yields correct policy but rather genuine knowledge and professional competence, which is possessed by only a few.[9] Plato also portrays him as being severely critical of the most prominent and well-respected leaders of the Athenian democracy;[10] and even has him claim that the officials selected by the Athenian system of governance cannot credibly be regarded as benefactors, since it is not any group of many that benefits, but only "some one person or very few".[11] Finally, Socrates was known as often praising the laws of the undemocratic regimes of Sparta and Crete.[12]

Apart from his views on politics, Socrates held unusual views on religion. He made several references to his personal spirit, or daimonion, although he explicitly claimed that it never urged him on, but only warned him against various prospective events. Many of his contemporaries were suspicious of Socrates's daimonion as a rejection of the state religion. It is generally understood[citation needed] that Socrates's daimonion is akin to intuition. Moreover, Socrates claimed that the concept of goodness, instead of being determined by what the gods wanted, actually precedes the entire business of deities.

The first Tetralogy of dialogues by Plato, Socrates' student, has the trial and execution of Socrates as central theme: Euthyphro, Apology, Crito and Phaedo. Also Xenophon wrote the Apology of Socrates to the jury.

An Athenian rhetoric expert, Polycrates, also wrote a pamphlet called the Prosecution of Socrates in 392 BC. Although the contents of the pamphlet itself do not survive, we do have written replies to it by Xenophon and Libanius of Antioch. The pamphlet was supposedly a record of the prosecution speech made by Anytus, one of Socrates’ formal accusers. Polycrates’ account has Anytus condemning Socrates for activity prior to 403 BC, which would be in violation of general amnesty granted by the reconciliation agreement of 403/402 BC. The reconciliation agreement of 403/402 BC certainly grants some form of amnesty for actions taken before or during the rule of the Thirty. However, the scope of the amnesty is unclear. Waterfield,[3] among others, contends that the scope of the amnesty was quite limited, while many other scholars consider the amnesty comprehensive. For instance, Thomas R. Martin describes the amnesty as “general…under which all further charges and official recriminations concerning the [reign of] terror were forbidden.”[13] If the amnesty included all activity before 403 BC, it seems that we cannot trust Polycrates’ account. If the amnesty was actually more restricted, Polycrates’ account (or what we can glean from other sources discussing it) seems to be a more credible source.

The second element of the trial was a formal accusation, which the accuser Meletus swore before the Archon, a state office-holder with primarily religious duties. Having decided that there was a case to answer, the Archon summoned Socrates to appear before a jury of Athenian citizens, to answer charges of corrupting the youth of Athens and impiety.

Athenian juries were drawn by lottery from a group of male citizen volunteers. Unlike trials in many modern societies, majority verdicts were the rule rather than the exception. (For a satirical account of juries and the sort of people found on them, read Aristophanes' comedy The Wasps.)

Neither Plato nor Xenophon mentions the number of Socrates' judges, though Plato's Apology 35a-b does suggest some definite boundaries: that if just thirty of the votes had been otherwise then he would have been acquitted (35a), and that (perhaps) less than three fifths voted against him (35b).[14]

After the vote on Socrates' guilt, Socrates and his prosecutor suggested alternative sentences. Socrates, after expressing his surprise of the little amount he needed to be have been found innocent, jokingly suggested free meals at the Prytaneum, a particular honor held for city benefactors and winners at the Olympic Games, then offered to pay a fine of 100 drachmae, which was a fifth of his property and a testament to Socrates' poverty. Finally he settled on the sum of 3000 drachmae, put forward by Plato, Crito, Critobulus, and Apollodorus, who guaranteed the payment. His prosecutor proposed the death penalty.

The jury voted for death as the penalty - the larger majority showing (Diogenes Laertius 2.42). Perhaps Socrates had lost support by his slighting and unapologetic tone.

Socrates's followers encouraged him to flee (see: Crito), and citizens expected him to do so and were probably not averse to it; but he refused on principle. Apparently in accordance with his philosophy of obedience to law, he carried out his own execution, by drinking the hemlock provided to him. Socrates died at the age of 70. (See: Phaedo).

Most scholars see the conviction and execution of Socrates as a deliberate choice made by the famous philosopher himself. If the accounts of Plato and Xenophon are reasonably accurate, Socrates sought not to persuade jurors, but rather to lecture and provoke them.

The trial and execution of Socrates produced the first martyr for free speech. As I. F. Stone observed, just as Jesus needed the cross to fulfill his mission, Socrates needed his hemlock to fulfill his.[15]

Athens had just come through a difficult period, where a Spartan-supported group, called the Thirty Tyrants had overturned the city's participatory democracy and sought to impose oligarchic rule. The fact that Critias, the leader of the Tyrants, was one of Socrates's pupils was not seen as a coincidence.

His friends tried to make excuses, but the view of the Athenians was probably that expressed by the orator Aeschines some years later, when, in a prosecution speech, he wrote: "Did you not put to death Socrates the sophist, fellow citizens, because he was shown to have been the teacher of Critias, one of the Thirty who overthrew the democracy?"

The death of Socrates, as presented by Plato, has inspired writers, artists and philosophers in the modern world, in a variety of ways.

For some, the execution of the man Plato called 'the wisest and most just of all men' has shown the unreliability or undesirability of democratic rule. For others, the Athenians' action was a justifiable defense of their recently re-established democracy.[16]

I. F. Stone, an American journalist, wrote a book entitled "Trial of Socrates" after his retirement, arguing that Socrates wanted to be sentenced to death in order to justify his opposition to the Athenian democracy, and that Socrates felt that old age would be unpleasant anyway.

Waterfield, too, argues that Socrates’ death was a voluntary action motivated by a greater purpose. In Waterfield’s version, Socrates “saw himself as healing the city’s ills by his voluntary death.”[3]:204 He argues that Socrates, with his unconventional methods, attempted to resolve the political confusion in Athens. Therefore, he was willing to serve as a “scapegoat,” so that Athens could set aside old disputes and move forward in a new, more harmonious direction.[3]