William Morgan (1774–1826?) was a resident of Batavia, New York, whose disappearance and presumed murder in 1826 ignited a powerful movement against the Freemasons, a secret fraternal society that had become influential in the United States. After Morgan announced his intention to publish a book exposing Freemasonry's "secrets", he was arrested, kidnapped by Masons, and believed murdered.

The events sparked a public outcry and inspired Thurlow Weed, a New York politician, to muster discontent and form the new Anti-Masonic Party, which was also opposed to President Andrew Jackson. It ran a presidential candidate in 1828, but by 1835, was nearly defunct.[1]

Morgan was born in Culpeper, Virginia, in 1774. His birthdate is sometimes listed as August 7, but no source for this is given. He was apprenticed as a bricklayer[2] or stone cutter.

Morgan claimed to have served with distinction as a captain during the War of 1812, though there is no evidence that he did so. Several men named William Morgan appear in the Virginia militia rolls, but none held the rank of captain.

In October 1819, when he was in his mid 40s, Morgan married 16-year old Lucinda Pendleton in Richmond, Virginia. They had two children: Lucinda Wesley Morgan and Thomas Jefferson Morgan.[3] Two years after his marriage, Morgan moved his family for unknown reasons to York, Upper Canada, where he operated a brewery. When his business was destroyed in a fire, Morgan was reduced to poverty.

He returned with his family to the United States, settling first at Rochester, New York, and later in Batavia, where he worked in stone quarries. Nineteenth-century local histories described Morgan as a heavy drinker and a gambler.[4]

Morgan attempted to join the Masonic lodge in Batavia but was denied admission.[5] Angered by the rejection, Morgan said he was going to publish a book entitled Illustrations of Masonry,[6] critical of the Freemasons and describing their secret degree work in great detail.

He said that a local newspaper publisher, David Cade Miller, had given him a sizable advance for the work. Miller is said to have received the entered apprentice degree (the first degree of Freemasonry), but had been stopped from advancement by the objection of one or more of the Batavia lodge members.[4] This may have inspired him to support Morgan's work. Morgan had entered into a $500,000 penal bond with three men: Miller, John Davids (Morgan's landlord) and Russel Dyer.[5]

Some members of the Batavia lodge published an advertisement denouncing Morgan. Unknown individuals were reported to have tried to set fire to Miller's newspaper office.[5] A group of Masons gathered at Morgan's house claiming that he owed them money. On 11 September 1826, Morgan was arrested; according to the law, he could be held in debtor's prison until the debt was paid. Learning of this, Miller went to the jail to pay the debt and finally secured Morgan's release.

A few hours later, Morgan was arrested, for a loan which a creditor claimed he had not paid, and for supposedly stealing clothing. He was jailed in Canandaigua. On the night of 11 September, a man claiming to be a friend paid Morgan's debt at the jail, securing his release. The two men went to a waiting carriage, which arrived the next day at Fort Niagara.[4]

Several accounts have conflicts about what followed. The most common version is that Morgan was taken in a boat to the middle of the Niagara River and drowned, as he was never seen again.[7] In 1848 Henry L. Valance allegedly confessed to his part in the murder in a deathbed confession, recounted in chapter two of Reverend C. G. Finney's book The Character, Claims, and Practical Workings of Freemasonry (18xx).[8] In October 1827, a badly decomposed body washed up on the shores of Lake Ontario. Many presumed it to be Morgan, and the remains were buried under that identification. But the clothing was positively identified as that of Timothy Monroe, a missing Canadian, by his widow.[9][10] Freemasons deny that Morgan was killed, saying that he was paid $500 to leave the country. Contemporary reports included sighting of Morgan in other countries, but none have been confirmed. Three Masons, Loton Lawon, Nicholas Chesebro and Edward Sawyer, were charged with, convicted and served sentences for the kidnapping of Morgan.[11]

Soon after Morgan disappeared, Miller published his book, which became a bestseller because of the notoriety of the events. Miller did not say that Morgan had been murdered but "carried away". Accounts circulated of Morgan's having assumed a new identity and settled in Albany, in Canada, or the Cayman Islands, where he was said to have been hanged as a pirate. New York governor DeWitt Clinton, also a Mason, offered a $1,000 reward for information about Morgan's whereabouts, but it was never claimed.[10]

The circumstances of Morgan's disappearance and the minimal punishment received by his kidnappers caused public outrage. He became a symbol of the rights of free speech and free press. Protests against Freemasons took place in New York and the neighboring states. Masonic officials disavowed the actions of the kidnappers, but all Masons came under a cloud. Thurlow Weed, a New York politician, formed an anti-Masonic movement, gathering discontented opponents of President Andrew Jackson, known to be a Mason, into the Anti-Masonic political party. It ran a candidate for the presidency in 1828 and gained the support of such notable politicians as William H. Seward.

On that campaign, other Jackson rivals, including John Quincy Adams, joined in denouncing the Masons. In 1832, the Anti-Masonic Party fielded William Wirt as its presidential candidate, but he received only seven electoral votes. By 1835, the party had become moribund everywhere but Pennsylvania, as other issues, such as slavery, became the focus of national attention. In 1847 Adams published a widely distributed book titled Letters on the Masonic Institution, that criticized the Masons' secret society.

In 1830 Morgan's widow Lucinda Pendleton Morgan married George W. Harris of Batavia, a silversmith who was 20 years older. After they moved to the Midwest, they became Mormons. By 1837, some historians believe that Pendleton Morgan Harris had become one of the plural wives of Joseph Smith, Jr., founder of the Latter Day Saint movement.[12] She continued to live with her older husband, George Harris. After Smith was murdered in 1844, she was "sealed" to him for eternity in a rite of the church.[3]

Members of Freemasonry criticized the Mormons for their alleged adoption of Masonic rituals and regalia. In 1841 the Mormons announced their official baptism of William Morgan after his death as one of the first under their new rite to take people into eternal the Church of Jesus Christ of Latter-day Saints.[3]

By 1850 the Harrises had separated. When George Harris died in 1860, he had been excommunicated from the Mormons after ceasing to practice with them. That year Lucinda Morgan Harris was reported to have joined the Catholic Sisters of Charity in Memphis, Tennessee, where she worked at the Leah Asylum. She had been widowed three times.[3]

In June 1881 in Pembroke, New York, a grave was discovered in a quarry two miles south of the Indian reservation. In it was a metal box containing a crumpled paper; its few legible words were interpreted to suggest that the remains might have been Morgan's.[10] 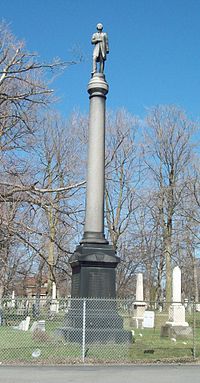 On 13 September 1882, the National Christian Association, a group opposed to secret societies, commissioned and erected a statue in memoriam to Morgan in the Batavia Cemetery. The ceremony was witnessed by 1,000 people, including representatives from local Masonic lodges.[13][14]

Sacred to the memory of Wm. Morgan, a native of Virginia, a Capt. in the War of 1812, a respectable citizen of Batavia, and a martyr to the freedom of writing, printing and speaking the truth. He was abducted from near this spot in the year 1826, by Freemasons and murdered for revealing the secrets of their order. The court records of Genesee County and the files of the Batavia Advocate, kept in the Recorders office contain the history of the events that caused the erection of this monument.

Representation in other media

The pharmacist John Uri Lloyd based part of the background story of his popular scientific allegorical novel Etidorhpa (1895), on the kidnapping of William Morgan and the start of the Anti-Masonry movement. In the novel, the speaker is kidnapped by members of a secret society, because he and a publication are suspected to threaten the society's secrecy. Identifying as "I-Am-The-Man," he is taken to a cave in Kentucky. He is led on a long, subterranean journey, an inner journey of the spirit as well as a physical one.

In his novel The Craft: Freemasons, Secret Agents, and William Morgan (2010), the author Thomas Talbot presents a fictional version of the William Morgan kidnapping. He portrays him as a British spy, includes rogue British Masons, and has presidential agents thwart an assassination plot.