The highways were originally designated using a two-tier system, national (SH 1-8) and provincial, with national highways having a higher standard and funding priorities. Now all are state highways, and the network consists of SH 1 running the length of both islands, SH 2-5 and 10-58 in the North Island, and SH 6-8 and 60-99 in the South Island, numbered approximately north to south. State highways are marked by red shield-shaped signs with white numbering (shields for the former provincial highways were blue). Road maps usually number state highways in this fashion.

Only two percent of the network is composed of dual-carriageway motorways with grade-separated access but they carry ten percent of all traffic.[1] The majority of the State Highway network is made up of single-carriageway roads with one lane each way and at-grade access.

In the early days all roads were managed by local roads boards. The idea of a national network of highways did not emerge until the early twentieth century, when a series of pieces of legislation was passed to allow for the designation of main highways (in 1922) and state highways (in 1936). This saw the National Roads Board, an arm of the Ministry of Works, responsible for the state highway network.

From 1989 to 2008, state highways were the responsibility of Transit New Zealand, a Crown entity. In 1996 the funding of the network was removed from the operational functions with the creation of Transfund New Zealand, which then merged with the Land Transport Safety Authority to create Land Transport New Zealand. That was done to ensure that funding of state highways was considered on a similar basis to funding for local roads and regional council subsidised public transport. In August 2008, Transit and Land Transport NZ merged to become the NZ Transport Agency.

Every five years the NZ Transport Agency will embark on a state highway review to consider whether the existing network should be expanded or reduced, according to traffic flows, changes in industry, tourism and development. Highways around Tauranga and in the Napier/Hastings region have undergone major changes in recent years.

In this way, travellers can accurately assess their location, and road authorities can identify each bridge uniquely.

Sometimes, houses with RAPID numbering can also be used to determine the position. For example, house number 1530 is 15.3 km from the start of the highway.

From 2006 information, the busiest stretch of SH 1 was just south of the Auckland Central Motorway Junction, on/near the Newmarket Viaduct, with over 200,000 vehicles (either way) each day. The least busy parts of the network (excluding off-ramps and on-ramps) are on SH 43 north-east of Whangamomona, with fewer than 120 vehicles (counting both directions) in a day.[2] Some of the lesser trafficked highways still include unsealed sections.

In early 2008, Transit New Zealand (now the NZ Transport Agency) unveiled KiwiRAP (the New Zealand Road Assessment Programme) in cooperation with other government agencies and the New Zealand Automobile Association. The system, based on similar programs overseas, categorises New Zealand state highways according to the safety of discrete 'links' (sections of the network, with a total of 10,856 km of highways separated into 172 links ranging in length from 2.4 km to 318 km). These are graded according to their 'individual risk' and their 'collective risk' based on historical crash data and traffic volumes.[3]

Both categories of assessment are to be used as an advisory tool for both drivers to inform them of dangerous road sections as well as to allow Traffic Controlling Authorities to prioritise maintenance and safety improvements. 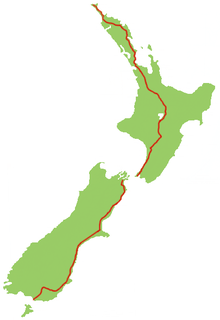 State Highway 1 can be considered as a single highway running the length of both main islands, broken in the middle by the ferry connection at Cook Strait. It connects the five largest urban areas and includes the country's busiest stretch of road.

Many sections of State Highway provided by the NZ Transport Agency are marketed as tourist highways, sometimes jointly with local roading providers. Transit maintains traffic signs on and near State Highways to help promote these routes.[4] These include: