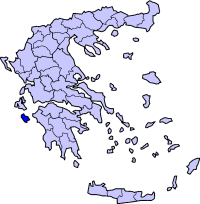 Zakynthos (Greek: Ζάκυνθος(Audio-IPA|Ell-Zakynthos.ogg| [ˈzacinθos] ), sometimes called Zante in English; in Italian Zacinto or Zante), the third largest of the , covers an area of convert|410|km2|sqmi|0|abbr=on and its coastline is roughly convert|123|km|mi|0|abbr=on in length. The island is named after Zakynthos, the son of a legendary Arcadian chief . The name, like all similar names ending in -nthos, is pre-Mycenaean or in origin. Zakynthos has a thriving tourism industry.

The mild, climate and the plentiful winter rainfall endow the island with dense vegetation. The principal products are , currants, s and fruit.

The capital, which has the same name as the prefecture, is the town of Zakynthos; apart from the official name, it is also called "Chora" (i.e. the Town, a common denomination in Greece when the name of the island itself is the same as the name of the principal town). According to the 2001 census, the island has a population of 38,957.

Among the most famous Zakynthians is the 19th century poet , the principal modern Greek and author of the of Greece. His statue adorns the main town square. Also the explorer (Ioannis Focas) and the Italian poet were born here.

The island has one airport, the (on former GR-35) in its southwest which connects flights with other Greek airports. Further southwest is the National where loggerhead turtles ("") are found in the . "Caretta caretta" is an - especially by the deck chairs laid out on their breeding grounds and the inevitable pollution. Every year at the beginning of June, the female turtles come to the southern beaches in order to bury their eggs in the sand. The incubation period for the nest is approximately fifty five days, after which time hatchlings emerge from the nest and make their way to the sea. The survival rate for hatchlings is very small, and it is estimated that only one in one thousand hatchlings that enter the sea live to adulthood. Each nest contains around one hundred to one hundred and twenty eggs, each of which are around the size and shape of a ping-pong ball. Female turtles begin to lay nests at around twenty to thirty years of age.

The port of Zakynthos has a ferry connecting to the port of Kyllini on the mainland. Another ferry connects the village of Skinari to on the island of .

The , a small sweet seedless is native to the island.

Sites of interest include Shipwreck Bay, Cape and the Blue Caves. The western part of the island is accessible and has a panoramic view of the sea. The ridge area from Anafontria has an observation deck which overlooks the shipwreck and there is a monastery nearby.

Keri is located in the far south of the island. It is a mountain village and has a lighthouse in the south. It includes a panorama of the southern part of the .

For tourist facilities, Zante has campsites and beaches including, a beautiful strech near Keri, around 100 m in length and surrounded by cliffs. The island also offers a plethora of arches and cliffs which are widely known beyond the island ; One is underground. Several documentaries have been filmed around this area of Zakynthos/Zante. Beaches are to be found in Porto Limnionas, Porto Vromi and Porto Zoro.

Zakynthos was inhabited from the , as some excavations have proved.

The famous ancient Greek poet and writer, , first mentioned the island in his masterpieces, the and the , stating that the first inhabitants of it were the son of King Dardanos of Troy called Zakynthos and his men and that they first came on the island around 1500-1600 BC.

The island was then conquered by the Great Imperial King Arkeisios of Kefalonia. The famous Ulysses ("" in Greek) from was the next King to conquer the island.

Later on, a treaty was signed that made Zakynthos an independent democracy, the first established in the Hellenic area, and that lasted more than 650 years.

Zakynthos, along with the rest of the Ionian islands, spent centuries as a subject of the and other Italian principalities. Italian rule protected the island from Ottoman domination but in its place it put a feudal oligarchy. The cultural influence of Italy (and of Italian on local dialect) was considerable. The wealthy made a habit of sending their sons to Italy to be educated. A good example is , a native of Zakynthos and Greece's national poet. However, both the Greek language and Orthodox faith survived intact. During the Napoleonic wars the islands were occupied at different times by France, as part of the département (which induced the peasants to revolt), Russia, Turkey () and finally Britain, which held on to them under the guise of the until 1864, when they were ceded to Greece to stabilize the rule of the newly crowned Danish-born King of Greece, Georgios I.

The Great Earthquake of 1953

This "paradise on earth" suffered a series of four severe s in August 1953, resulting in the total destruction of the island's infrastructure, including most of its state archives. The third and most destructive of those quakes, registering 7.3 on the Richter Scale, occurred at 09:24 UTC (11:24 am local time) on , . It had its epicentre directly on the southern tip of the nearby island of and caused widespread destruction there as well. In addition, the quake was felt throughout most of the country. Only three buildings on Zakynthos were left standing after the disaster: the St. Dionysios Cathedral, the National Bank building and the church of St. Nicholas "tou Molou" (of the Quay). A few other buildings in outlying areas managed to avoid complete collapse. The first relief efforts came from the British Royal Navy and the state of ; during 's occupation of the island, the island's Bishop Chrysostomos gave the Germans a list of Jews on the island. It was a list of two names; his own and the mayor's. Israel's relief came with a message that read "The Jews of Zakynthos have never forgotten their Mayor and their beloved Bishop and what they did for us."

After the enormous earthquake, the island's roads were expanded and paved along with the GR-35, one of the roads linking with the town and along with , Keri and Volimes and from Lachans to Keri. Its airport was opened in the 1960s. Its population partly emigrated but subsequently boomed in later years.

is also common on the island. A small mountain located in Zakynthos' west side was mined during the 1990s, though it is no longer in use. Today, mining continues, but with two quarries on the mountain range on the western part of the island. Tourism continues to thrive and Zakynthos is currently one of the most popular tourist destinations in .

A few earthquakes rumbled later in the , one on Sunday , at 6.4 R, felt without any damages or injuries. Another but less trembling four months later occurred on Saturday and measured at 4 R also nearly causing no damages.

Starting in the early morning hours of , , a series of moderate to strong earthquakes occurring on an almost daily basis began shaking almost the entire island. On , however, the phenomenon intensified in both magnitude and rate of events. At 03:02 local time of that day, a powerful, magnitude 5.7 earthquake hit the area, only to be followed by an even stronger tremor, registering at 5.9 on the Richter Scale, at 8:30 p.m. (20:30) EET. On , a committee of the nation's most prominent seismologists had an emergency meeting with the Greek , in order to assess the emerging situation. The meeting ended in a scientific consensus that this specific area of the Ionian Sea was simply not ready to produce an even stronger quake, advising the nervous citizens of the island to remain calm. However, at 19:52 and at 19:56 local time of that same evening, two more earthquakes shook the region sending scores of terrified people into the streets. The earthquakes had a preliminary moment magnitude of 5.8 and 5.4 respectively. Seismologists at the were once again taken by surprise by what turned into an unprecedented riddle concerning whether or not these were in fact foreshocks of a major event. The chances are, nonetheless, that this was just a phenomenon known as , characterized by a pattern of a considerable amount of magnitude-wise similar tremors, all occurring within a limited number of days or weeks. As a result of the recurring jolts, moderate damage was reported to a total of sixty residencies and one library, while a small crack appeared on the eastern part of the capital's port. In addition, several rocks tumbled down onto one of the island's main roads, running through its mountainous areas.

The Ionian Islands are situated upon one of Europe's most notorious , capable of producing earthquakes potentially causing both widespread damage and considerable loss of life. However it should be stressed that, following the catastrophe of 1953, the authorities of Zakynthos have enforced a strict program of antiseismic standards to be applied in every building to be constructed. All buildings have been built on a swimming slab and enforced with steel, determined by the government to ensure safety. As a result, an earthquake similar to that of , , will almost certainly result in far less destruction.

After the quake and the Wildfires of 2006

On Thursday , , the western portion of the island was hit by a forest fire. The fire spread to the island's forest and ended up spreading by hectares. Firefighters along with helicopters and planes from the mainland arrived to fight the fire's expansion and further deforestation. The fire lasted for several days and on , much of the area was contained; though it had become unpopular and unattractive scenery. One of the conflagrations appeared as a fiery line visible from as far away as the southern portion of the island and the Ionian Sea.

The island offers exceptional attractions for divers. Many of the dive sites are cave dives around the island ; a wide range of marine life can be found, and common amongst it are moray eels, monk seals, octopus, and loggerhead turtles (caretta caretta).