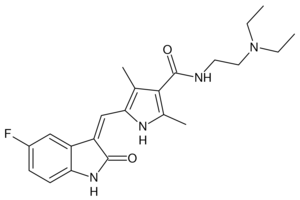 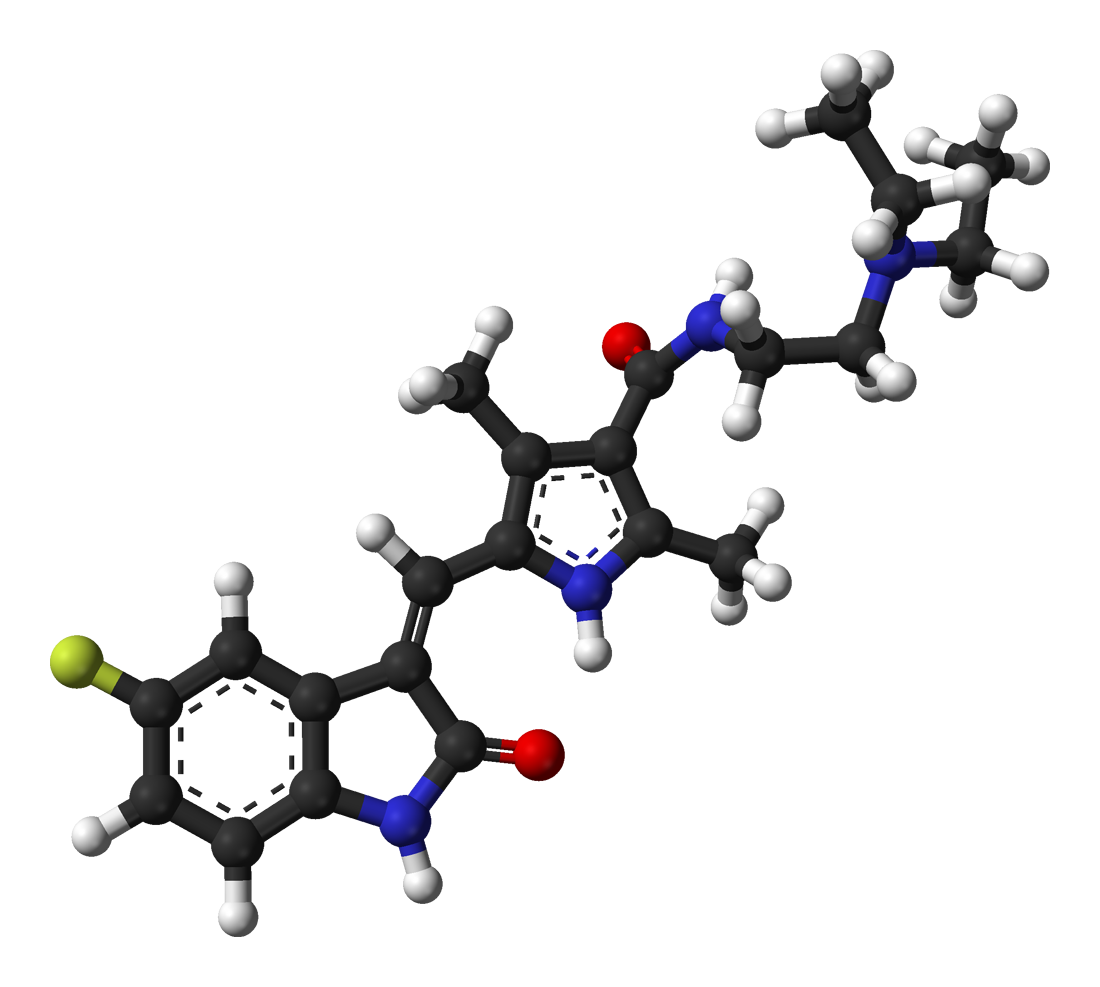 Sunitinib (marketed as Sutent, and previously known as SU11248) is an oral, small-molecule, multi-targeted (RTK) inhibitor that was approved by the FDA for the treatment of (RCC) and -resistant (GIST) on January 26, 2006. Sunitinib was the first cancer drug simultaneously approved for two different indications.

Sunitinib inhibits cellular signaling by targeting multiple RTKs. These include all receptors (PDGF-R) and receptors (VEGF-R), which play a role in both tumor and tumor cell proliferation. The simultaneous inhibition of these targets therefore leads to both reduced tumor vascularization and cancer cell death, and ultimately tumor shrinkage. Sunitinib also inhibits KIT (), the RTK that drives the majority of GISTs. In addition, sunitinib inhibits other RTKs including RET, CSF-1R, and flt3.

Sunitinib has become the new standard of care in the first-line treatment of metastatic RCC.

RCC is generally resistant to chemotherapy or radiation. Prior to RTKs, metastatic disease could only be treated with the cytokines interferon alpha (IFNα) or (IL-2). However, these agents demonstrated low rates of efficacy (5%-20%) and are associated with severe infusion-related adverse events.

In two separate Phase II studies, sunitinib demonstrated consistent response rates of approximately 40% in patients who had already failed cytokine therapy. Although these were Phase II studies, these results were impressive enough for the FDA to approve sunitinib for first-line use even before Phase III data were available.

The results of the Phase III study, published in the "" in 2007, proved that sunitinib offers superior efficacy compared with IFNα. Progression-free survival (primary endpoint) was more than doubled: 11 months for sunitinib compared with 5 months for IFNα ("P"<.000001). The benefit for sunitinib was significant across all major patient subgroups, including those with a poor prognosis at baseline.

Secondary endpoints also favored sunitinib. 28% of sunitinib patients had significant tumor shrinkage (objective response) compared with only 5% of patients who received IFNα ("P"<.001). Although overall survival data are not yet mature, there is a clear trend toward improved survival with sunitinib. Patients receiving sunitinib also reported a significantly better quality of life than those treated with IFNα ("P"<.001).

Based on these results, lead investigator Dr. Robert Motzer announced at ASCO 2006 that "“Sunitinib is the new reference standard for the first-line treatment of mRCC.”"

Sunitinib was associated with a clear advantage in overall survival.
* Median OS was 26 months with sunitinib vs 22 months for IFNα regardless of stratification ("P"-value ranges from .051 to .0132, depending on statistical analysis).
* The first analysis includes 25 patients initially randomized to IFNαwho crossed over to sunitinib therapy, which may have confounded the results; in an exploratory analysis that excluded these patients, the difference is becomes even more robust: 26 vs 20 months, "P"=.0081.
* Patients in the study were allowed to receive other therapies once they had progressed on their study treatment. For a “pure” analysis of the difference between the two agents, an analysis was done using only patients who did not receive any post-study treatment. This analysis demonstrated the greatest advantage for sunitinib: 28 months vs 14 months for IFNα, "P"=.0033.

This was the largest comparative trial in RCC to date, and sunitinib is the first agent to demonstrate an overall survival longer than 2 years in these patients. Dr. Figlin concluded his presentation by reinforcing that "“Sunitinib is the reference standard for the first-line treatment of mRCC.”"

Like RCC, GIST does not generally respond to standard chemotherapy or radiation. was the first cancer agent proven effective for metastatic GIST and represented a major development in the treatment of this rare but challenging disease. However, approximately 20% of patients do not respond to imatinib (early or primary resistance), and among those who do respond initially, 50% develop secondary imatinib resistance and disease progression within 2 years. Prior to sunitinib, patients had no therapeutic option once they became resistant to imatinib.

Sunitinib offers patients with imatinib-resistant GIST a new treatment option to stop further disease progression and, in some cases, even reverse it. This was proven in a large, Phase III clinical trial in which patients who failed imatinib therapy (due to primary resistance, secondary resistance, or intolerance) were treated in a randomized and blinded fashion with either sunitinib or placebo.

The study was unblinded early, at the very first interim analysis, due to the clearly emerging benefit of sunitinib. At that time, patients receiving placebo were offered to switch over to sunitinib. In the primary endpoint of this study, median time to tumor progression (TTP) was more than 4-fold longer with sunitinib (27 weeks) compared with placebo (6 weeks, "P"<.0001). These are based on the assessments of an independent radiology lab assessment. The benefit of sunitinib remained statistically significant when stratified for a multitude of prespecified baseline factors, including:
* Prior dose of imatinib
* Prior duration of imatinib therapy
* ECOG Performance status
* Age
* Weight
* Race
* Pain score
* Time since initial diagnosis
* Study location
* ITT vs PP analysis
* Investigator vs independent radiology lab assessment

Among the secondary endpoints, the difference in PFS was similar to that in TTP (24 weeks vs 6 weeks, "P"<.0001). 7% of sunitinib patients had significant tumor shrinkage (objective response) compared with 0% of placebo patients ("P"=.006). Another 58% of sunitinib patients had disease stabilization vs. 48% of patients receiving placebo. The median time to response with sunitinib was 10.4 weeks. Sunitinib reduced the relative risk of disease progression or death by 67%, and the risk of death alone by 51%. The difference in survival benefit may be diluted by the fact that placebo patients crossed over to sunitinib upon disease progression, and most of these patients subsequently responded to sunitinib.

Fatigue is the adverse event most commonly associated with sunitinib therapy. In this study, 34% of sunitinib patients reported any grade of fatigue, compared with 22% for placebo. The incidence of grade 3 (severe) fatigue was similar between the two groups, and there was no grade 4 fatigue reported.

The efficacy of sunitinib is currently being evaluated in a broad range of solid tumors, including breast, lung, and colorectal cancers. Early studies have shown single-agent efficacy in a number of different areas.

An oral agent, sunitinib has been generally well tolerated. Adverse events were considered manageable and the incidence of serious adverse events low.

Most adverse events can be managed through supportive care, dose interruption, or dose reduction.

* [http://www.sutent.com Sutent.com] — Manufacturer's site
* [http://www.gistsupport.org/treatments/current-treatments/sutent.php GIST Support International] — An international organization for the support of GIST patients, families, and friends. Includes detailed information from some of the foremost experts on GIST, links to research, treatment options, and GIST registry.
* [http://kidneycancer.org/ Kidney Cancer Association] — An organization that educates physicians and patients about kidney cancer; funds, promotes, and collaborates on research projects; and advocates at the federal and state levels on behalf of patient interests.
* [http://mpablog.typepad.com/david_foster] Cancer veteran's blog with two years experience with Sutent, Nexavar and chemo.