The Territory of Dakota was an organized incorporated territory of the United States that existed from March 2, 1861, until November 2, 1889, when the final extent of the reduced territory was split and admitted to the Union as the states of North and South Dakota.

The Dakota Territory consisted of the northernmost part of the land acquired in the Louisiana Purchase of the United States. The name refers to the Dakota branch of the Sioux tribes which occupied the area at the time. Most of Dakota Territory was formerly part of the Minnesota and Nebraska territories. When Minnesota became a state in 1858, the leftover area between the Missouri River and Minnesota's western boundary fell unorganized. When the Yankton Treaty was signed later that year, ceding much of what had been Lakota land to the U.S. Government, early settlers formed an unofficial provisional government and unsuccessfully lobbied for United States territory status. Three years later soon-to-be-President Abraham Lincoln's cousin-in-law, J.B.S. Todd, personally lobbied for territory status and Washington formally created Dakota Territory.

It became an organized territory on March 2, 1861. Upon creation, Dakota Territory included much of present-day Montana and Wyoming; by 1868, creation of new territories reduced Dakota Territory to the present boundaries of the Dakotas. Territorial counties were defined in 1872, including Bottineau County, Cass County and others. 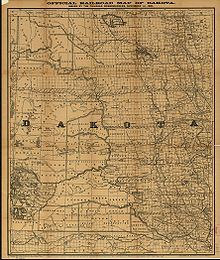 The territorial capital was Yankton from 1861 until 1883, when it was moved to Bismarck. The Dakota Territory was divided into the states of North Dakota and South Dakota on November 2, 1889. The admission of two states, as opposed to one, was done for a number of reasons. The two population centers in the territory were in the northeast and southeast corners of the territory, several hundred miles away from each other. On a national level, there was pressure from the Republican Party to admit two states to add to their political power in the Senate. A century later, with the populations of the two states at low levels, there were discussions of reuniting them as "Dakota", but this has never been seriously considered.

After becoming an organized territory, the population increased very slowly during the early years and then very rapidly with the "Dakota Boom" from 1870 to 1880.[1] The white population grew slowly for a number of reasons. Mainly, the Sioux Indians were considered very hostile and a threat to early settlers. They were gradually defeated and were not as severe a threat.[2] The population increase can largely be attributed to the growth of railroads, specifically the Northern Pacific Railroad. Settlers that came to the Dakota Territory were from other western territories as well as many from Northern and Western Europe. These included large numbers of Norwegians, Germans, Swedes, and Canadians.[3]

Commerce was organized around agriculture with wheat being the territory's main cash crop. Other economic activities included mining and cattle ranching. Gold was discovered in the Black Hills and attracted more settlers to the area. The population surge increased the demand for meat spurring expanded cattle ranching on the territory's vast open ranges. Economic hardship hit the territory in the 1880s due to lower wheat prices and a drought.[4]

Dakota Territory was the setting for the syndicated western television series, Man Without a Gun, starring Rex Reason as newspaper editor Adam McLean and Mort Mills as Marshal Frank Tillman. The program aired from 1957–1959.

The Disney musical film The One and Only, Genuine, Original Family Band takes place in the Dakota Territory during the time of the 1888 Presidential Election.

Dakota Territory was the setting for several novels by Laura Ingalls Wilder, including By the Shores of Silver Lake, The Long Winter, Little Town on the Prairie, These Happy Golden Years and The First Four Years.