Direct-Stream Digital (DSD) is the trademark name used by Sony and Philips for their system of recreating audible signals which uses pulse-density modulation encoding, a technology to store audio signals on digital storage media which is used for the Super Audio CD (SACD).

The signal is stored as delta-sigma modulated digital audio, a sequence of single bit values at a sampling rate of 64 times the CD Audio sampling rates of 44.1 kHz, for a rate of 2.8224 MHz (1 bit times 64 times 44.1 kHz). Noise shaping occurs by use of the 64× oversampled signal to reduce noise/distortion caused by the inaccuracy of quantization of the audio signal to a single bit. Therefore it is a topic of discussion whether it is possible to eliminate distortion in 1-bit Sigma-Delta conversion.[1]

Practical DSD converter implementations were pioneered by Andreas Koch and Ed Meitner, the original founders of EMM Labs. Andreas Koch later left EMM Labs and along with Jonathan Tinn, founded Playback Designs who have pioneered the transfer of DSD files over USB connections. Global DSD technology was developed by Sony and Philips, the designers of the audio CD. Philips' DSD tool division was transferred to Sonic Studio, LLC in 2005 for on-going design and development.

DSD technology may also have potential for video applications. A similar structure based on pulse-width modulation, which is decoded in the same way as DSD, has been used in Laserdisc video.

DSD is a method of storing a Delta-Sigma signal before applying a "decimation" process that converts the signal to a PCM signal. When Delta-Sigma conversion was originally described in patent 2,927,962 filed by C. C. Cutler in 1954 (But not named as such until a 1962 paper by H. Inose, Y. Yasuda, and J. Murakami), decimation did not exist and the intention was to have oversampled data sent as-is. Indeed, the first proposal to decimate oversampled delta-sigma data to convert it in to PCM audio did not appear until 1969, in D. J. Goodman's paper "The Application of Delta Modulation of Analog-to-PCM encoding".[2] 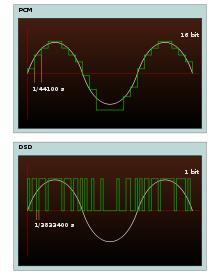 SACD audio is stored in a format called Direct Stream Digital (DSD), which differs from the conventional PCM used by the compact disc or conventional computer audio systems.

DSD is 1-bit, has a sampling rate of 2.8224 MHz, and makes use of noise shaping quantization techniques in order to push 1-bit quantization noise up to inaudible ultrasonic frequencies. This gives the format a greater dynamic range and wider frequency response than the CD. The SACD format is capable of delivering a dynamic range of 120 dB from 20 Hz to 20 kHz and an extended frequency response up to 100 kHz, although most currently available players list an upper limit of 80–90 kHz and 20 kHz is the upper limit of human hearing.

The process of creating a DSD signal is conceptually similar to taking a 1-bit delta-sigma analog-to-digital (A/D) converter and removing the decimator, which converts the 1-bit bitstream into multibit PCM. Instead, the 1-bit signal is recorded directly and in theory only requires a lowpass filter to reconstruct the original analog waveform. In reality it is a little more complex, and the analogy is incomplete in that 1-bit sigma-delta converters are these days rather unusual, one reason being that a 1-bit signal cannot be dithered properly: most modern sigma-delta converters are multibit.

Because of the nature of sigma-delta converters, one cannot make a direct comparison between DSD and PCM. An approximation is possible, though, and would place DSD in some aspects comparable to a PCM format that has a bit depth of 20 bits and a sampling frequency of 96 kHz.[3] PCM sampled at 24 bits provides a (theoretical) additional 24 dB of dynamic range.

Because it has been extremely difficult to carry out DSP operations (for example performing EQ, balance, panning and other changes in the digital domain) in a 1-bit environment, and because of the prevalence of studio equipment such as Pro Tools, which is solely PCM-based, the vast majority of SACDs — especially rock and contemporary music which relies on multitrack techniques — are in fact mixed in PCM (or mixed analog and recorded on PCM recorders) and then converted to DSD for SACD mastering.

To address some of these issues, a new studio format has been developed, usually referred to as "DSD-wide", which retains standard DSD's high sample rate but uses an 8-bit, rather than single-bit digital word length, but still relies heavily on the noise shaping principle. It becomes almost the same as PCM (it's sometimes disparagingly referred to as "PCM-narrow") but has the added benefit of making DSP operations in the studio a great deal more practical. The main difference is that "DSD-wide" still retains 2.8224 MHz (64Fs) sampling frequency while the highest frequency in which PCM is being edited is 352.8 kHz (8Fs). The "DSD-wide" signal is down-converted to regular DSD for SACD mastering. As a result of this technique and other developments there are now a few digital audio workstations (DAWs) that operate, or can operate, in the DSD domain, notably Pyramix and some SADiE systems.

Another format for DSD editing is DXD (Digital eXtreme Definition), a "PCM-like" signal with 24-bit resolution sampled at 352.8 kHz.

Note that high-resolution PCM (DVD-Audio, HD DVD and Blu-ray Disc) and DSD (SACD) may still technically differ at high frequencies. A reconstruction filter is typically used in PCM decoding systems, much the same way that bandwidth-limiting filters are normally used in PCM encoding systems. Any error or unwanted artifact introduced by such filters will typically affect the end-result. A claimed advantage of DSD is that product designers commonly choose to have no filtering, or modest filtering. Instead DSD leads to constant high levels of noise at these frequencies. DSD's dynamic range decreases quickly at frequencies over 20 kHz due to the use of strong noise shaping techniques which push the noise out of the audio band resulting in a rising noise floor just above 20 kHz. PCM's dynamic range, on the other hand, is the same at all frequencies. (Some high-end SACD players employ an optional low-pass filter set at 30 kHz for compatibility and safety reasons, suitable for situations where amplifiers or loudspeakers cannot deliver an undistorted output if noise above 30 kHz is present in the signal.)

Some professional audio recorders can record in DSD format. Transferring this signal to a recordable DVD with the appropriate tools, such as the Korg MR-1/2/1000/2000-bundled 'AudioGate'-software, will render a DSD Disc. Such discs can be played back/transcoded to PCM on the fly on PCs with the proper software plug-ins (for Windows Media Player or foobar2000), and in native DSD on certain Sony VAIO laptops and PlayStation 3.[4] HQPlayer from Feb 16 2011 ver 2.6.0 beta includes support for direct/native playback from DSDIFF and DSF files to ASIO devices with DSD support. Moreover, Sony produces two SACD-players, the SCD-XA5400ES and the SCD-XE800, that fully support the DSD-disc format. Only so-called DSF format is supported. DSF is a stereo-only, simplified form of DFF, the format used for SACD mastering and 5.1-channel downloads.

Playback Designs' players and converters and pro-audio company 'Mytek Digitals 192 Stereo DAC both sport DSD over USB capability. Apparently, this would provide owners of DSD-recorders from Korg, Tascam and others with a computer-based playback option for their (non-encrypted) DSD-files.[5] Whether these USB-DAC will be compatible with the DSD-disc specification still remains to be seen.

DSD-CD is a variant of the Compact Disc Digital Audio format. The difference from the standard version of CD is that the sound is derived from a DSD master. A DSD-CD however does not achieve the same sound resolution as SACD because the high-resolution DSD sound has to be down-converted to 44.1 kHz, 16-bit PCM in order to be compliant with the 'Red Book' audio CD standard. DSD-CDs are fully compatible with CD.

DSD-CD has been marketed as an audiophile medium, primarily in Hong Kong with music by Cantopop artists such as Sally Yeh.[6]

When comparing a DSD and PCM recording of the same origin, the same number of channels and similar bandwidth/SNR, some still think that there are differences. A study conducted at the Erik-Thienhaus Institute in Detmold, Germany, seems to contradict this, concluding that "hardly any of the subjects could make a reproducible distinction between the two encoding systems. Hence it may be concluded that no significant differences are audible."[7]