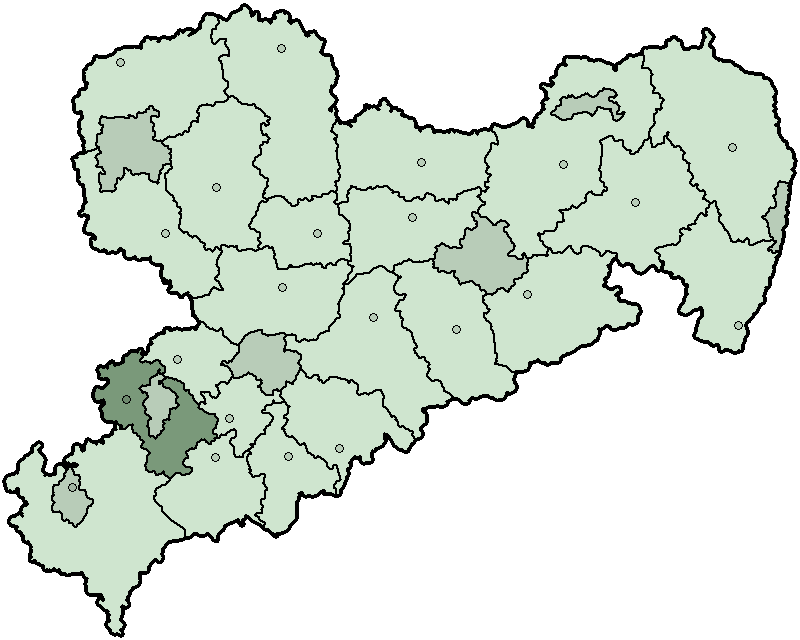 Zwickauer Land is a former Kreis () in the south-west of the , . Neighboring districts were (from north-east clockwise) , Stollberg, , , and the districts Greiz and in . The district-free city of was located in the center of the district and nearly completely surrounded by it.

In early days Zwickau was the starting point for the settlement of a whole region. The first official document of the ”territorim zwickaw” dates from May 1, 1118. The settlement by German farmers took mainly place in the second half of the 12th century. At the same time castles were built. A special area was administered by a bailiff, as a representative of the governor. The Wettiners were the most powerful rulers in Saxony in the 13th century. In the region of Zwickau the sovereign of Schönburg and Wildenfels were given the rule over their comparatively small territories.

With the division of the Saxon country the administrative structures became unclear in Leipzig in 1485. The borderline between albertinian and ernestinian possession was tangent to the Zwickauer city boundary. With the development of the Saxon state uniformed administrative structures began gradually to develop. In the Middle Ages the Saxon area was divided into governor’s residence, apart from the central administration. Out of this new jobs developed in the 15th century. The “administrators” (Amtsmann) practised the jurisdiction, and were responsible for the military quantity and public security.

The administrators came from the rural aristocracy. The noble administrator was promoted to the “chief administrator” (Amtshauptmann) during the following century, who usually supervised two to four offices. At the same time the “Kursaxon” territory was divided into districts for a better administration. The district was headed by a “county administrator” (Kreishauptmann or Oberhauptmann).

During the whole Middle Ages and afterwards – even until our century - the city Zwickau with their surrounding area was regarded as a unit, concerning administrative matters.

Ongoing conflicts, for example the and the , influenced the administration negatively.

Zwickau was the seat of the chief administrator. Since 1828, additionally the county administrators ruled from there the Southwest and the middle “Erzgebirge” and the suburbs.

The following offices were headed by the chief administrator in Zwickau: Kirchberg, Werdau, Schwarzenberg, Eibenstock and of course Zwickau. Hartenstein, Lichtenstein, Stein, Waldenburg and Glauchau were controlled by the sovereign of Schönburg.

In 1856 an important step toward modern administration was done with the establishment of new administration offices, the “offices of court” (Gerichtsamt). Thereby the old office organization could be overcome.

In 1919 a branch office of Zwickau was opened in Werdau. It became an independent office in 1920, but in 1933 it was affiliated to Zwickau again.

With the dramatic events in autumn 1989, the came down. The German Democratic Republic ceased to exist as Germany was re-united. With Saxon parliamentary elections on October 14, 1990, the federal state of Saxony was re-established. On May 6, 1990 local elections took place. At the constituent meeting of district assembly Christian Otto was elected head of the administration of the district Zwickau. In the district Werdau the citizens elected to head of the administration.

With the district reform on 1 August 1994, the rural district “Zwickauer Land” was created, seated in Werdau. With the termination of the municipality regional reorganization on January 1, 1999, the district changed its geographical face again. The places Cainsdorf, Mosel, Oberrothenbach and Schlunzig were affiliated to Zwickau against the will of the people living there.

The district is located in the Ore Mountains ("Erzgebirge"), with the main river s being the "Zwickauer Mulde" and the "Pleiße".