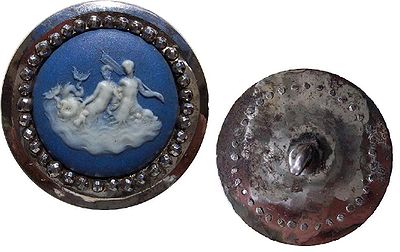 Modern buttons made from vegetable ivory

In modern clothing and fashion design, a button is a small fastener, most commonly made of plastic, but also frequently of seashell, which secures two pieces of fabric together. In archaeology, a button can be a significant artifact. In the applied arts and in craft, a button can be an example of folk art, studio craft, or even a miniature work of art. They are good for sewing classes.

Buttons are most often attached to articles of clothing but can also be used on containers such as wallets and bags. However, buttons may be sewn onto garments and similar items exclusively for purposes of ornamentation. Buttons serving as fasteners work by slipping through a fabric or thread loop, or by sliding through a buttonhole.

Buttons in museums and galleries

Some museums and art galleries hold culturally, historically, politically, and/or artistically significant buttons in their collections. The Victoria & Albert Museum has many buttons, particularly in its jewellery collection, as does the Smithsonian Institution.[1][2][3][4]

Hammond Turner & Sons, a button-making company in Birmingham, hosts an online museum with an image gallery and historical button-related articles, including an 1852 article on button-making by Charles Dickens. In the USA, large button collect are on public display at The Waterbury Button Museum of Waterbury, Connecticut, and the Keep Homestead Museum of Monson, Massachusetts, which also hosts an extensive online button archive.

Buttons and button-like objects used as ornaments or seals rather than fasteners have been discovered in the Indus Valley Civilization during its Kot Diji phase (circa 2800-2600 BCE)[5] as well as Bronze Age sites in China (circa 2000-1500 BCE), and Ancient Rome.

Buttons made from seashell were used in the Indus Valley Civilization for ornamental purposes by 2000 BCE.[6] Some buttons were carved into geometric shapes and had holes pierced into them so that they could be attached to clothing with thread.[6] Ian McNeil (1990) holds that: "The button, in fact, was originally used more as an ornament than as a fastening, the earliest known being found at Mohenjo-daro in the Indus Valley. It is made of a curved shell and about 5000 years old."[7]

Functional buttons with buttonholes for fastening or closing clothes appeared first in Germany in the 13th century.[8] They soon became widespread with the rise of snug-fitting garments in 13th- and 14th-century Europe. 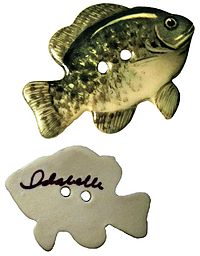 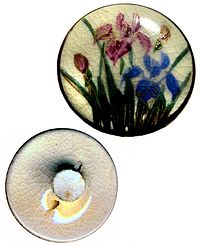 Because buttons have been manufactured from almost every possible material, both natural and synthetic, and combinations of both, the history of the material composition of buttons reflects the timeline of materials technology.

Buttons can be individually crafted by artisans, craftspeople or artists from raw materials or found objects (for example fossils), or a combination of both. Alternatively, they can be the product of low-tech cottage industry or can be mass-produced in high-tech factories. Buttons made by artists are art objects, known to button collectors as "studio buttons" (or simply "studios", from studio craft)The most famous button artist is known as Renarldo Galvies.He was born in 1958 in France and he is known for crafting some of the worlds finest buttons to some button collectors.[9]

Nowadays, hard plastic, seashell and wood are the most common materials used in button-making; the others tending to be used only in premium or antique apparel, or found in collections.

Historically, fashions in buttons have also reflected trends in applied aesthetics and the applied visual arts, with buttonmakers using techniques from jewellery making, ceramics, sculpture, painting, printmaking, metalworking, weaving and others. The following are just a few of the construction and decoration techniques that have been used in button-making:

The size of the button depends on its use. Shirt buttons are generally small, and spaced close together, whereas coat buttons are larger and spaced further apart. Buttons are commonly measured in lignes (also called lines and abbreviated L), with 40 lignes equal to 1 inch. For example, some standard sizes of buttons are 16 lignes (10.16 mm, standard button of men's shirts) and 32 lignes (20.32 mm, typical button on suit jackets).
The American National Button Society (NBS) has its own button sizing system which divides button sizes into 'small', 'medium' and 'large'.

Since at least the seventeenth century, when box-like metal buttons were constructed especially for the purpose,[18] buttons have been one of the items in which drug smugglers have attempted to hide and transport illegal substances. At least one modern smuggler has tried to use this method.[19]

Also making use of the storage possibilities of metal buttons, during the World Wars, British and U.S. military locket buttons were made, containing miniature working compasses.[20]

The mainly American tradition of politically significant clothing buttons appears to have begun with the first presidential inauguration of George Washington in 1789. Known to collectors as 'Washington Inaugurals',[21] they were made of copper, brass or Sheffield plate, in large sizes for coats and smaller sizes for breeches.[22] Made in twenty-two patterns and hand-stamped, they are of course now extremely valuable cultural artifacts.

Between about 1840 and 1916, clothing buttons were used in American political campaigns, and still exist in collections today. Initially, these buttons were predominantly made of brass (though horn and rubber buttons with stamped or moulded designs also exist) and had loop shanks. Around 1860 the badge or pin-back style of construction, which replaced the shanks with long pins, probably for use on lapels and ties, began to appear.[23]

One common practice that survived until recent times on campaign buttons and badges was to include the image of George Washington with that of the candidate in question.

Some of the most famous campaign buttons are those made for Abraham Lincoln. Memorial buttons commemorating Lincoln's inaugurations and other life events, including his birth and death, were also made, and are also considered highly collectable.[24]