Palatinate-Zweibrücken (German: Pfalz-Zweibrücken) is a former state of the Holy Roman Empire. Its capital was Zweibrücken.

The Duchy of Palatinate-Zweibrücken ceased to exist in 1801, when it was annexed by France. After the Congress of Vienna, in 1815, it was returned to the last Duke, King Maximilian I Joseph of Bavaria, who joined it with other Bavarian territories on the left bank of the Rhine to form the Rhenish Palatinate.

The principality was conceived in 1444 and realized in 1453 by a division of Palatinate-Simmern and Zweibrücken. which had been created in 1410 for Stephen, the third son of Count Palatine Rupert III or the Rhine. In 1444, Stephen inherited the County of Veldenz from his father-in-law, Count Frederick III of Veldenz. This enabled him to divide his possessions between his sons, Frederick I and Louis I. In 1453, Stephen abdicated and divided his country between his sons. The elder son Frederick I received the County of Sponheim and the title of Count of Sponheim; he also received the northern half of the Principality of Palatinate-Simmern and Zweibrücken. The younger son, Louis I, received the County of Veldenz and the title of Count of Veldenz from his grandfather's inheritance and the southern half of Palatinate-Zweibrücken-Simmern. Louis's half included the fromer County of Zweibrücken, which the Palatinate had acquired in 1385. Among Stefan's titles were "Count Palatine of the Rhine" and "Duke in Bavaria". Both sons inherited the right to use theses titles, which is why the two newly formed principalities of Palatinate Simmern and Palatinate Zweibrücken were usually describes as Duchies or Counties Palatine. 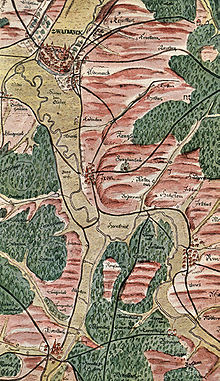 Zweibruecken on a map from 1564 by Tilemann Stella

An Amt was an administrative district; an Oberamt was a larger district, subdivided into Unterämter.

Guttenberg, Seltz and Hagenbach and Bischwiller were French fiefs, the others were German.

During the reign of Louis I, who conducted four unsuccessful feuds against his cousin Elector Palatine Frederick I, the districts of Lambsheim, Wachenheim and Waldböckelheim were lost to the Palatinate. Emperor Frederick III, who was also in conflict with the Electoral Palatinate, appointed Louis I as his field marshall and recognized Palatinate Zweibrücken as a duchy. Louis I stimulated mining and simplified the administration of the duchy.

Initially Meisenheim was the capital. In 1477, the Electoral Palatinate threatened Meisenheim and the capital had to be moved to Zweibrücken, where it remained until 1793.

After Louis's death, the duchy was not divided. His testament required dukes Alexander and Kaspar to rule the duchy jointly. However, Alexander declared his older brother mentally ill, locked him up and ruled the duchy alone. Alexander also waged war on the Electoral Palatinate; his troops looted the Palatinate during the Landshut War of Succession. In 1505, when the war ended with an imperial decision, some territory was transferred from the Electoral Palatinate to Palatinate Zweibrücken. Alexander concluded an inheritance treary with the new Elector Philip, which considerably improved relations between the two countries.

Alexander and Louis II introduced primogeniture, the rule that the whole of the principality would henceforth be inhertited by the oldest son. Bischweiler was acquired in 1542, during the regency of Count Palatine Ruper of Veldenz. In 1544, the cadet branch of Palatinate-Veldenz split off. In 1553, the County of Lützelstein (now La Petite-Pierre in Alsace) was purchased from the Electoral Palatinate. Count Palatine Wolfgang dissolved the monasteries in his territory and thereby increased his revenues and acquired the territory of Disibodenberg Abbey. In 1557, he inherited Palatinate-Neuburg, half of the Rear County of Sponheim and half of the Lordship of Guttenberg from the Palatinate under the Treaty of Heidelberg; this more than doubled his territory. In 1558, he dissolved Hornbach Abbey an took its territory and half the County of Molsheim. In 1559, the Electoral line died out and Wolfgang inherited a share in the Front County of Sponheim. He used these large gains to give each of his five sons some territory: the sovereign Palatinate-Neuburg and Palatinate-Zweibrücken, which fell to John I's second son in 1569, and the non-sovereign collateral lines Palatinate-Sulzbach, Palatinate-Vohenstrauß-Parkstein and Palatinate-Birkenfeld.

During the Thirty Years' War, the Duchy was occupied by imperial forces and Count Palatine John II had to flee to Metz. His son and successor Frederick returned in 1645. When Frederick died without a male heir in 1661, he was succeed by his cousin Frederick Louis. During his reign, the country was occupied by France in 1676. Zweibrücken was a fief of the Bishopric of Metz, which had been annexed by France. In 1680, France therefore annexed Zweibrücken as well. In 1618, Frederick Louis died in exile, without a male heir.

The 1697 Treaty of Ryswick returned the Duchy to its rightful owner. Since Frederick Louis had died without a male heir, the Duchy was returned to his first cousin once removed Charles II of Palatinate-Kleeburg, who was also King of Sweden as Charles XI.

From 1725 to 1778, the counts palatine resided in Zweibrücken Palace; they then moved to Karlsberg Castle near Homburg, to emphasize their claim to inherit the Duchy of Bavaria. Members of the ruling family were buried in the Castle Church in Meisenheim and later in the Alexander Church in Zweibrücken (which was badly damaged in World War II).

Gustav was the last Count Palatine of the Palatinate-Kleeburg line; when he died in 1731 without a male heir, the duchy was impounded by the Empire. In 1734, the Emperor invested Count Palatine Christian III of Palatinate-Birkenfeld with Zweibrücken. His duchy had been split off from Zweibrücken in 1584. His son Christian IV turned Catholic in 1758.

During Christian IV, the fragmentation of the area was reduced by swapping territories. For example, in 1768, Odernheim and half of Molsheim where transferred to the Electoral Palatinate, in exchange for Neuburg, the district of Hagenbach, district of Selz and Selz Abbey. In 1776, the Rear County of Sponheim was divided between Zweibrücken and Baden, with Zweibrücken receiving Kastellaun, Traben-Trarbach with Starkenburg and Allenbach, and Baden receiving Birkenfeld, Frauenburg and Herrstein.

The duchy was conquered in 1793 by French revolutionary troops. On 4 November 1797, the occupied territory was incorporated into the newly founded French département of Mont-Tonnerre (capital: Mainz) legally part of France. The annexation by France was recognized internationally by the Treaty of Luneville. In 1799, the last Count Palatine of Zweibrücken, Maximilian Joseph, became Elector of Bavaria, as Maximilian IV Joseph, as well as Elector Palatine, as Maximilian II Joseph.

In 1806, Maximilian Joseph became King of Bavaria, as Maximilian I Joseph, and the rôle of Elector ceased to exist.

After the Congress of Vienna, the Palatinate territory was returned to the Wittelsbach family, except the Alsatian part of the country, which remained French. Maximilian Joseph then combined Zweibrücken with his other Palatinate possessions, forming the Rheinkreis.

In the duchy there was no authority that would have limited the power of the Duke. Even the urban population were technically serfs, until this was repealed by John I on 21 April 1571, although the situation in the city of Zweibrücken had already been somewhat eased by decrees from the years 1352 and 1483. Young men were required to serve six years in the militia.

The highest administrative body was the cabinet; the Duke participated in its meetings. The Treasury was responsible for finance, mining and forestry. There was no separation between the judiciary and the administration. Justice was meted out by officials with the rank of Schultheiß. The highest court in the land was the Court of Appeals in Zweibrücken; its traditions are continued today by the Oberlandesgericht in Zweibrücken. After 1774, appeals from the court in Zweibrücken to the Reichskammergericht were no longer possible. In the Alsatian parts of the country, however, appeals to the Conseil souverain d’ Alsace in Colmar were possible from about 1680. Important statutes were the Court Jucicial Order of 1605, the Lower Court Order of 1657, and later the Criminal Procedure of 1724 and Marriage and Guardianship Regulations. In areas where no state law was available, imperial law was used.

View of Zweibrücken; engraving after a painting by Theodor Verhas

The Reformation was introduced in Palatinate Zweibrücken in 1533 by the chaplain and later parish priest of Johann Schwebel and Count Palatine Rupert of Veldenz, who was acting as regent for Wolfgang, who was still a minor. Theologocally, Schwebel followed the loead of Martin Bucer in Strasbourg. After Schwebel died in 1540 and Wolfgang took over in 1544, however, Zweibrücken came under Lutheran influence, which was settled in 1577 in a Church Order by chancellor Ulrich Sitzinger.

After Wolfgang's death, his son John I joined the Reformed confession in 1588. In the dies decretorius year 1624, Zweibrücken was still ruled by a Reformed prince, so under the rules of the 1648 Peace of Westphalia, this became the established religion. In the period of the French Reunion (1680–1697), Catholic churches were again admitted and in 1697 under the Swedish administration after the Treaty of Ryswick, Lutheran congragations were re-established as well.

Administratively, the Reformed Church was organized similar to the secular authorities: each secular district corresponded with a church district headed by a superintendent, or an insprector (during the Reformed period). The priests were state officials and were regularly visited by a commission consisting of the district superintendent, the secular bailiff and a representative of the central administration in Zweibrücken. There was no bishop or church president, although the superintendaent of Zweibrücken had a more prominent position than his colleagues. The parish churches of the individual districts convened regularly; sometimes all clergy in the duchy convened in a national synod. There was no institutionalized national church council; initially this function was exercised by the secular cabinet college, assisted by the superintendent of Zweibrücken. In the 18th Century, however, a national church council was created; its membership consisting of secular councillors.

From the beginning, the lay element played a special role in the church in Zweibrücken. The Reformation revived the ancient office of the Elder, lay people chosen by the community, who would supervise the lifestyle of the congregation and the pastor and the funds and property of the parish.

Coat of arms of Palatinate-Zweibrücken in 1720

Around 1720, Palatinate-Zweibrücken added the symbols of the United Duchies of Jülich-Cleves-Berg to its coat of arms. It was parted per gale. The dexter side was quartered, in the first and fourth quarter the Palatine Lions, in second and third the Bavarian white and blue oblique fusils; escutcheoned with a crowned lion in a white box. The sinister side was split twice and divided once and contains the lion of Jülich, the lilies of Cleves, the lion of Berg, thethe red and white checkered fess of Mark, the spit bars of Ravensberg and the bar of Moers.[1] 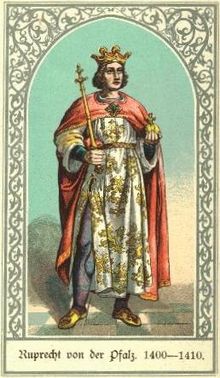 Rupert III, as King of the Romans