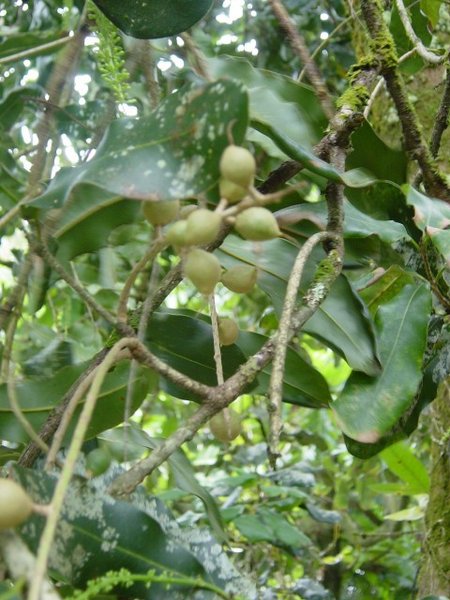 "Macadamia" is a of nine of s in the family , with a native to eastern (seven species), (one species " [http://www.iucnredlist.org/search/details.php/31009/all M. neurophylla] ") and in (one species, "M. hildebrandii").

They are small to large s growing to 6–40 feet tall. The leaves are arranged in whorls of three to six, lanceolate to obovate or elliptical in shape, 6–30 cm long and 2–13 cm broad, with an entire or spiny-serrated margin. The s are produced in a long slender simple 5–30 cm long, the individual flowers 10–15 mm long, white to pink or purple, with four s. The is a very hard woody globose follicle with a pointed apex, containing one or two s.

The nuts are a valuable . Only two of the species, "" and "", are of commercial importance. The remainder of the genus possess poisonous and/or inedible nuts, such as "M. whelanii" and "M. ternifolia"; the toxicity is due to the presence of cyanogenic glycosides. These glycosides can be removed by prolonged leaching, a practice carried out by some people in order to use these species as well.

The two species of macadamia readily hybridise, and "M. tetraphylla" is threatened in the wild due to this. Wild nut trees were originally found at Mount Bauple near Maryborough in southeast , Australia. Locals in this area still refer to them as "Bauple nuts". The macadamia nut is the only plant food native to Australia that is produced and exported in any significant quantity.Fact|date=October 2008

The first commercial orchard of macadamia trees was planted in the early 1880s by Charles Staff at Rous Mill, 12 km southeast of , consisting of "M. tetraphylla". [ Power, J., "Macadamia Power in a Nutshell", 1982, ISBN 0-9592892-0-8, p. 13.] Besides the development of a small boutique industry in Australia during the late 19th and early 20th century, macadamia was extensively planted as a commercial crop in from the 1920s.

The Hawaiian-produced macadamia established the nut internationally. However, macadamia production is now falling in Hawaii, with nut production dropping to a 26-year low in 2008 due to bad weather and pests. [ [http://www.honoluluadvertiser.com/apps/pbcs.dll/article?AID=/20080721/BUSINESS11/807210319/1071"Mac nut production falls"] , Honolulu Advertiser, July 21, 2008. Accessed .]

Outside of Hawaii and Australia, macadamia is also commercially produced in , , , , , , , and . Australia is now the world's largest commercial producer - at approximately 40,000 tonnes of nut in shell per year, with a total global production of 100,000 tonnes.

Macadamias are highly nutritious nuts. They have the highest amount of beneficial monosaturated fats of any nut. They also contain 9% , 9% , 2% , , , , , , , , and . [Macadamia nutrition. [http://www.macadamiacastle.com.au/story/macamania.html] ]

is prized for containing approximately 22% of the Omega-7 , [Languageicon|de|German/Languageicon|en|English [http://sofa.bfel.de/] , Federal Research Centre for Nutrition and Food (Bundesforschungsanstalt für Ernährung und Lebensmittel (BfEL)).] which makes it a botanical alternative to , which contains approximately 17%. This relatively high content of "cushiony" palmitoleic acid plus macadamia's high oxidative stability make it a desirable ingredient in cosmetics, especially skincare.

The macadamia tree is usually propagated by , and does not begin to produce commercial quantities of nuts until it is 7–10 years old, but once established, may continue bearing for over 100 years. Macadamias prefer fertile, well-drained soils, a rainfall of 1,000–2,000 mm, and temperatures not falling below 10°C (although once established they can withstand light frosts), with an optimum temperature of 25°C. The roots are shallow and trees can be blown down in storms; they are also susceptible to "" root disease.

The macadamia nut has an extremely hard shell, but can be cracked using a blunt instrument, such as a hammer or rock applied with some force to the nut sitting in a concave surface, or a custom made macadamia nutcracker can be used. Nuts of the "Arkin Papershell" variety, crack open more readily.

* For thousands of years before European settlement the aborigines ate the native nut that grew in rainforests of eastern . One of these nuts was called gyndl or jindilli ("Macadmaia integrifolia"), which was later corrupted to kindal kindal by early Europeans. In New South Wales, the southern species is known traditionally as boombera ("Macadamia tetraphylla"). [ Macadamia history. [http://www.macadamiacastle.com.au/story/history.html] ]

* 1828 - is the first European to discover the macadamia plant.

* 1860s - King Jacky, Aboriginal elder of the Logan River clan, south of Brisbane, Queensland, is the first known macadamia nut entrepreneur as he and his tribe regularly collect and trade the nuts with settlers.

* 1937 - W.W. Jones and J.H. Beaumont reports in "Science," the first successful grafting of macadamia nuts that paved the way for mass production.

* 1953 - Castle and Cooke adds a new brand of macadamia nuts called "Royal Hawaiian," which is credited with popularizing the nuts in the U.S.

* Macadamia nuts are often fed to s in captivity. [cite web | author=Kashmir Csaky | year=2001 | url=http://www.bluemacaws.org/avi18.htm | title=The Hyacinth Macaw. | format= | work= | publisher= | accessdate=15 May | accessyear=2007 ] These large s are one of the few animals, aside from humans, capable of cracking and shelling the nut.

* Macadamia nuts are to s. Ingestion may result in macadamia nut , which is marked by with the inability to stand within 12 hours of ingestion. Recovery is usually within 48 hours. [ [http://www.aspca.org/site/DocServer/toxbrief_0402.pdf?docID=115 "Macadamia nut toxicosis in dogs"] , Steven R. Hansen, DVM, MS, DABVT. ASPCA.org. Reprinted with permission from the April 2002 issue of "Veterinary Medicine". Accessed .]

* The trees are also grown as s in subtropical regions for their glossy foliage and attractive flowers.

* Macadamia species are used as food plants by the e of some species including "Batrachedra arenosella".