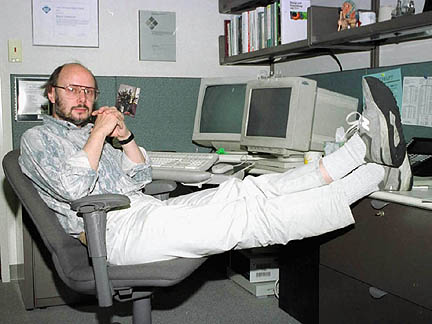 Bjarne Stroustrup (IPA|/'bjɑːnə 'sdʁʌʊ̯ˀsdʁɔb/ ; born , in , ) is a and the College of Engineering Chair Professor of at . He is most notable for developing the . A rough English attempt at pronunciation of his name would be "B-yar-ne Strov-stroop" [ [http://www.research.att.com/~bs/pronounciation.wav research.att.com: audio (WAV) file on how to pronounce Bjarne's name] ] .

Stroustrup began developing C++ in 1979 (then called "C with Classes"), and, in his own words, "invented C++, wrote its early definitions, and produced its first implementation... chose and formulated the design criteria for C++, designed all its major facilities, and was responsible for the processing of extension proposals in the C++ standards committee." ["The C++ Programming Language", B. Stroustrup, p.10] Stroustrup also wrote what many consider to be the standard text for the language, "", which is now in its third edition. The text has been revised twice to reflect the evolution of the language and the work of the C++ standards committee.

Stroustrup has a "cand. scient." (the Danish equivalent to a ) in and (1975) from the , Denmark, and a Ph.D. in computer science (1979) from the , . He was the head of AT&T Lab's Large-scale Programming Research department, from its creation until late 2002. Stroustrup was elected member of The National Academy of Engineering in 2004. He is a Fellow of the ACM (1994) and an Fellow. He currently works at as a Professor where he holds the College of Engineering Chair in . [ [http://www.research.att.com/~bs/bio.html Bjarne Stroustrup: Some Information about Bjarne Stroustrup] ]