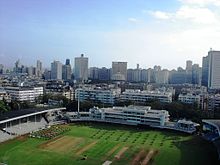 Cricket Club of India (CCI) is located on Dinsha Wacha Road, near Churchgate in Mumbai, India. It is one of the oldest and most well known cricket clubs in India. It was conceived as India's Marylebone Cricket Club (MCC) and is every bit as exclusive and luxurious as the MCC.[1][2]

On 8 November 1933, the Cricket Club of India was incorporated as a company limited by guarantee with its registered office in New Delhi. As the name suggests, the principal object of the company was to promote sports in general and cricket in particular throughout the country. The promoters and some leading men who founded BCCI five years before were the promoters of the Club. Originally, life members, who were later termed as founder members, paid Rs 100 and ordinary members paid Rs 10 for entrance and an annual subscription of Rs 15 . The CCI is one of the 30 members of the BCCI, the governing body of cricket in India. [3]

The Cricket Club of India was also the birthplace of the famous Chinese-style dish Chicken Manchurian; restaurateur Nelson Wang, who claims to have invented it at the request of a customer in 1975 while working at the CCI as a cook.[4]

The CCI also houses in the Brabourne Stadium, which the club owns. [2] The CCI is an affiliated member of the BCCI like any other state association, but unlike any one of them, does not conduct cricket in the state. Mumbai Cricket Association and Maharashtra Cricket Association which conduct cricket in Mumbai and rest of Maharashtra respectively. The stadium has one of the best cricket pitches and grounds in the region. It also has tennis courts [5], a swimming pool [6], fitness centers, a billiards room, squash courts, badminton courts, table tennis tables, cafes, bars, a library, a reading room and a banquet hall [7].It is very difficult to get membership into this exclusive club.[8]

The stadium also serves as the headquarters of the BCCI, the governing body of Indian cricket.[9]

The Mens Doubles finals in 2007

The Cricket Club of India Limited staged 5 matches of the ICC Champions Trophy in 2006 including the final between Australia and West Indies played on 5 November 2006. [11]