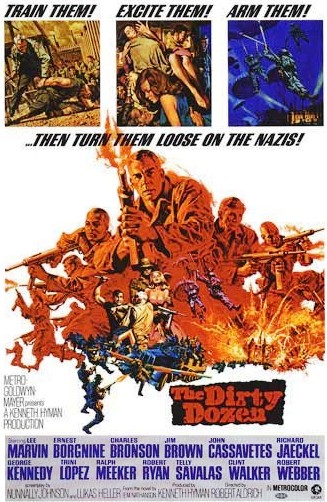 "The Dirty Dozen" is a fy|1967 action- directed by , from the novel by , featuring , , , and NFL Hall of Famer . Though ostensibly about World War II, the story deals with contemporary 1967 themes of individualism vs. collectivism, cultural relativism, internal and external racism, and their meanings within patriotism and duty in war.

In , in the spring of 1944, Allied forces are preparing for the invasion. Among them are Major John Reisman (), an OSS officer; his commander, Major General Worden (), and his former commander Colonel Everett Dasher Breed (). Early in the film the personalities of the three men are shown to clash and the character of the individualistic Reisman and the domineering Breed is established.

Major Reisman is assigned an unusual and top-secret pre-invasion mission: take twelve American soldiers convicted of capital offences, either serving sentences of hard labour or awaiting execution, and whip them into a unit capable of carrying out the task. The plan, as described, is to infiltrate a near Rennes, in , used as a retreat for senior officers, on the eve of the invasion. Without having complete intelligence as to the identity of the guests, it was felt that the elimination of officers in the German high command or senior staff could cripple or confuse the German military's ability to respond at the time of crisis. It is quickly established that both Reisman and the generals with whom he frequently clashes consider the mission to be a suicidal long shot.

The film unfolds in three major acts; the first act identifies and "recruits" the prisoners, depicts the unit in training and highlights the interpersonal conflict between the men, some of whom see the mission as a chance for redemption and others as a chance for escape.

The second act places the mission, and the characters, in jeopardy when a breach of military regulations on Reisman's part forces General Worden, at Breed's urging, to have the men - now dubbed the Dirty Dozen by Sergeant Bowren () because of their refusal to shave or bathe as a protest against their living conditions - prove their worth as soldiers.

The final act, which was a mere footnote in the novel, is a set piece action sequence depicting in detail the attack on the chateau.

Reisman interviews the dozen convicts chosen for the mission: they include a (), a religious fanatic (), a cynical ex-officer () and a black activist (). They are taken to an isolated part of the country under the guard of a squad of led by Sergeant Bowren, who proves an able second-in-command to Reisman.

The individualists who are the dozen convicts are shown to mature, grow and coalesce in to a team, at one point resolving to not shave or bathe until given hot water, hence, becoming "The Dirty Dozen". Later, they prove their regained military value in a field training exercise that suits Major Reisman's professional and personal goals in his feud with Colonel Breed. In the course of the first part, the soldiers represent the good, bad, and mediocre of American society during the war time shown. Yet director Aldrich's themes are externally directed at the current American war against .

The team demonstrates its unity with the operational count-off: "One: down to the road block, we've just begun; Two: the guards are through; Three: the Major's men are on a spree; Four: Major and Wladislaw go through the door; Five: Pinkley stays out in the drive; Six: the Major gives the rope a fix; Seven: Wladislaw throws the hook to heaven; Eight: Jiménez has got a date; Nine: the other guys go up the line; Ten: Sawyer and Gilpin are in the pen; Eleven: Posey guards points five and seven; Twelve: Wladislaw and the Major go down to delve; Thirteen: Franko goes up without being seen; Fourteen: Zero-hour, Jiménez cuts the cable, Franko cuts the phone; Fifteen: Franko goes in where the others have been; Sixteen: we all come out like it's Halloween."

Sergeant Bowren is also part of the mission. Landing in , they discover themselves short one man; Jiménez broke his neck in the parachute jump. They approach the château gate in German uniform, shooting (with silenced pistols) and knifing the guards, commando-style. Wladislaw, who "speaks" rudimentary German, and Reisman enter the château as guests, spill ink on the guest register so they do not have to "sign" in German, and go to their room, beginning to sneak in several of their men.

The plan goes awry when a German woman walks into the room where Maggot is hiding. He pokes his bayonet to her throat and pushes her out into the hallway. Yielding to his sadism, he urges her to scream, then stabs her to death just when she thinks he will not kill her because she's done as he wished. Downstairs, the Wehrmacht officers mistake her death scream for passion; only Maggot's subsequent gunfire alerts them of the attack. Gilpin was to blow up the rooftop radio-telephone antenna but was pinned when his leg breached rotting roof slats upon approach. He dies when he explodes the antenna tower in spite of his inability to free himself. Panic ensues and the Germans flee to an underground bomb shelter; Wladislaw and Reisman lock them in.

Resorting to plan-B, they seed the shelter's air vents with hand grenades, then pour / down the vent shafts; Jefferson is assigned to run to each vent, drop a live grenade, and escape. The German officers and their women will be incinerated alive, a brutal tactic, ironically in the style.

Meanwhile, most of the Dirty Dozen are killed by s and German soldiers counter-attacking from the main road. Fighting their way out, Maj. Reisman, Wladislaw, Sgt. Bowren and Franko escape in a German heavy half-tracked transport (hot wired by the criminally-resourceful Franko); Reisman, Bowren and one of the Dirty Dozen, Wladislaw, survive the suicide mission after Franko, having boasted that they've made it, gets shot in the back by a surviving German soldier.

The film concludes in a hospital room where Sgt Bowren on crutches is shown visiting Reisman and Wladislaw who are bedridden with broken bones and other serious wounds received in the battle. They are visited by the general officers, their former tormentors who sent them on this suicide mission who now have nothing but smiles and praise for the survivors. Wladislaw is heard to mutter "Oh boy..killing generals could get to be a habit with me".

For the 1960s, "The Dirty Dozen" was an unconventional, extremely violent war film. The violence shocked , who, in his first year as a film reviewer for the "", wrote:

I'm glad the Chicago Police Censor Board forgot about that part of the local censorship law where it says films shall not depict the burning of the human body. If you have to censor, stick to censoring sex, I say...but leave in the mutilation, leave in the sadism and by all means leave in the human beings burning to death. It's not obscene as long as they burn to death with their clothes on. [ [http://rogerebert.suntimes.com/apps/pbcs.dll/article?AID=/19670726/REVIEWS/707260301/1023 Roger Ebert's review] ]

The film was a box office hit particularly among young male film goers. It has remained popular on such revival vehicles as TBS and TCM. Lee Marvin's character as the cynical and insubordinate maverick who repeatedly defies and insults the brass generated a strong resonance with audiences then and now. To the discomfort of the , the film did very well when played on and/or near US military installations around the world as well as home.

*In the preface, writer E.M. Nathanson speaks of such a legendary unit, but found no record of it. As in movie and book, it is unlikely a group of sociopaths could be transformed into a commando unit. The film's popularity is in the viewer's strongly identifying with Maj. Reisman, the chagrin of the brass.
*Capital crime executions in the U.S. Army were not uncommon; the most famous is that of deserter . HMP Shepton Mallet prison was operated by the American military; per the of 1942, eighteen men were put to death; sixteen hanged and two shot.
*Despite rumours, "The Dirty Dozen" is based on the , an airborne demolition unit documented in the eponymous book. [ [http://www.amazon.com/dp/1932033122/ Amazon.com: The Filthy Thirteen: From the Dustbowl to Hitler's Eagle's Nest :The True Story of the101st Airborne's Most Legendary Squad of Combat Paratroopers: Richard Killblane,Jake McNiece: Books ] ] Unlike the "Dirty Dozen", the "Filthy Thirteen" were not convicts. The "Filthy Thirteen" leader, Jake McNeece, wrote the book. He has lectured in Europe, especially in D-Day celebrations (the 50th and 60th anniversaries). He retired as a Private, because he was continually demoted for insubordination. He lives in Oklahoma.

Although Robert Aldrich had tried to buy the rights to E.M. Nathanson's novel "The Dirty Dozen" while it was just an outline, MGM succeeded in May 1963. It was a best-seller on publication in 1965.

The English prison camp location scenes were filmed at in . The château was built especially for the production, by art director William Hutchinson, it was 240 ft. wide and 50 ft. high, surrounded with 5,400 sq. yds. of heather, 400 ferns, 450 shrubs, 30 spruce trees and 6 weeping willows. Construction of the faux château proved problematic. The script required its explosion, but it was so solid that 70 tons of explosives would have been required for the effect. Instead, a cork and plastic section was destroyed.

The cast included many World War II US veterans, including (Marines), and (Army), (Navy) and (Merchant Marine). Marvin served as a in the in the and provided technical assistance with uniforms and weapons to create realistic portrayals of combat, yet bitterly complained about the falsity of some scenes. He thought Reisman's wresting the bayonet from the enraged Posey to be particularly phony. Aldrich replied that the plot was preposterous, and that by the time the audience had left the cinema, they would have been so overwhelmed by action, explosions, and killing, that they would have forgotten the lapses.

Major Reisman was based on John Miara, of , who was a close friend of Lee Marvin, while both served in the during .

was a late inclusion, replacing an actor who quit because he thought the role was beneath him. refused the "Archer Maggot" role, Telly Savalas's character.

The television channel paid homage to the movie in a television commercial "Dirty Dozen on Ice" in which scenes of the movie are shown being played out via an in front of an audience (who are familiar with the story as a 'classic'). Appreciation for the movie is conveyed through the building of the suspense until the audience's desire for Jefferson to achieve his mission is palpable, perhaps hoping he makes it out alive this time. Accolades in the form of flowers are then thrown to the fallen Jefferson.