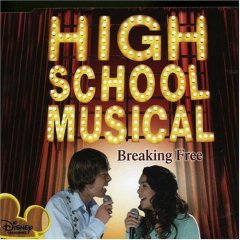 "Breaking Free" is a song from the Disney Channel Original Movie "". It also appears on the soundtrack of the same name. It is sung by (uncredited), [ [http://www.digitalspy.co.uk/article/ds36958.html Digital Spy Interview] "To set the record straight, the majority of what is sung in the movie is definitely sung by someone else. His name is Drew Seeley"] , and . It was also released as a single on . It has been the most successful single from "High School Musical" in the UK, peaking at #9 on the singles chart.

The song is sung during the film's climax when the main characters Troy and Gabriella participate in the callbacks in front of the entire student body.

#"Breaking Free"
#"Start of Something New"
#"Bop to the Top"

In addition to Disney's official Latin American Spanish and Iberian Spanish versions ("Sólo Hay Que Intentar" and "No Dejes de Soñar," respectively) and several variants featured in the Latin American reality spinoff High School Musical: La Selección, a fan adaptation entitled "Nos Liberamos" also exists. Performed by two unnamed employees of an Argentine voice actors company headed by Gonzalo Moreno, this unofficial version is intended to preserve more of the song's original meaning than most of the adaptations endorsed by Disney and also to accommodate fuller enunciation of the lyrics (i.e. elisions such as the rendering of the phrase "Sólo Hay Que Intentar" into "soluayquintentar" are avoided).

American rock group covered a version of "Breaking Free" for the HIGH SCHOOL MUSICAL GOES PUNK compilation on Skunk-Ape Records. The video for the single is available on . “The original song is beautiful and sweet – there’s absolutely nothing wrong with it,” says vocalist, Gene Blalock, “but I think the message of the song – being yourself and breaking free from others’ expectations and demands – gets lost on a wider audience who only hear this pretty duet. Reworking the song makes the message more accessible.” The Faded’s version replaces the duet, with Blalock doing the primary vocals, and members Micheal Diamond and Freddy Maciel offering backing harmony.