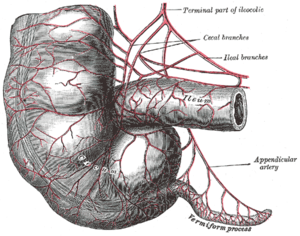 The human vermiform appendix is a vestigial structure; it no longer retains its original function.

Vestigiality describes homologous characters of organisms that have seemingly lost all or most of their original function in a species through evolution. These may take various forms such as anatomical structures, behaviors and biochemical pathways. Some of these disappear early in embryonic development, but others are retained in adulthood. Although the term serves a purpose in many gross phenotypic characteristics, vestigial has probably little applicability to DNA sequences, be they genes or non-coding sequences. Noncoding DNA has become a revealing example for vestigiality. Many types of noncoding DNA sequences have been found to have biological functions. Some sequences, however, have no known biological functions and are often referred to as "Junk DNA".

Vestigial structures are often called vestigial organs, although many of them are not actually organs. These are typically in a degenerate, atrophied, or rudimentary condition,[1] and tend to be much more variable than similar parts. Although structures usually called "vestigial" are largely or entirely functionless, a vestigial structure may retain lesser functions or develop minor new ones.[2] However, care must be taken not to apply the label of vestigiality to exaptation, in which a structure originally used for one purpose is modified for a new one. For example, the wings of penguins would not be vestigial, as they have been modified for a substantial new purpose (underwater locomotion), while Darwin pointed out that those of an emu would be, as they have no major function now.

Vestigial characters range on a continuum from detrimental through neutral to marginally useful. Some may be of some limited utility to an organism but still degenerate over time; the important point is not that they are without utility, but that they do not confer a significant enough advantage in terms of fitness to avoid the random force of disorder that is mutation. It is difficult, however, to say that a vestigial character is detrimental to the organism in the long term — the future is unpredictable, and that which is of no use in the present may develop into something useful in the future. Vestigiality is one of numerous lines of evidence for biological evolution. 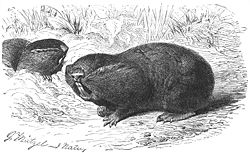 The blind mole rat (Spalax typhlus) has tiny eyes completely covered by a layer of skin.

Vestigial structures have been noticed since ancient times, and the reason for their existence was long speculated upon before Darwinian evolution provided a widely-accepted explanation. In the 4th century BC, Aristotle was one of the earliest writers to comment, in his History of Animals, on the vestigial eyes of moles, calling them "stunted in development".[3] However, only in recent centuries have anatomical vestiges become a subject of serious study. In 1798, Étienne Geoffroy Saint-Hilaire noted on vestigial structures:

His colleague, Jean-Baptiste Lamarck, named a number of vestigial structures in his 1809 book Philosophie Zoologique. Lamarck noted "Olivier's Spalax, which lives underground like the mole, and is apparently exposed to daylight even less than the mole, has altogether lost the use of sight: so that it shows nothing more than vestiges of this organ."[5]

Charles Darwin was familiar with the concept of vestigial structures, though the term for them did not yet exist. He listed a number of them in The Descent of Man, including the muscles of the ear, wisdom teeth, the appendix, the tail bone, body hair, and the semilunar fold in the corner of the eye. Darwin also noted, in On the Origin of Species, that a vestigial structure could be useless for its primary function, but still retain secondary anatomical roles: "An organ serving for two purposes, may become rudimentary or utterly aborted for one, even the more important purpose, and remain perfectly efficient for the other.... [A]n organ may become rudimentary for its proper purpose, and be used for a distinct object."[6]

In the first edition of On the Origin of Species, Darwin briefly mentioned inheritance of acquired characters under the heading "Effects of Use and Disuse", expressing little doubt that use "strengthens and enlarges certain parts, and disuse diminishes them; and that such modifications are inherited".[7] In later editions he expanded his thoughts on this,[8] and in the final chapter of the 6th edition concluded that species have been modified "chiefly through the natural selection of numerous successive, slight, favourable variations; aided in an important manner by the inherited effects of the use and disuse of parts".[9]

In 1893, Robert Wiedersheim published a list of 86 human organs that were, in his words, "formerly of greater physiological significance than at present". Theorizing that they were vestiges of evolution, he called them "vestigial".[10] Since his time, the function of some of these structures has been discovered, while other anatomical vestiges have been unearthed, making the list primarily of interest as a record of the knowledge of human anatomy at the time. Later versions of Wiedersheim's list were expanded to as many as 180 human "vestigial organs". This is why the zoologist Horatio Newman said in a written statement read into evidence in the Scopes Trial that "There are, according to Wiedersheim, no less than 180 vestigial structures in the human body, sufficient to make of a man a veritable walking museum of antiquities."[11]

Vestigial structures are often homologous to structures that are functioning normally in other species. Therefore, vestigial structures can be considered evidence for evolution, the process by which beneficial heritable traits arise in populations over an extended period of time. The existence of vestigial traits can be attributed to changes in the environment and behavior patterns of the organism in question. As the function of the trait is no longer beneficial for survival, the likelihood that future offspring will inherit the "normal" form of it decreases. In some cases the structure becomes detrimental to the organism (for example the eyes of a mole can become infected[6]). In many cases the structure is of no direct harm, yet all structures require extra energy in terms of development, maintenance, and weight, and are also a risk in terms of disease (e.g., infection, cancer), providing some selective pressure for the removal of parts that do not contribute to an organism's fitness. A structure that is not harmful will take longer to be 'phased out' than one that is. However, some vestigial structures may persist due to limitations in development, such that complete loss of the structure could not occur without major alterations of the organism's developmental pattern, and such alterations would likely produce numerous negative side-effects. The toes of many animals such as horses, which stand on a single toe, are still evident in a vestigial form and may become evident, although rarely, from time to time in individuals.

Vestigial traits can still be considered adaptations. This is because an adaptation is often defined as a trait that has been favored by natural selection. Adaptations, therefore, need not be adaptive, as long as they were at some point.[14]

Letter c in the picture indicates the undeveloped hind legs of a baleen whale.

Vestigial characters are present throughout the animal kingdom, and an almost endless list could be given. Darwin said that "[i]t would be impossible to name one of the higher animals in which some part or other is not in a rudimentary condition."[6]

In whales and other cetaceans, one can find small vestigial leg bones deeply buried within the back of the body.[15] These are remnants of their land-living ancestors' legs. All mysticetes have uniquely shaped pelvic bones in the anterior part of their torsos. They are functionally significant structures for the purposes of copulation and defecation. [16]

The wings of ostriches, emus, and other flightless birds are vestigial; they are remnants of their flying ancestors' wings.

The eyes of certain cavefish and salamanders are vestigial, as they no longer allow the organism to see, and are remnants of their ancestors' functional eyes.

Boas and pythons have vestigial pelvis remnants, which are externally visible as two small pelvic spurs on each side of the cloaca. These spurs are sometimes used in copulation, but are not essential, as no colubroid snake (the vast majority of species) possesses these remnants. Furthermore, in most snakes the left lung is greatly reduced or absent. Amphisbaenians, which independently evolved limblessness, also retain vestiges of the pelvis as well as the pectoral girdle, and have lost their right lung.

Crabs have small tails tucked between their rear legs that are probably vestigial, as they are no longer in use. The working version of these tails can be found in their close crustacean relative, the lobster.[citation needed]

Certain species of moths (for example the Gypsy moth) have females that, although flightless, still carry small wings. These wings have no use, and are vestigial to the versions in species whose females can fly.[citation needed]

The fruit fly can be bred in high school experiments to produce offspring with vestigial wings, to better understand basic genetics in biology. 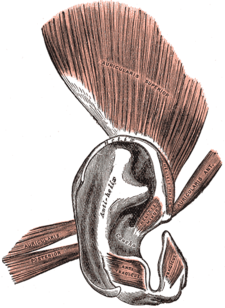 The muscles connected to the ears of a human do not develop enough to have the same mobility allowed to many animals.

Human vestigiality is related to human evolution, and includes a variety of characters occurring in the human species. Many of these are also vestigial in other primates and related animals. The vermiform appendix is a vestige of the cecum, an organ that would have been used to digest cellulose by humans' herbivorous ancestors.[17] Analogous organs in other animals similar to humans continue to perform that function, whereas other meat-eating animals may have similarly diminished appendices. In line with the possibility of vestigial organs developing new functions, some research suggests that the appendix may guard against the loss of symbiotic bacteria that aid in digestion.[18][19] An alternative explanation would be the possibility that natural selection selects for larger appendices because smaller and thinner appendices would be more susceptible to inflammation and disease.[20]

Other structures that still are considered vestigial include the coccyx,[21] or tailbone (a remnant of a lost tail); the plica semilunaris on the inside corner of the eye (a remnant of the nictitating membrane);[22] and, as pictured, muscles in the ear[23] and other parts of the body. Other organic structures (such as the occipitofrontalis muscle) have lost their original functions (keep the head from falling) but are still useful for other purposes (facial expression).[24]

Humans also bear some vestigial behaviors and reflexes. The formation of goose bumps in humans under stress is a vestigial reflex;[25] its function in human ancestors was to raise the body's hair, making the ancestor appear larger and scaring off predators. Raising the hair is also used to trap an extra layer of air, keeping an animal warm. Due to the diminished amount of hair in humans, the reflex formation of goosebumps when cold is now vestigial.[citation needed]

Infants will instinctively grasp any object which touches the palm, in some cases strongly enough to support their own weight.[26] It is speculated that this is because ancestral primates would have had sufficient body hair for an infant to cling to, allowing its mother to escape rapidly from danger, such as by climbing up a tree in the presence of a predator.[citation needed]

There are also vestigial molecular structures in humans, which are no longer in use but may indicate common ancestry with other species. One example of this is L-gulonolactone oxidase, a gene, that is functional in most other mammals, which produces an enzyme that can make vitamin C. A mutation deactivated the gene in an ancestor of the current group of primates, and it now remains in the human genome as a vestigial sequence called a pseudogene.[27]

Plants and other organisms

Plants also have vestigial parts, including functionless stipules and carpels, leaf reduction of Equisetum, paraphyses of Fungi, and many more.[28]