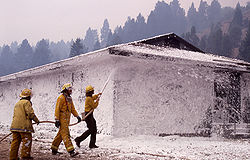 Firefighters sprayed foam on structures in the Mammoth Hot Springs complex on September 10, 1988 during the Yellowstone Fires.

Fire-fighting foam is a foam used for fire suppression. Its role is to cool the fire and to coat the fuel, preventing its contact with oxygen, resulting in suppression of the combustion. Fire-fighting foam was invented by the Russian engineer and chemist Aleksandr Loran in 1902.[1]

The surfactants used must produce foam in concentration of less than 1%. Other components of fire-retardant foams are organic solvents (e.g., trimethyltrimethylene glycol and hexylene glycol), foam stabilizers (e.g., lauryl alcohol), and corrosion inhibitors.

High-expansion foams have an expansion ratio over 200. They are suitable for enclosed spaces such as hangars, where quick filling is needed.

A fire truck demonstrating Class A foam in a CAFS system

Class A foams were developed in mid-1980s for fighting wildfires. Class A foams lower the surface tension of the water, which assists in the wetting and saturation of Class A fuels with water. This aids fire suppression and can prevent reignition.[2] Favorable experiences led to its acceptance for fighting other types of class A fires, including structure fires.[3][dead link]

Aqueous film forming foams (AFFF) are water-based and frequently contain hydrocarbon-based surfactant such as sodium alkyl sulfate, and fluorosurfactant — such as fluorotelomers, perfluorooctanoic acid (PFOA), or perfluorooctanesulfonic acid (PFOS). They have the ability to spread over the surface of hydrocarbon-based liquids.
Alcohol-resistant aqueous film-forming foams (AR-AFFF) are foams resistant to the action of alcohols, able to form a protective film when they are present.

Protein foams contain natural proteins as the foaming agents. Unlike synthetic foams, protein foams are bio-degradable. They flow and spread slower, but provide a foam blanket that is more heat-resistant and more durable.

Protein Foam from non-animal sources is preferred because of the possible threats of biological contaminants like prions.

Every type of foam has its application. High-expansion foams are used when an enclosed space, such as a basement or hangar, must be quickly filled. Low-expansion foams are used on burning spills. AFFF is best for spills of jet fuels, FFFP is better for cases where the burning fuel can form deeper pools, and AR-AFFF is suitable for burning alcohols. The most flexibility is achieved by AR-AFFF or AR-FFFP. AR-AFFF must be used in areas where gasolines are blended with oxygenates, since the alcohols prevent the formation of the film between the FFFP foam and the gasoline, breaking down the foam, rendering the FFFP foam virtually useless.

Water has long been a universal agent for suppressing fires, but is not best in all cases. For example, water is typically ineffective on an oil fire, and can be dangerous. Fire-fighting foams were a positive development in extinguishing oil fires.

In 1902, a method of extinguishing flammable liquid fires by blanketing them with foam was introduced by the Russian engineer and chemist Aleksandr Loran. Loran was a teacher in a school in Baku, which was the main center of the Russian oil industry at that time. Impressed by the terrible and hardly extinguishable oil fires that he had seen there, Loran tried to find such a liquid substance that could deal effectively with the problem. So he invented fire-fighting foam, which was successfully tested in several experiments in 1902-1903.[1] In 1904 Loran patented his invention, and developed the first foam extinguisher the same year.[5]

The original foam was a mixture of two powders and water produced in a foam generator. It was called chemical foam because of the chemical action to create it. In general, the powders used were sodium bicarbonate and aluminium sulfate, with small amounts of saponin or liquorice added to stabilise the bubbles. Hand-held foam extinguishers used the same two chemicals in solution: To actuate the extinguisher, a seal was broken and the unit inverted, allowing the liquids to mix and react. Chemical foam is a stable solution of small bubbles containing carbon dioxide with lower density than oil or water, and exhibits persistence for covering flat surfaces. Because it is lighter than the burning liquid, it flows freely over the liquid surface and extinguishes the fire by a smothering action. Chemical foam is considered obsolete today because of the many containers of powder required, even for small fires.

In the 1940s, Percy Lavon Julian developed an improved type of foam called Aerofoam. Using mechanical action, a liquid protein-based concentrate, made from soy protein, was mixed with water in either a proportioner or an aerating nozzle to form air bubbles with the free-flowing action. Its expansion ratio and ease of handling made it popular. Protein foam is easily contaminated by some flammable liquids, so care should be used so that the foam is applied only above the burning liquid. Protein foam has slow knockdown characteristics, but it is economical for post-fire security.

In the early 1950s, high-expansion foam was conceived by Herbert Eisner in England at the Safety in Mines Research Establishment (now the Health & Safety Laboratory) to fight coal mine fires. Will B. Jamison, a Pennsylvania Mining Engineer, read about the proposed foam in 1952, requested more information about the idea, and proceeded to work with the US Bureau of Mines on the idea, testing 400 formulas until a suitable compound was found. In 1964, Walter Kidde & Company (now Kidde) bought the patents for high expansion foam.[6]

In the 1960s, National Foam, Inc. developed fluoroprotein foam. Its active agent is a fluorinated surfactant that provides an oil-rejecting property to prevent contamination. In general, it is better than protein foam because its longer blanket life provides better safety when entry is required for rescue. Fluoroprotein foam has fast knockdown characteristics and it can also be used together with dry chemicals that destroy protein foam.

In the mid-1960s, the US Navy developed aqueous film-forming foam (AFFF) . This synthetic foam has a low viscosity and spreads rapidly across the surface of most hydrocarbon fuels. A water film forms beneath the foam, which cools the liquid fuel, which stops the formation of flammable vapors. This provides dramatic fire knockdown, an important factor in crash rescue fire fighting.

In the early 1970s, National Foam, Inc. invented Alcohol-Resistant AFFF technology. AR-AFFF is a synthetic foam developed for both hydrocarbon and polar-solvent materials. Polar solvents are combustible liquids that destroy conventional fire-fighting foam. These solvents extract the water contained in the foam, breaking down the foam blanket. Therefore, these fuels require an alcohol- or polar-solvent-resistant foam. Alcohol-resistant foam must be bounced off of a surface and allowed to flow down and over the liquid to form its membrane, compared to standard AFFF that can be sprayed directly onto the fire.