"Dulcinea del Toboso" (real name Aldonza Lorenzo) is a fictional character who is referred to (but does not appear) in Miguel de Cervantes' novel Don Quixote. Seeking the traditions of the knights-errant of old, Don Quixote finds a true love whom he calls Dulcinea. She is a simple peasant in his home town, but Quixote imagines her to be the most beautiful of all women. At times, Quixote goes into detail about her appearance, though he freely admits that he has seen her only fleetingly and has never spoken with her.

Don Quixote describes her appearance in the following terms: "... her name is Dulcinea, her country El Toboso, a village of La Mancha, her rank must be at least that of a princess, since she is my queen and lady, and her beauty superhuman, since all the impossible and fanciful attributes of beauty which the poets apply to their ladies are verified in her; for her hairs are gold, her forehead Elysian fields, her eyebrows rainbows, her eyes suns, her cheeks roses, her lips coral, her teeth pearls, her neck alabaster, her bosom marble, her hands ivory, her fairness snow, and what modesty conceals from sight such, I think and imagine, as rational reflection can only extol, not compare." [Volume 1/Chapter XIII] 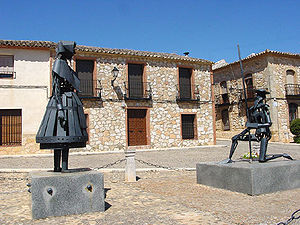 In the Spanish of the time, Dulcinea means something akin to an overly elegant "sweetness". In this way, Dulcinea is an entirely fictional person for whom Quixote relentlessly fights. To this day, a reference to someone as one's "Dulcinea" implies hopeless devotion and love for her, and particularly unrequited love.

She does appear in many stage and film adaptations of the book. In cinema and on stage, she has been played by (among others) Sophia Loren, Joan Diener, Rosemary Leach, Hollis Resnik, and Vanessa Williams. In the Broadway musical Man of La Mancha, she is a self-described whore. Her given name is Aldonza, and a prominent arc of the musical follows her distrust and then fervent belief in Don Quixote's quest. She begins as someone who has no self-worth, Aldonza, and through Quixote's belief in her, she begins to believe in herself as someone of great worth and takes on the name Dulcinea.[1] In the stage version (but not in the 1972 film), the local priest sings a song called "To Each His Dulcinea", in which he reflects that although Dulcinea does not exist, the idea of her is what keeps Don Quixote alive and on his quest.

The Jules Massenet opera Don Quichotte depicts Dulcinée as a major character, the local queen who sends the knight on a quest to retrieve her jewels.