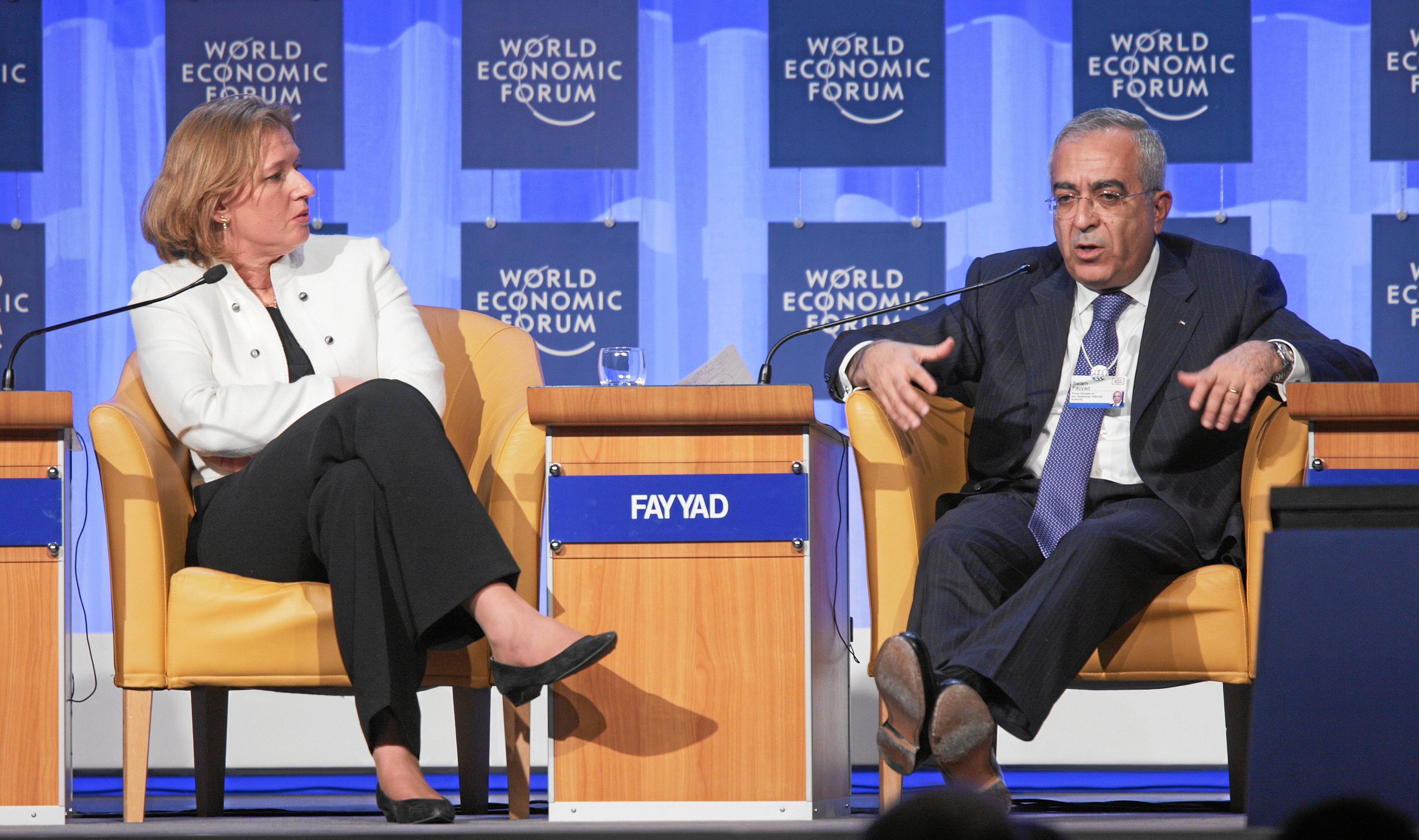 caption = Fayyad with Israeli Foreign Minister at the in , 2008
order = Prime Minister of Palestine
president =
term_start =
term_end =
predecessor =
successor =
birth_date = 1952
birth_place = ,
party = Third WayDr Salam Fayyad ( _ar. سلام فياض; b. 1952) is a politician, who on , , was appointed the . His appointment, justified by President on the basis of "national emergency", has not been confirmed by the (PLC), the parliament of the (PNA). [cite news
title = Abbas suspends articles from Basic Law
publisher = Kuwait News Agency
date =
url = http://www.kuna.net.kw/NewsAgenciesPublicSite/ArticleDetails.aspx?id=1755378&Language=en] [cite news |last1=Kershner |first1=Isabel |last2=El-Khodary |first2=Taghreed |coauthors=Ian Fisher, Nada Bakri, Warren Hoge |title=Abbas Swears in Emergency Government |publisher=New York Times |date=] Until that date, Fayyad had been the in the interim government from 2002.

Fayyad is an internationally respected economist and politician. [ [http://72.14.253.104/search?q=cache:llBXsZRc68kJ:www.sacbee.com/830/story/228189.html+salam+fayyad+respected&hl=en&ct=clnk&cd=3&gl=us&client=firefox-a EU backs new Palestinian government] Sacramento Bee, June 18, 2007] [ [http://news.bbc.co.uk/2/hi/middle_east/6757273.stm Profile: Salam Fayyad] . BBC News, 17 June 2007] Salam Fayyad received his MBA from in 1980. [ [http://www.academic-search.com/PDFs/Profiles/SEUProfile.pdf 1980 MBA Graduate of St. Edwards University] ] Dr. Fayyad has a in from the , where he was a student of and where he did early research on the American , which he continued on the staff of the . Fayyad began his career teaching economics at in , before joining the from 1987 - 1995. He subsequently became the representative to the Palestinian National Authority until 2001, before becoming its Finance Minister.

Upon resigning as Finance Minister, Fayyad ran as founder and leader of the new Third Way political party in the Palestinian legislative election of 2006 alongside and [ [http://www.csmonitor.com/2005/1213/p06s02-wome.html Palestinian third way rises] ] . Fayyad and Ashrawi won seats in the PLC.

He is seen as pro-Western and was predicted to be offered the post of Prime Minister of the PNA by both Fatah, and as of , , also by the winner of the elections: the List of Change and Reform (). In response to the offer, Fayyad presented several conditions to becoming Prime Minister, including that Hamas would recognize , which Hamas declined.

On , , Fayyad was appointed Finance Minister of the Fatah-Hamas unity government. [http://www.aljazeerah.info/News%20archives/2007%20News%20Archives/March/17%20n/EU%20Allows%20Contacts%20with%20Non-Hamas%20Ministers%20and%20Invites%20Fayyad%20to%20Brussels%20for%20Aids.htm] On , , following the Hamas takeover of the Gaza Strip, Fayyad was appointed Prime Minister of a new "independent" government (without any Fatah or Hamas members) which is effectively supported by the Fatah and Israel.

This appointment has been challenged as illegal, because while the permits the President of the PNA to dismiss a sitting prime minister, the appointment of a replacement requires the approval of the PLC. The law provides that after removal of the Prime Minister (in this case, ), the outgoing prime minister heads a caretaker government. The current PLC, in which Hamas holds a majority of seats, has not approved the appointments of Fayyad or the balance of his new government. Fayyad's appointment was never placed before, or approved by the PLC. [ [http://electronicintifada.net/v2/article7038.shtml Whose Coup Exactly?] , The , June, 18, 2007] . Haniyeh has continued to operate as Prime Minister in Gaza, and is recognized by a large number of Palestinians as the legitimate caretaker Prime Minister of the PNA. , the Palestinian constitutional lawyer who drafted the Basic Law, is among those who publicly declared the appointment of Fayyad to be illegal. [ [http://wap.alertnet.org/thenews/newsdesk/L0880166.htm Opinion of lawyer who drafted Palestinian law] , Reuters, July 8, 2007. Accessed August 7, 2007] .

* [http://www.jpost.com/servlet/Satellite?cid=1137605926045&pagename=JPost%2FJPArticle%2FShowFull Hamas promises major changes in PLC] : "Some Palestinians predicted that Hamas might ask former finance minister Salam Fayyad to head the new cabinet, so as to avoid a boycott by the international community." &mdash; "", (, )
* [http://www.haaretz.com/hasen/spages/842272.html Salam Fayyad: Everyone's favorite Palestinian] : This article provides much relevant background. &mdash; "", (, )
* [http://www.palestinianbasiclaw.org/ A selection of links and news about the Palestinian Basic Law]