Exchangeable image file format
This article is about a format for storing metadata in image and audio files. For information about filename and directory structures of digital cameras, see Design rule for Camera File system.

Exchangeable image file format (Exif) is a standard that specifies the formats for images, sound, and ancillary tags used by digital cameras (including smartphones), scanners and other systems handling image and sound files recorded by digital cameras. The specification uses the following existing file formats with the addition of specific metadata tags: JPEG DCT for compressed image files, TIFF Rev. 6.0 (RGB or YCbCr) for uncompressed image files, and RIFF WAV for audio files (Linear PCM or ITU-T G.711 μ-Law PCM for uncompressed audio data, and IMA-ADPCM for compressed audio data).[1] It is not supported in JPEG 2000, PNG, or GIF.

Exif was created by the Japan Electronic Industries Development Association (JEIDA). Version 2.1 of the specification is dated June 12, 1998, and the latest, version 2.3 dated April 2010, was jointly formulated by JEITA and CIPA. Though the specification is not currently maintained by any industry or standards organization, its use by camera manufacturers is nearly universal.

The metadata tags defined in the Exif standard cover a broad spectrum:

The Exif tag structure is borrowed from TIFF files. On several image specific properties, there is a large overlap between the tags defined in the TIFF, Exif, TIFF/EP, and DCF standards. For descriptive metadata, there is an overlap between Exif and IPTC Information Interchange Model info, which also can be embedded in a JPEG file.

When Exif is employed for JPEG files, the Exif data are stored in one of JPEG's defined utility Application Segments, the APP1 (segment marker 0xFFE1), which in effect holds an entire TIFF file within. When Exif is employed in TIFF files (also when used as "an embedded TIFF file" mentioned earlier), the TIFF Private Tag 0x8769 defines a sub-Image File Directory (IFD) that holds the Exif specified TIFF Tags. In addition, Exif also defines a Global Positioning System sub-IFD using the TIFF Private Tag 0x8825, holding location information, and an "Interoperability IFD" specified within the Exif sub-IFD, using the Exif tag 0xA005.

Formats specified in Exif standard are defined as folder structures that are based on Exif-JPEG and recording formats for memory. When these formats are used as Exif/DCF files together with the DCF specification (for better interoperability among devices of different types), their scope shall cover devices, recording media, and application software that handle them.

The Exif format has standard tags for location information. Currently, a few cameras and a growing number of mobile phones have a built-in GPS receiver that stores the location information in the Exif header when the picture is taken. Some other cameras have a separate GPS receiver that fits into the flash connector or hot shoe. Recorded GPS data can also be added to any digital photograph on a computer, either by correlating the time stamps of the photographs with a GPS record from a hand-held GPS receiver or manually using a map or mapping software. The process of adding geographic information to a photograph is known as geocoding. Photo sharing communities like Panoramio, locr or Flickr equally allow their users to upload geocoded pictures or to add geolocation information online.

Most of Nokia's Nseries mobile phones (such as the N95) are equipped with a GPS receiver, and using Location Tagger,[2] a piece of software from Nokia Beta Labs. All captured images are tagged with corresponding GPS coordinates when a GPS signal is available. The second generation of iPhone (known as the iPhone 3G) by Apple Inc. is also equipped with a GPS receiver, and uses the receiver to geotag photographs taken with the device. Subsequent generations (the iPhone 3GS, 4 & 4S) also support this feature. The first generation iPhone is not equipped with GPS, and uses a service provided by Skyhook to triangulate and approximate the location at which the picture was taken using nearby cellular phone towers and WiFi hot-spot signal strength data. The Skyhook service provides approximate GPS location information which is then added to the Exif data associated with the picture. Also mobile phones with the Android operating system as well as BlackBerry smartphones with a camera and builtin GPS or Bluetooth GPS addons can geotag images with the included camera application.

Exif data are embedded within the image file itself. While many recent image manipulation programs recognize and preserve Exif data when writing to a modified image, this is not the case for most older programs. Many image gallery programs also recognise Exif data and optionally display it alongside the images.

Software libraries, such as libexif[3] for C and Exiv2[4] for C++, Metadata Extractor[5] for Java, or Image::ExifTool[6] for Perl, parse Exif data from files and read/write Exif tag values.

Apart from not being a maintained standard, the Exif format has a number of drawbacks, mostly relating to its use of legacy file structures.

Metadata Working Group was formed by a consortium of companies in 2006 (according to their web page) or 2007 (as stated in their own press release). It released its first document on 24 September 2008,[11] giving recommendations concerning the use of Exif, IPTC and XMP metadata in images.

Extensible Metadata Platform (XMP) was created by Adobe Systems to be a better metadata format for photography and image processing. However, it is generally unsupported in cameras.

In the original release of Windows XP, a subset of the Exif information may be viewed by right clicking on an image file and clicking properties; from the properties dialog click the Summary tab and then the Advanced button. However, this can damage certain Exif headers if changes are applied.[12] As of the release of Service Pack 3, Windows XP still shows evidence of corrupting Exif tags when modifying JPG file properties via the file properties window.[13]

On Mac OS X 10.4 and above, this information may be viewed in the Finder by doing Get Info on a file and expanding the More Info section.

On Unix systems using the GNOME desktop environment, a subset of Exif data can be seen by right clicking the file in the Nautilus file manager and selecting properties. In KDE, it can be seen by right clicking in the Dolphin file manager, selecting "Properties" and then "Information".[citation needed] It is also possible to view and edit Exif data in digiKam photo management program.[14] Most Unix image viewers give the full set of Exif data.

There are many software tools available which allow both viewing and editing of Exif data. The Opanda IExif Viewer is a free stand-alone application for viewing Exif data and also a plug-in for Internet Explorer and Firefox on Windows platforms. EXIFeditor is another free application that allows editing of EXIF information. It allows examination of detailed Exif data online by right clicking on an image.[15] FxIF and Exif Viewer are multi-platform extensions for Firefox that display Exif data in the image properties dialog. This feature is native in the web browser Opera, under image properties.

Retrieval of detailed Exif data not usually displayed by other programs can be accomplished using ExifTool which runs in Perl, and is available for all platforms.

For AmigaOS/MorphOS, SView5 as well as .NET covers a lot of the previously mentioned functionality.

To deal with the privacy problems that Exif may pose to those who share their photographs with others, specialized metadata removal tools which can remove Exif exist.[16] 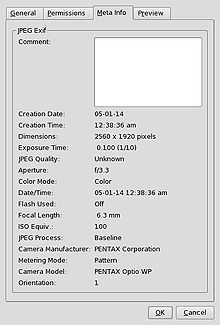 The following table shows Exif data for a photo made with a typical digital camera. Notice that authorship and copyright information is generally not provided in the camera's output, so it must be filled in during later stages of processing.

The Exif specification describes the RIFF file format used for WAV audio files, and defines a number of tags for storing meta information such as artist, copyright, creation date, and more in these files.[20] The following table gives an example of Exif information found in a WAV file written by the Pentax Optio WP digital camera:

The 'MakerNote' tag contains image information normally in a proprietary binary format. Some of these manufacturer-specific formats have been decoded: