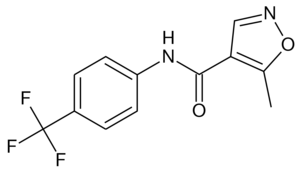 Leflunomide is a medication of the type, used in active moderate to severe and . It is a .

Leflunomide is a pyrimidine synthesis inhibitor belonging to the (disease-modifying antirheumatic drug) class of drugs, which are chemically and pharmacologically very heterogeneous.

The substance is sold under the brand name by . It is available for oral administration as tablets containing 10, 20, or 100 mg of active drug. Arava also contains some inactive ingredients, which could cause allergies or intolerances. Arava was approved by and in many other countries (e.g., Canada, Europe) in 1998.

Arava tablets are 80% bioavailable. Co-administration with a high fat meal did not have a significant impact on plasma levels of the active metabolite . Following oral administration, leflunomide is metabolized to teriflunomide which is responsible for essentially all of the drug's activity in vivo. Studies of the pharmacokinetics of leflunomide have primarily examined the plasma concentrations of teriflunomide. Plasma levels of unchanged leflunomide are occasionally detected, but at very low levels. Some minor metabolites have been noticed to occur in human plasma, which do not account for the beneficial drug effects. Teriflunomide is metabolized in the liver at cytosolic and microsomal sites and further excreted as well renally and billary.

After oral administration, peak plasma levels of teriflunomide occurred between 6 - 12 hours after dosing. Due to its very long half-life (approximately 2 weeks), a loading dose of 100 mg for 3 days was used in clinical studies to reach steady-state levels quickly. Without a loading dose, it is estimated that steady-state plasma concentrations would require nearly two months of dosing to be reached. The resulting plasma levels following both loading doses and continued clinical dosing indicate that plasma levels are dose proportional. Teriflunomide can be found as late as 2 years after termination of therapy in human plasma in sufficient levels to cause severe harm to pregnant women or to cause significant interactions. If quick removal from the body is necessary, an eleven day scheme with or the use of is indicated and will soon decrease plasma levels below the critical limit of 0.02mg/l. Limited experience shows that teriflunomide is not dialysable.

In the US Arava is indicated in adults for the treatment of active moderate to severe rheumatoid arthritis and psoriasis arthritis
* to reduce signs and symptoms
* to inhibit structural damage as evidenced by X-ray erosions and joint space narrowing
* to improve physical function.

The onset of clinical improvement can be expected after 4 to 6 weeks of continued therapy.

Aspirin, or other nonsteroidal anti-inflammatory agents (NSAR), and/or low dose corticosteroids may be continued during treatment with leflunomide. The combined use of leflunomide with antimalarials, intramuscular or oral , , , or has not been adequately studied and is therefore contraindicated.

Especially the concomitant use of methotrexate may lead to severe or even fatal liver- or hepatotoxicity. Seventy five per cent of all cases of severe liver damage reported until early 2001 were seen under combined drug therapy Arava plus methotrexate.

Prescribers are reminded that Arava should only be prescribed by specialists experienced in the treatment of rheumatic diseases.

Leflunomide has recently been assigned status for the prevention of solid organ rejection after transplantations when co-administered with commonly used first line agents (USA only). Most experience exists with liver and renal transplations. The efficacy and safety of leflunomide has not been completely assessed so far in well controlled and adequate studies.

Clinical studies regarding the following diseases have been conducted, but these have to be reviewed critically, before approval can be given:

One study has been made in pediatric patients with (JRA). In these patient group clinical efficacy, side-effect profile, and pharmacokinetic data have been comparable to adult patients with rheumatoid arthritis on Arava alone. The results, however, have been somewhat inferior to the active control group, possibly reflecting a relative underdosing in the lower age of patients group. So far JRA is not an approved indication for Arava.

Leflunomide has also been utilized for the treatment of Relapsing Polychondritis, but only case reports exist in the literature regarding this usage.fact|date=February 2007

Leflunomide has a great number of absolute and relative contraindications, in part associated with its mode of action:

* to the drug or to inactive ingredients (e.g., lactose).

* Important contraindications are preexisting pregnancy, or women of childbearing potential not using reliable anticonceptive methods. Finally, women should not become pregnant before 2 years after termination of therapy have elapsed or undergo a rapid wash-out procedure as stated above. Men wishing to father a child should discontinue leflunomide after consultation with their prescribing physician and also undergo the wash-out procedure.

* Preexisting significant liver or renal disease and moderate to severe diseases of the bone marrow or immune system preclude the use of Leflunomide.

* Combination with methotrexate, other DMARDs and alcohol.

Due to its potent immunosuppression, leflunomide has the potential to promote myeloid/lymphatic malignancies or solid cancers. In postmarketing reports some cases of have been noticed, the absolute number of cases and the case/patient ratio is unknown. In rheumatoid arthritis patients a several-fold increase of lymphoma is already found in those patients not treated with any DMARD.

The side-effects of Arava affect quite a number of organ systems, are frequent and at times severe or even fatal.

* Most serious is symptomatic liver damage ranging from jaundice to hepatitis, which can be fulminant, severe liver necrosis, and liver cirrhosis. Fatalities are known. Liver function studies may or may not precede the outbreak of clinical disease. The total incidence of severe liver damage is estimated to be as high as 0.5%, according to an internal report of the . The , the European pendant to FDA, has in 2001 reported 296 cases of hepatotoxicity in 104,000 patient years, with 129 considered as serious, 2 cases of liver cirrhosis, and 15 cases of liver failure. Nine of the patients died. EMEA findings are that liver damage is typically seen within the first 6 months of therapy and is partially depending on cofactors, because of the serious cases 101 (78%) were concomitantly treated with other hepatotoxic drugs; 58% of those with asymptomatic elevations of liver function studies were cotreated with certain NSARs and/or methotrexate (see contraindications). In addition, 33% (=27 patients) of the patients with serious damage had other risk factors (history of alcohol abuse, liver function disturbance, acute heart failure, severe pulmonary disease or pancreatic carcinoma). Analysis of the data suggested that monitoring of liver function studies and wash-out periods may have not been fully adhered to. In case of any question, please refer to the procedures suggested in the EMEA statement as listed in section external links and references.

* Also very important is a relatively high incidence of with , and/or hypoplastic , and/or . Infections, sometimes as severe as development of active , , , and severe viral or mycotical infections, possibly leading to sepsis, death or permanent damage have been seen. Anemia or bleeding episodes may also lead to serious complications.

* may occasionally be noticed and is recognized by progressive and typical X-ray findings. This disease may or may not be reversible upon treatment and may lead to permanent disability or death.

* Other sites are: GIT, reactions up to life-threatening forms ( and , heart problems, alopecia (17%), CNS troubles etc.

If severe side-effects are encountered, teriflunomide can be readily removed from the body with oral cholestyramine or activated charcoal (see above) to slow or reverse the noted side-effects.

* Alcohol, other DMARDs including /, live virus , , some tuberculostatics ( and/or ), and should not be given concomitantly.

* Hematologic MonitoringPatients taking Arava should have count, count, and or monitored before initiation of treatment (baseline values), monthly for six months following initiation of therapy, and every 6 to 8 weeks thereafter.

* Bone Marrow Suppression Monitoring for Combination Therapy with ImmunosuppressantsIf used concomitantly with such as methotrexate, chronic monitoring should be monthly.

* Liver Enzyme Monitoring
ALT () values must be obtained at baseline and monitored at monthly intervals during the first six months then, if stable, every 6 to 8 weeks thereafter. In addition, if leflunomide and methotrexate are given concomitantly, ACR guidelines for monitoring methotrexate liver toxicity must be followed with ALT, , and serum albumin testing every month.

Patients should be carefully informed as to report immediately any subjective early signs of liver damage, bone marrow damage, serious infection, life-threatening skin reactions, and interstitial lung disease to their physician. This is particular important for the interval between laboratory examinations.

Arava is a potent drug comparing favourably with other DMARDs regarding the efficacy as measured by improvements on the ACR scale. Leflunomide met the ACR20 criteria in up to 56% of patients; most other drugs (e.g., methotrexate alone, , -inhibitors, , the latter drugs also in combination with methotrexate) reach values from 20% only up to approximately 50%. Arava was withdrawn in clinical studies in 36% of patients due to different reasons (intolerable side-effects, lack of efficacy, unspecified reasons); the incidence was not higher than observed in the methotrexate control group. However, postmarketing data regarding the high incidence of severe liver damage, serious myelosuppression, profound immunosuppression leading to serious or even fatal infections, the possibility that Arava is a human , and the occurrence of interstitial lung disease has led to the forming of patient groups in the USA and Europe, for example, supported by safety aware physicians. These groups call for the local or worldwide ban or discontinuation of Arava.