The Watford DC Line is a commuter railway line from London Euston to Watford Junction. Services on the line are operated by London Overground. The line runs beside the West Coast Main Line (WCML) for most of its length. The London Underground Bakerloo line shares the track of the line from Queen's Park to Harrow & Wealdstone. The London Overground rolling stock used on the line is Class 378 "Capitalstar".

The line is electrified with direct current, hence its name in contrast to the overhead alternating current of the adjacent WCML.

Services on this line began when London and North Western Railway (LNWR) completed the Camden to Watford Junction New Line in 1922, to provide additional suburban capacity and more outer-suburban services running non-stop to Euston. It incorporated part of the LNWR Rickmansworth branch (formerly the Watford and Rickmansworth Railway) between Watford Junction and Watford High Street Junction and part of the original Slow Main Line between Queen's Park and South Hampstead stations; two single-track tunnels take the line from South Hampstead to Camden, whence the line reaches Euston station by the main line tracks. Prior to 1922, at which time the entire route was finally electrified, services were steam operated. Although the operation of the line is mostly self-contained, connections at Watford Junction and Camden allow other trains on to it, a facility used occasionally with trains diverted from the West Coast Main Line should an alternative diversionary route be not available.

The line opened with conventional semaphore signalling mechanically operated from signal boxes at each station; this system remained in use after electrification.
The London, Midland and Scottish Railway introduced an automatic electric signalling system in the early 1930s over most of the route and some signal boxes were abolished. A similar system was also used for a shorter period between Bromley-by-Bow and Upminster now part of the District line. The very closely spaced mix of automatic and semi-automatic signals, repeater signals, and auxiliary calling-on aspects was intended to let trains to proceed, after a set delay, at low speed past "failed" signals on track with no junctions without the need to contact a signalman, but this could lead to a nose-to-tail queue of trains as they all reached the location of a real line blockage.

Train stops were provided (except at repeater signals) to allow LER trains to operate over the line without the special provision of a second man; this enabled the same practice to be continued with all other Underground and main line stock subsequently allocated to this line and which was provided with trip equipment.

Signal boxes remaining in use in the early 1970s included:

Normally Kilburn High Road and Stonebridge Power House which controlled only plain track with crossovers were switched out and only Queens Park, Willesden and Harrow boxes were staffed for at least part of the day, to deal with junction and siding traffic. In the early 1980s manual control of signalling was needed for a few months after dragging gear on a train destroyed many electric train-stops which were of a design almost confined to this line (LU train-stops are mostly electro-pneumatic). By this time the signal boxes at Stonebridge Power House and Kilburn High Road had been abolished. Emergency crossovers at other locations were controlled by ground frames enclosed in structures the size of a garden shed.

In 1988 the LMS system was replaced by a more standard system controlled from a new signal box, Willesden Suburban, and the remaining local boxes were abolished. The new system had solid state interlocking, but far fewer signals; as a consequence the maximum traffic capacity of the line was severely reduced. In the early 1960s there were headways of less than 2 minutes between Harrow & Wealdstone and Willesden Junction stations, the section of line used by nearly all services. An Oerlikon electric train at Harrow and Wealdstone (1956)

The original electrification was on a fourth rail system, similar to that now used by London Underground, which allowed LER trains to use the New Line. Power was supplied from the railway's own power station at Stonebridge Park until the 1960s when it was closed, after which it has been obtained from public supplies. As originally installed, there was provision for interconnection of the high voltage section of the power station to adjacent public supplies for output or intake but this ceased when national supplies were standardised at 50Hz. This power station was used for both internal and external scenes in an early episode of the BBC series Doctor Who in which the building can be seen substantially as it was at the time of closure but after the wooden cooling towers had been removed.[citation needed]

In the 1970s, the track and the rolling stock used on this line and the North London Line were changed to use a modified version of the BR standard third rail system, with the fourth rail (now bonded to the running rail used for returning traction current) left in place on the sections of line shared with LU Bakerloo Line trains. North of Harrow & Wealdstone, now the limit of LU operation, the fourth rail has in most places been dropped on to the sleepers and remains bonded, thus leaving the resistance of the current return path unaltered The fourth rail remains in the normal position from Queens Park to Kilburn High Road Up platform, where a trailing crossover between those two stations is maintained in use to allow reversal of Bakerloo Line trains unable to gain access to London Underground at Queens Park, due to planned work or other reasons. The line is currently electrified at 600 volts DC which provides reasonable compatibility with the 630 volt Bakerloo line stock.

A consequence of converting to third rail with the fourth rail provided only for LU use was that both planned and emergency use of the line by other 3-rail-capable trains was possible. Ignoring recent use of class 508 trains, this last took place when class 416 trains were diverted to Willesden Junction Low Level station when part of the North London Line was closed for a number of weeks in the late 1980s.

The construction of a curve to link Rickmansworth (Church Street) to the Euston main line was planned. A new line would have then run south to Wembley, then passed under the main line and run on the east side to Euston, terminating in a loop.[citation needed]

The loop was dropped on grounds of cost and, instead, services terminated at Euston main platforms or ran on the North London Railway to Broad Street. Pressure from local groups led to the building of a curve near Bushey, diverting the main route for new services over the existing branch line north to Watford Junction instead of south to Rickmansworth. In 1917 LER Bakerloo Line services were extended over the New Line from Queen's Park station to Watford Junction.

Bakerloo Line services were cut back in stages and ceased north of Stonebridge Park station in 1982; in 1984 they were restored as far as Harrow and Wealdstone.

The Croxley Green branch fell into disuse in the 1990s, and is now derelict. It is planned to divert the Metropolitan Line over the branch and on to Watford Junction (for more information see Croxley Rail Link). Some clearance or preparatory work has been reported [1] as having occurred in late 2006.

In November 2007 Transport for London (TfL) took full management control of all the intermediate Watford DC Line stations as part of the London Overground (LO) service with staffing during opening hours, automatic ticket gates and planned station refurbishment to the standard of the Tube network. 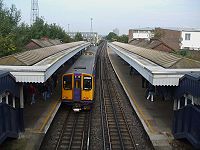 An Overground train calls at Harlesden The line is also shared with London Underground

The local passenger services which over the DC line are:

London Midland also run a fast service from Watford direct to London Euston along the West Coast Mainline (which runs parallel to the Watford DC Line), usually calling at Bushey and Harrow & Wealdstone before running non-stop to Euston. The service offers a quicker alternative to the all-stations London Overground service, especially as the operator now accepts TfL's Oystercard ticketing. At Watford Junction, Watford - Euston services are advertised as terminating at South Hampstead, in order to persuade passengers for Euston to take the frequent faster services. The opposite does not apply at Euston.

When the south curve of the triangular junction between Watford High Street and Bushey existed, a few trains used Croxley depot (now demolished), which was shared by LU and BR trains. This map depicts what the London Overground network will look like if the Bakerloo Line is extended to Watford Junction. The Watford line of the Overground would be discontinued.[2].

It is proposed that the Bakerloo Line will be re-extended to Watford Junction by 2030. If this happens, the Overground services north of Kilburn will probably be terminated.

The Autumn 2006 document from TfL, "A Rail Strategy for London's Future", said that the plan was eventually to transfer the Watford DC Line north of Harrow & Wealdstone back to the Bakerloo Line,[3] effectively ending the Watford DC Line. The London Overground service may then operate from Queen's Park to Primrose Hill Junction, serving South Hampstead and Kilburn High Road; from there using the currently freight-only line to Camden Road (potentially leading to the re-opening of the disused Primrose Hill station for interchange with Chalk Farm on the Northern line); and onwards to Stratford via the North London Line.[4] However, this will mean losing a direct link from the Bakerloo Line's main railway to Euston station, as DC trains would be withdrawn between Primrose Hill Junction and Euston.

A date has not yet been specified for this change; prospective tube maps illustrating the future of London Overground and Underground services continue to show the Watford line as part of the Overground network in 2010.[5] Another proposal to bring London Underground service to Watford Junction is the Croxley Rail Link, which envisages diverting the Watford branch of the Metropolitan Line along a re-opened stretch of track to the west of Watford, effectively reinstating the former Croxley Green to Watford Junction service. Underground trains would then join the DC line at Watford High Street, potentially forming an interchange either with London Overground or the Bakerloo line, depending on the outcome of other projects.