Aldehyde dehydrogenase
Not to be confused with aldehyde oxidase.

Aldehyde dehydrogenases (EC 1.2.1.3) are a group of enzymes that catalyse the oxidation (dehydrogenation) of aldehydes.

Aldehyde dehydrogenase is a polymorphic enzyme[2] responsible for the oxidation of aldehydes to carboxylic acids, which leave the liver and are metabolized by the body’s muscle and heart.[2] There are three different classes of these enzymes in mammals: class 1 (low Km, cytosolic), class 2 (low Km, mitochondrial), and class 3 (high Km, such as those expressed in tumors, stomach, and cornea). In all three classes, constitutive and inducible forms exist. ALDH1 and ALDH2 are the most important enzymes for aldehyde oxidation, and both are tetrameric enzymes composed of 54kDA subunits. These enzymes are found in many tissues of the body but are at the highest concentration in the liver.[2]

The active site of the aldehyde dehydrogenase enzyme is largely conserved throughout the different classes of the enzyme and, although the number of amino acids present in a subunit can change, the overall function of the site changes little. The active site binds to one molecule of an aldehyde and an NAD(P)+ that functions as a cofactor. A cysteine and a glutamate will interact with the aldehyde substrate. Many other residues will interact with the NAD(P)+ to hold it in place. A magnesium may be used to help the enzyme function, although the amount it helps the enzyme can vary between different classes of aldehydes.

The overall reaction catalysed by the aldehyde dehydrogenases is:

A sulfur from a cysteine in the active site makes a nucleophilic attack on the carbonyl carbon of the aldehyde. The hydrogen is kicked off as a hydride and attacks NAD(P)+ to make NAD(P)H. The enzyme's active site then goes through an isomorphic change whereby the NAD(P)H is moved, creating room for a water molecule to access the substrate. The water is primed by a glutamate in the active site, and the water makes a nucleophilic attack on the carbonyl carbon, kicking off the sulfur as a leaving group. 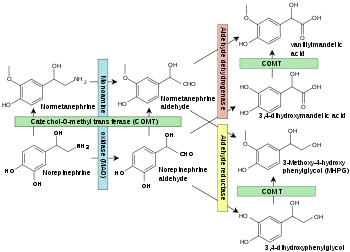 ALDH2 plays a crucial role in maintaining low blood levels of acetaldehyde during alcohol oxidation. In this pathway, the intermediate structures can be toxic, and health problems arise when those intermediates cannot be cleared.[2] When high levels of acetaldehyde occur in the blood, facial flushing, light headedness, palpitations, nausea, and general “hangover” symptoms occur. These symptoms are indicative of a disease known as “Asian Flush” or “Oriental Flushing Syndrome”.[5]

There is a mutant form of aldehyde dehydrogenase, termed ALDH2*2, wherein a lysine residue replaces a glutamate in the active site at position 487 of ALDH2.[6] Homozygous individuals with the mutant allele have almost no ALDH2 activity, and those heterozygous for the mutation have reduced activity. Thus, the mutation is partially dominant.[2] The ineffective homozygous allele works at a rate of about 8% of the normal allele, for it shows a higher km for NAD+ and has a higher maximum velocity than the wild-type allele.[2] This mutation is common in Japan, where 41% of a non-alcoholic control group were ALDH2 deficient, where only 2-5% of an alcoholic group were ALDH2-deficient. In Taiwan, the numbers are similar, with 30% of the control group showing the deficiency and 6% of alcoholics displaying it.[2] The deficiency is manifested by slow acetaldehyde removal, with low alcohol tolerance perhaps leading to a lower frequency of alcoholism.[5][2]

These symptoms are the same as those observed in people who drink while being treated by the drug disulfiram, which is why it is used to treat alcoholism. The patients show higher blood levels of acetaldehyde, and become violently ill upon consumption of even small amounts of alcohol.[2] Several drugs (e.g., metronidazole) cause a similar reaction known as "disulfiram-like reaction."

Yokoyama et al. found that decreased enzyme activity of aldehyde dehydrogenase-2, caused by the mutated ALDH2 allele, contributes to a higher chance of esophageal and oropharyngolaryngeal cancers. The metabolized acetaldehyde in the blood, which is six times higher than in individuals without the mutation, has shown to be a carcinogen in lab animals. ALDH2*2 is associated with increased odds of oropharyngolaryngeal, esophageal, gastric, colon, and lung cancer. However, they found no connection between increased levels of ALDH2*2 in the blood and an increased risk of liver cancer.[7]