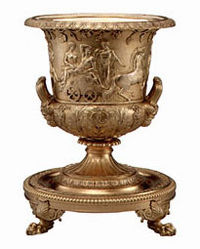 A vermeil wine cooler manufactured in 1810 by Paul Storr is located in the Vermeil Room of the White House.

Vermeil (pronounced /ˈvɜrmɪl/ or /vərˈmeɪ/; French: [vɛʁˈmɛj]) is a combination of sterling silver, gold, and other precious metals, commonly used as a component in jewelry. A typical example is sterling silver coated with 14 carat (58%) gold. To be considered vermeil, the gold must be at least 10 carat (42%) and be at least 2.5 micrometres thick. In the US, sterling silver covered with a base metal (such as nickel) and plated with gold cannot be sold as vermeil without disclosing that it contains base metal.

The word "vermeil" is a French word which came into use in the English language, mostly in America, in the 19th century as an alternative for the usual term silver-gilt[1].

The White House has a collection of vermeil tableware kept on display (when not in use) in the Vermeil Room.

The Code of Federal Regulations 16, Part 23.5[2] defines Vermeil: "An industry product may be described or marked as 'vermeil' if it consists of a base of sterling silver coated or plated on all significant surfaces with gold or gold alloy of not less than 10 karat fineness, that is of substantial thickness and a minimum thickness throughout equivalent to two and one half (2½) microns (or approximately 1/10000ths of an inch) of fine gold."