Battlefield 1942 is a 3D World War II first-person shooter (FPS) computer game developed by Swedish company Digital Illusions CE and published by Electronic Arts for Microsoft Windows (2002) and Apple Macintosh (2004). The game can be played in singleplayer mode against the computer game AI or in multiplayer mode against players on the Internet or in a Local Area Network. It is also a popular platform for mod developers, with a large number of released modifications that alter the gameplay and theme.

Each battle takes place on one of several maps located in a variety of places and famous battlefields in all of the major theaters of World War II: the Pacific, European, North African, Eastern , and Italian Fronts. Combat is always fought between the Axis Powers and the Allies. The location determines which nation-specific armies are used (for example, on the Wake Island map, it is Japan versus the United States, while on the Battle of Britain map, it is Germany versus the United Kingdom). The maps in Battlefield 1942 are based on real battles and are somewhat realistically portrayed.

The gameplay of Battlefield 1942 generally has a more cooperative focus than previous games of this nature, as it is not only important to kill the opposition but to also hold certain "control points" around the map. Capturing control points allow the team to reinforce themselves by enabling players and vehicles to spawn in the certain area. Consequently, capturing and controlling control points also would reduce enemy reinforcements. Battlefield 1942 was one of the first mainstream games to represent a dramatic shift in FPS game play mentality not only favoring individualism, but simultaneously encouraging teamwork and coordination.

The default game play mode, Conquest, centers on the capture and control of control points; once a team captures a control point, its members can respawn from it. When a team loses control of all their control points, they cannot respawn. And if no one is alive, the team with no "spawn" points loses. 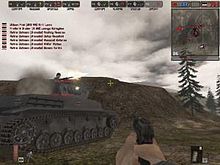 Battlefield 1942 features combat both as infantry and in vehicles.

Games are composed of rounds. A team wins the round when the other team runs out of tickets. A team loses tickets when its members are killed, but also when the other team holds half or more than half of the capture points on the map. Therefore, sometimes the winning team must hunt down straggling or hiding enemy forces at the end of a round.

Spawn tickets also play a vital role in the success of both teams. Every time a player on a team dies and respawns, his team loses one ticket. Every team starts each round with between 150 and 300 tickets, depending on the team's role (e.g., defense). Teams also gradually lose tickets depending on how many spawn points they control. As a general rule, the fewer spawn points controlled by a team, the more tickets they lose. For a team of 32 on a 64 player map, with 150 tickets, this means a little less than 5 re spawns or deaths on average for every player if they hold their starting spawn points.

The player can choose to play as either the Allied powers or the Axis powers. The Allies consists of the United States, the United Kingdom, the Soviet Union, Canada, and the Free French Forces, while the Axis consists of Germany, Japan, and Italy. Regardless of which nation is chosen by the player, there are five different roles of infantry that the player can assume the role of: Scout, Assault, Medic, Anti-tank, and Engineer.

Each role has its own strength and weakness. For example, the scout role has long-range surveillance, high stopping power and the ability to provide spotting for artillery shelling against an enemy position (unlike other games with a similar feature, other player characters must also supply the artillery fire); however, the sniper rifle is not designed to be used in close-quarter combat and players frequently treat this role as just a plain sniper role by not providing spotting for artillery. Assault is the standard role, and provides very aggressive firepower. The Anti-tank role specializes against vehicles and tanks, but their main weapon is innacurate against enemy infantry. The Medic role has the ability to heal (himself and other players), but his sub-machine gun has less stopping power than the Assault's weapons. The Engineer has the ability to repair damaged vehicles and stationary weapons, and they also have the ability to deploy explosives, which are highly effective against both enemy infantry and vehicles, and land mines, which destroy enemy vehicles on contact. In Europe, the engineer is equipped with a bolt action rifle, normally a scopeless version of that team's sniper rifle. In the Pacific, the American Engineer is issued an M1 Garand rifle, while his Japanese counterpart uses the similar Type 5.

Battlefield 1942 was built on the formula of the less successful Codename Eagle computer game, set in an alternate history World War I. It featured single and multiplayer modes. The earlier Refractor 1 engine had more arcade-style physics and a less realistic focus than its successor, Refractor 2, which was used in BF2. A Macintosh-compatible version of BF1942 was also made and released by Aspyr Media in mid-2004. An Xbox version of the game was also announced in early 2001 but was cancelled almost two years later so Electronic Arts could more closely work on an expansion pack for the PC.[4][5] Due to the restriction on use of the swastika in Germany, the Weimar Republic flag is used instead of the WWII era Reichskriegsflagge by the German side.[citation needed]

On the review aggregator GameRankings, the game has an average score of 89% based on 46 reviews.[7] On Metacritic, the game has an average score of 89 out of 100, based on 27 reviews.[8] At 6th annual Interactive Achievement Awards, BF1942 received awards for Online Gameplay, Innovation in PC Gaming, PC Game of the Year, and Game of the Year. On March, 2010 Battlefield 1942 was awarded with "Swedish game of the decade" award at the computer game gala hosted by Swedish Games Industry[9]