Muskie held the highest office (Secretary of State) held by a Polish American in U.S. history, and also is the only Polish American ever nominated by a major party for Vice President.

Muskie was born in Rumford, Maine. His father, Stephen Marciszewski (mar-chih-SHEF-ski) immigrated to the United States in 1903 and changed his name to Muskie. His mother Josephine (née Czarnecki) was born in Buffalo, New York to Polish immigrants. His parents, Roman Catholics, had seven children, of whom six survived.

Muskie attended Bates College in Lewiston, Maine, where he majored in history and government. While at Bates, Muskie was a successful member of the debating team, participated in several sports, and was elected to student government. He also worked during the school year as a waiter, and during the summers at a hotel in Kennebunk, Maine, to supplement the scholarship that allowed him to attend the college. He graduated from Bates in 1936, and from Cornell Law School in 1939.

During World War II, Muskie served in the United States Navy, rising to the rank of lieutenant. After the war, he opened a private law practice in Waterville, Maine, and married Jane Gray.

After the war, he was instrumental in building up the Democratic Party in Maine. Maine had traditionally been a strongly Republican state, notable for being, with Vermont, one of the only two states that Alf Landon carried against Franklin D. Roosevelt in 1936.

Muskie ran in the 1947 election to become mayor of Waterville, Maine, but was unsuccessful.[1] He served in the Maine House of Representatives before being elected governor in 1954.

In 1968, Muskie was nominated for Vice President on the Democratic ticket with sitting Vice President Hubert Humphrey. The Humphrey-Muskie campaign lost the election to Richard Nixon and Spiro Agnew. Humphrey and Muskie 42.72 percent of the popular vote and carried 13 states and 191 electoral votes; Nixon and Agnew won 43.42 of the popular vote and carried 32 states and 301 electoral votes, while the third party ticket of George Wallace and Curtis LeMay, running as candidates of the American Independent Party, taken 13.53 of the popular vote and took five states in the Deep South and their 46 votes in the electoral college. Because of Agnew's apparent weakness as a candidate relative to Muskie, Humphrey was heard to remark that voters' uncertainties about whom to choose between the two major presidential candidates should be resolved by their attitudes toward the Vice-Presidential candidates.[2]

Continuing his career in the Senate, Muskie served as chairman of the Senate Budget Committee through the Ninety-third to the Ninety-sixth Congresses in 1973–80.

In 1970, the Maine senator was chosen to articulate the Democratic party's message to congressional voters before the midterm elections. Muskie's national stature was raised as a major candidate for the Democratic presidential nomination in 1972. In 1973, he gave the Democratic response to Nixon's State of the Union address.[3] 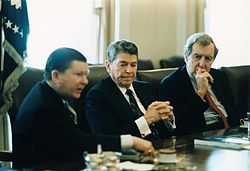 Before the 1972 election, Muskie was viewed as a front-runner for the Democratic presidential nomination. In August 1971 Harris polling amid a growing economic crisis, Muskie came out on top of incumbent Nixon if the election had been held that day.[4] The nation was at war in Vietnam and President Richard Nixon's war policies (and foreign policy, more generally) promised to be a major issue in the campaign.[2]

The 1972 Iowa caucuses, however, significantly altered the race for the presidential nomination. Senator George McGovern from South Dakota, initially a dark horse candidate, made a strong showing in the caucuses which gave his campaign national attention. Although Muskie won the Iowa caucuses, McGovern's campaign left Iowa with momentum. Muskie himself had never participated in a primary election campaign, and it is possible that this led to the downfall of his campaign. Although Muskie went on to win the New Hampshire primary, the victory was only by a small margin, and his campaign faltered.[2]

The collapse of Muskie's momentum early in the 1972 campaign is also attributed to his response to campaign attacks. Prior to the New Hampshire primary, the so-called "Canuck letter" was published in the Manchester Union-Leader. The letter claimed that Muskie had made disparaging remarks about French-Canadians – a remark likely to injure Muskie's support among the French-American population in northern New England. Subsequently, the paper published an attack on the character of Muskie's wife Jane, reporting that she drank and used off-color language during the campaign. Muskie made an emotional defense of his wife in a speech outside the newspaper's offices during a snowstorm. Though Muskie later stated that what had appeared to the press as tears were actually melted snowflakes, the press reported that Muskie broke down and cried, shattering the candidate's image as calm and reasoned.[5]

Evidence later came to light during the Watergate scandal investigation that, during the 1972 presidential campaign, the Nixon campaign committee maintained a "dirty tricks" unit focused on discrediting Nixon's strongest challengers. Federal Bureau of Investigation (FBI) investigators revealed that the Canuck Letter was a forged document as part of the dirty-tricks campaign against Democrats orchestrated by the Nixon campaign.[6]

In a 1972 article for Rolling Stone, Hunter S. Thompson wrote that it was well known amongst journalists covering Muskie's campaign that Muskie had become addicted to Ibogaine, an obscure Brazilian painkiller. The rumor reappeared during the campaign on newswires. In a 1977 TV interview for CBC News, Thompson stated that he invented the story and was surprised when he realized that people were taking it seriously.

Muskie as Secretary of State

Muskie returned to serve in the Senate, where he served as the first chairman of the new Senate Budget Committee starting in 1974. In 1980, he was tapped by President Jimmy Carter to serve as Secretary of State, following the resignation of Cyrus Vance. Vance had opposed Operation Eagle Claw, a secret rescue mission intended to rescue American hostages held by Iran. After that mission failed with the loss of eight U.S. servicemen, Vance resigned.

There was a short-lived "draft Muskie" movement in the summer of 1980 that was seen as a favorable alternative to a deadlocked convention. One poll showed that Muskie would be a more popular alternative to Carter than Kennedy, implying that the attraction was not so much to Kennedy as to the fact that he was not Carter. Muskie was polling even with Ronald Reagan at the time, while Carter was seven points down.[7] The underground draft campaign failed, but became a political legend.[8]

Muskie attempted to bring the hostages home by diplomatic means, appealing to the United Nations and Iran. Muskie left public office following Carter's loss of the 1980 presidential election to Ronald Reagan, and was awarded the Presidential Medal of Freedom by Carter on January 16, 1981. 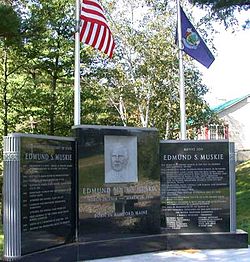 Memorial to Edmund Muskie in his birthplace, Rumford, Maine.

Muskie retired to his home in Washington, D.C. in 1981. He continued to work as a lawyer for some years. In 1987, as an elder statesman, Muskie was appointed a member of the President's Special Review Board known as the "Tower Commission" to investigate President Ronald Reagan's administration's role in the Iran-Contra scandal.

Muskie died in Washington, D.C. of congestive heart failure in 1996, two days shy of his 82nd birthday. He is buried in Arlington National Cemetery. Muskie's papers[9] are kept at the Edmund S. Muskie Archives and Special Collections Library[10] at Bates College in Lewiston, Maine.