Kostrzyn nad Odrą [ˈkɔstʂɨn ˌnad ˈɔdrɔ̃] (German: Küstrin) is a town in western Poland, at the confluence of the Oder and Warta rivers, on the border with Germany. Located in the Lubusz Voivodeship, in Gorzów County, it had 19,952 inhabitants as of 2007. 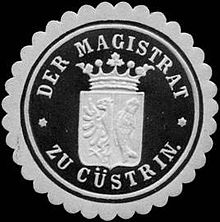 The region of Kostrzyn was settled by Germanic peoples until the 9th century, when Slavic people arrived in the area, and the region came under the control of Pomerania. From the 960s-1200 most of the territory, along with its castle, belonged to the dukes of Poland. Duke Mieszko I of Poland used Kostrzyn's strategic location as a staging area during his expedition to Cedynia. Bolesław I the Brave also prepared here for conquests and battles in Bautzen.[1]

The name of the town was first mentioned in 1232 in a Polish letter to the Teutonic Knights, in which the old Slavic name Cozsterine (kostrzyca) was mentioned. In the 12th century it developed into a fortified outpost and a Polish taxation chamber. In 1223 Prince Władysław Odonic granted the town to German brothers of the Knights Templar, although it was seized by the Margraviate of Brandenburg in 1261. By 1300 the town received Magdeburg rights by Margrave Albrecht III of Brandenburg and started to grow rapidly, owing largely to trade on the rivers.

From 1535-1571 the town was the seat of John of Brandenburg-Küstrin, who made it the capital of the Neumark region and built a castle. With time the castle was expanded into a fortress, one of the largest such facilities in the region. While still crown prince, Frederick the Great was imprisoned in the fortress, from which he witnessed the execution of his friend Hans Hermann von Katte on 6 November 1730. Captured by the French in 1806, it remained under occupation from a French military garrison for the remainder of the Napoleonic Wars. During the retreat from the east in 1814 the town was set on fire and burnt to the ground. After that the town recovered and became one of the most important railway hubs in the Kingdom of Prussia and later the German Empire. In 1857 it was linked to Berlin and Frankfurt (Oder) and in 1875 with Stettin (Szczecin) on the Pomeranian coast. In 1900 its population reached 16,473, including the garrison of the fortress.

At the outbreak of World War II Küstrin had 24,000 inhabitants. However, due to Allied air raids on the railway hub and local factories and especially during the Battle of the Oder-Neisse and Battle of the Seelow Heights, almost 95% of the buildings were destroyed (including all 32 of the city's factories) and the town was generally deserted. The suburb Alt-Drewitz (modern Drzewice, one of Kostrzyn's boroughs) contained the Nazi POW camp Stalag III-C Alt-Drewitz, used mostly for French, Soviet, and Italian prisoners of war. From 1943-45 the town also housed a number of German forced labour camps and a sub-camp of Sachsenhausen concentration camp. After the war the ruined town was placed under Polish administration by the Potsdam Conference; Germans remaining in the town were subsequently murdered or expelled westward and replaced with expelled Poles. The remnants of the old town within the fortress walls, including the castle in which the young Frederick the Great had been imprisoned, were razed after the war and the bricks used to rebuild Polish cities elsewhere. More recently, plans to rebuild some of the old town in a historical style were mooted, but this project appears to be on hold. The section of the town on the west bank of the Oder remained in Germany and is now called Küstrin-Kietz.

Since 2004 Kostrzyn annually hosts Przystanek Woodstock in the summer, the largest open-air music festival in Europe and one of the largest in the world.

Number of inhabitants in years

Kostrzyn nad Odrą is twinned with: