Michele Greco (Ciaculli, May 12, 1924 – Rome, February 13, 2008) was a member of the Sicilian Mafia, previously incarcerated for multiple murders. His nickname was "il Papa" (The Pope) because of his ability to mediate between different Mafia families.[1] Greco was the head of the Sicilian Mafia Commission.

Michele Greco was part of the powerful Greco Mafia clan that ruled both in his native Ciaculli and in Croceverde Giardini, two suburbs close to Palermo. He took over the mandamento of Croceverde Giardini after his father Giuseppe Greco, "Piddu u tinenti", died. He was a cousin of Salvatore "Ciaschiteddu" Greco, the first "secretary" of the first Sicilian Mafia Commission that was formed somewhere in 1958. He and his brother Salvatore Greco operated low profile and were able to enter into relationships with businessmen, politicians, magistrates and law enforcement officials through their membership of Masonic lodges.[2]

Salvatore Greco’s nickname was "The Senator" for his political connections.[3] He was the kingmaker of Christian Democrat politicians such as Giovanni Gioia, Vito Ciancimino and Giuseppe Insalaco.[4] Many of those notables were invited by "The Pope" and "The Senator" to wine and dine and take part in hunting parties at his estate La Favarella. The estate was also used as a refuge for mafiosi on the run, and to set up a heroin laboratory.[5][6]

Greco, along with other Mafia families around Palermo, controlled a large portion of the water supply. He was financing the digging of his wells with government money. According to the law, landowners were only allowed to have wells for their own private use and all excess water belonged to the public. However, the city of Palermo issued regular contracts to buy water from Greco and other Mafia bosses for a full third of the water supply. During the summer, when water was particularly scarce and badly needed for irrigation, Greco sold water at exorbitant prices. The perpetual shortage of water was maintained by the Mafia and their friends in city hall.[7][8]

Another money making scheme was collecting subsidies from the European Community (EC) for destroying citrus crops he had never grown. The EC, in order to limit production, paid farmers to destroy part of their production. Greco paid EC inspectors to falsify the records.[8]

Michele Greco was nominated the head of the Sicilian Mafia Commission (Cupola) in 1978, after Gaetano Badalamenti was expelled. Greco gave the Commission a façade of neutrality behind which the Corleonesi effectively hid their expansion.[9] In 1981, Mafia bosses Stefano Bontade and Salvatore Inzerillo were murdered within a few weeks of each other in the midst of the Second Mafia War. Through his position within the Cupola, Michele Greco assumed indirect control of Stefano Bontade's Mafia family after his murder. Not long after Greco invited a number of Bontade's allies for a meeting at his country estate. A couple members of the clan were suspicious and did not go, but at least eleven mafiosi went along and were wiped out, never to be seen again.

As it turned out, Michele Greco had been allied with Salvatore Riina and the Corleonesi all along. Riina had used Greco's position on the Commission to help banish Gaetano Badalamenti from the Mafia and then, after Riina ordered Bontade's murder, he had Greco oversee Bontade's Mafia clan who was in control of a heroin distribution network in the United States, along with the Inzerillo Mafia clan.

One of the men who did not turn up to the fateful meeting at Greco's estate was Salvatore Contorno. He sensed trouble and soon went into hiding when the Mafia War broke out. He narrowly escaped death during an ambush by a Corleonesi hitman, Michele's nephew Pino Greco. While in hiding from both the authorities and the Corleonesi, Contorno sent anonymous letters to the police, revealing to the authorities information on the Mafia, its members, the various factions and the violent turmoil it was undergoing. Contorno was eventually arrested in 1983 and became a fully fledged informant the following year, following Tommaso Buscetta's example.

Contorno's revelations in his letters to the police were the first time the authorities had really learned of Michele Greco's high-ranking membership of the Mafia. Previously he had just been regarded as a rather secretive landowner with a suspiciously high-income, although he did come from a long line of mafiosi.

Greco was a powerful mafia boss, descended from a long line of mafiosi, but in the latter part of his criminal career he could be best described as little more than Riina's "puppet boss". According to pentito Tommaso Buscetta, Michele Greco, "given his bland and weak personality, was the perfect person to become head of the Commission so as not to stand in the way of Riina designs."[10] Buscetta explained that during meetings between the heads of various Mafia families, Michele Greco would just nod his head and agree with virtually everything Riina said. 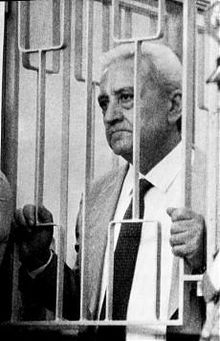 Based on Salvatore Contorno's anonymous revelations, police chief Antonino 'Ninni' Cassarà drew up a report in July 1982 listing 162 Mafiosi who warranted arrest, and the report was unofficially known as the 'Michele Greco + 161' report, signalling Greco's importance over the other suspects.[11] On August 6, 1985, Ninni Cassarà and one of his bodyguards, Giovanni Lercara, were massacred by a team of up to fifteen gunmen outside Cassarà's home in front of his horrified wife.

The 'Michele Greco + 161' report was just the start of an investigation that was to become the Maxi Trial, where most of the leadership of the Mafia were tried for numberless crimes. On July 9, 1983, Greco was indicted by judge Giovanni Falcone, along with 14 others among which his brother Salvatore Greco, Totò Riina, Bernardo Provenzano and Nitto Santapaola for the murder on the prefect of Palermo, General Carlo Alberto Dalla Chiesa on September 3, 1982.[3]

After four-years on the run, Michele Greco was arrested on February 20, 1986, and he joined the hundreds of defendants at the Maxi Trial, which had started just ten-days previously.[12] Greco was charged with ordering seventy-eight murders,[13] including those of the anti-Mafia magistrate Rocco Chinnici, Chinnici's two bodyguards and an innocent bystander, the four of whom had been killed by a car bomb in 1983.

Greco gave testimony at the trial where, like his co-defendants, he insisted he was completely innocent and knew nothing about any Mafia. To illustrate his standing as a supposedly honest citizen, he boasted of all the illustrious people he had entertained at his large estate, including a former chief prosecutor and police chiefs. He also admitted that Stefano Bontade had often hunted on his estate, and in something of an alarmingly off-hand statement, Greco said that he and Stefano "were together on the Holy Friday, just days before his misfortune."[5] The "misfortune" he referred to was Stefano being machine-gunned in the face.

At the end of the trial, on December 16, 1987, Michele Greco, then aged 63, was found guilty on all charges and sentenced to life imprisonment.[13]

The Maxi Trial was largely undone by notoriously generous appeals, mostly thanks to Corrado Carnevale, who would release Mafiosi on the slightest of pretexts, much to the frustration of the Maxi Trial's architects, Giovanni Falcone and Paolo Borsellino. Greco was released on appeal on February 27, 1991,[14] but Giovanni Falcone, who had become head of the Penal Affairs section of the Italian ministry of Justice, issued a decree that ordered the re-incarceration of Greco and other mafiosi.[15]

In the light of this, Michele Greco was quickly rearrested in February 1992 and put back behind bars to serve his freshly reinstated life-sentence. Greco never admitted his crimes nor his position in Cosa Nostra. In a letter sent to the press in the summer of 2007, he claimed he was "as innocent as a newborn child." He added that "because of an injustice in the 1980s I have been buried alive and have been in prison for 22 years. The dampness of my cell has destroyed my health and I am truly in a bad way."[16] He remained in prison in Rome until his death on February 13, 2008.[17][18][19]

According to historian John Dickie, Greco "was the very archetype of a mafia capo: unsmiling, taciturn, given to speaking only in maxims and allusive parables."[6]