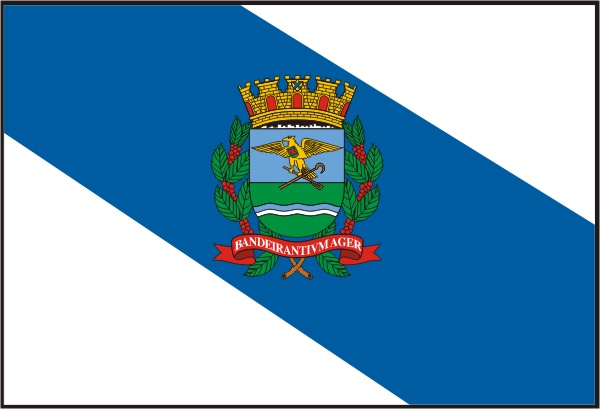 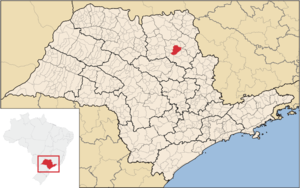 The city's population is composed of Italians, Portuguese, Spanish and Japanese decedents that came to the region because of the coffee agriculture in the mids of 19th century. During the 90's, northeast immigrants came to the region attracted by the economy development. researches indicate that Ribeirão Preto has a population of 547.417 habitants. [cite web|url=http://www.ibge.gov.br/cidadesat/default.php|title=IBGE - Cidades] The incorporates 34 , with a population about 1.4 million habitants.

Ribeirão Preto is the center of an urban agglomeration with about 547.417 inhabitants, and comprises the following municipalities:

The climate [cite web|url=http://www.ribeiraopreto.sp.gov.br/crp/dados/local/I01clima.htm|title=Climate in Ribeirão Preto] of Ribeirão Preto is tropical of altitude with rainy summer and dry winter.

The city was founded , , by farmers coming from the southeast of São Paulo State in search of good and for growing. The city was laid by a stream called Black Creek, and was named after it ("Ribeirão Preto" means black creek in Portuguese, sometimes the city name is mistranslated as "Black Stream", which is also the name of a hotel in the city). Eventually the farmers’ choice revealed itself as very adequate and the fertile soil of the Ribeirão Preto region allowed the highest in Brazil.

The rapid development of the coffee cultivation brought wealth and progress to the city, which by the 1880s had become the largest coffee producer in the world. Coffee, the “green gold” as it was called, was responsible for a kind of “gold rush” in the region, which attracted workers and adventurous people from several parts of the world. This movement was helped by the new , which linked Ribeirão Preto to São Paulo and to the port city of Santos, and by the abolition of in Brazil, in 1888. The end of slavery created a strong demand for labor and the “coffee barons”, as the coffee farmers were called, stimulated an - mostly from but also from , and - to Ribeirão Preto. Later, after the of 1929, several of these s bought the s from their indebted former employers.

At the beginning of the 20th century and during its first three decades, Ribeirão Preto was a rich city, boasting several s, European-style s, s and even two s. One of the opera houses - the "Carlos Gomes Theatre" (in honour of Brazilian opera composer ) - was demolished in 1949 but the other - the "Pedro II Theatre" (named in honor of Emperor Dom Pedro II), dating from the 1920s - resisted time and was restored and modernized during the 1990s. Its ceiling, completely destroyed in a fire of 1980, was rebuilt and gained a new design projected by the Japanese-Brazilian artist . The Pedro II Theatre is now the third largest opera house in Brazil and is the home of the Ribeirão Preto , one of the oldest and more important of Brazil.

An important fact for the city life happened in 1911 with the opening of its first , the , nowadays part of the group. It was Antarctica which built the Pedro II Theatre. The Antarctica factory led to the opening of several s in the city and one of them named Pinguim ("penguin" in Portuguese), became particularly famous and made Ribeirão Preto nationally renowned for the quality of its ("chope" or "chopp" in Brazilian Portuguese). Many people say that Pinguim has the best draught beer in Brazil and it became so important that it is now a symbol of the city; people say that coming to Ribeirão Preto and not visiting Pinguim is like going to and not seeing the . There are four Pinguim beer houses in Ribeirão Preto: two of them, called Pinguim 1 and 2 respectively, are at the November XV square (the central square of Ribeirão Preto) right beside the Pedro II Theatre). The other two are at the shopping centers Santa Úrsula and Ribeirão Shopping respectively. By the way, the Penguin beer house was named after the Antarctica company's logo (see at [http://www.antarctica.com.br] ).

But Pinguim is not the only one good beer house in Ribeirão Preto. Ribeirão Preto is a hot climate city, which makes people like to go out of their houses in the evenings to chat and enjoy cold draught beers in bars. Therefore, the city is teemed with bars of different kinds for different tastes, from the simple "botequins" or "botecos" that one can find in almost every corner to more sophisticated bars which rival with their counterparts in São Paulo or Rio.

Ribeirão Preto has also one of the first micro-breweries in Brazil, Cervejaria Colorado, founded in 1997 produces three different types of beers, two ales and one lager. Cervejaria Colorado is located at Rua Minas 400 and has a bar at Avenida Independencia 3242 where it offers 70 different labels of beer from all over the world.

Lately Ribeirão Preto's highest acclaim comes in . The team plays under the name COC-Ribeirão Preto (Colegio Oswaldo Cruz) and finished 1st in the National Championship first division in 2003. Other finishes of note include championships in the Paulista league (state of São Paulo) in '02,'03,'04,'05 and '06 when was champion. COC-Ribeirão Preto plays its home games in the Gym "Cava do Bosque", which is located on the land associated with the Municipal Park of Sports.

The city also possesses two s, the (of Comercial FC) and Santa Cruz (of Botafogo FC). Neither Comercial nor Botafogo are currently in Brazil's top three soccer divisions. On the national and international scene, Botafogo is often confused with the Rio de Janeiro club with the same name to the extent that the Rio club is often credited with being the infamous club on which Pelé scored a record 8 goals in one game. One example is in Franklin Foer's book "How Soccer Explains the World". But it was in the Paulista championships on November 21, 1964 in the costal city of Santos and against the Ribeirão Preto team that Pelé achieved the incredible feat and his Santos team won by an 11 x 0 score. The 8 goals were pay back for the defeat Santos suffered on September 6, 1964 when they visited Ribeirão Preto during the first round of the tournament and lost 2 x 0. Not only had a "small" team beaten one of the "big" teams, but had done so while insulting the "King". A better claim to fame for Botafogo (often referred to as Botafogo-SP) is that Brazilian soccer captains (and brothers) and started their careers with Botafogo.

A noteworthy fact is that it was during the economic stagnation period from the 1940s to the 1950s that the city discovered and established its vocation as an educational and center. In 1942 the state government expropriated the Monte Alegre Farm, which was an important coffee farm from the Schmidt family of German immigrants, to transform it into an practical school. Several new buildings and houses for the professors were constructed over a land which held before tens of thousands of coffee plants. The new school was very well planned and urbanized and many trees were planted to provide shadow and give it a pleasant atmosphere. But the agricultural school never achieved a significant development and it was closed in 1951. A longstanding dream of the population of Ribeirão Preto was to have an and in 1952 the old farm was donated to the for the creation of a , which was the first school of its at Ribeirão Preto.

After the crash of 1929 the economy of Ribeirão Preto, based on a single export crop, collapsed, and the city had to adapt to a new situation. Since the city is relatively far from other major Brazilian urban centers, it found a new economic vocation in the services and commercial sector, which was developed to attend the local and regional demands.

The second economic boom in the history of Ribeirão Preto occurred after the of the 1970s. The increase in the oil price obliged Brazil to look for alternative means of ing and the solution found was the fuel program, or "" as it is called. Pró-Álcool led to the development of a technology which allows the use of ethanol ( alcohol) either as automotive fuel or as a additive. The latter improves performance and substitutes thus decreasing polluting emissions. Due to the Pró-Álcool program, farmers from the region of Ribeirão Preto were encouraged by government subsidies to grow sugarcane. The high productivity of the land around Ribeirão Preto rapidly placed the region as the largest alcohol and producer of the world, being responsible for 30 percent of Brazil’s sugarcane alcohol fuel.

Contrary to what happened during the city's first economic boom, this time Ribeirão Preto farmers and entrepreneurs did not concentrate themselves exclusively on a single crop and diversified their investments making the city one of the most important agribusiness centers of Brazil. Besides and alcohol, Ribeirão Preto's major products are , , , , , , , , , materials, s, and, of course, .

The sugarcane boom brought a new age of prosperity for the city, which was called the "Brazilian California" during the 1980s and early 1990s. On the one hand, this has increased the city's wealth and turned it into a sophisticated center of services for Brazil and but, on the other hand, the image of a new "" attracted many migrants from impoverished areas of Brazil leading to a rapid and the appearance of s ("favelas" as they are called in Brazil) with all the negative aspects associated to them like and high and rates, an unfortunate fact that Ribeirão Preto shares with all other major Brazilian cities.

The mayor, Mr. (from the party coalition), was elected in October 2004 and took office on , . His term of office is four years. Mr. Gasparini is serving as a mayor for the fourth (non-consecutive) time.

* The Ribeirão Preto's public transportation system is operated by three companies and about 300 buses that attend 113 [cite web|url=http://www.ribeiraopreto.sp.gov.br/transerp/i07principal.asp?pagina=/transerp/central/i07indi.htm|title=Bus Routes] lines and routes.
* There are 30 routes [cite web|url=http://www.ribeiraopreto.sp.gov.br/transerp/i07principal.asp?pagina=/transerp/central/i07indi.htm|title=Micro Bus Routes] of micro buses (called leva-e-traz) for free that take people from distant districts to a nearer bus stop where they can take a regular bus.
* To take a bus is required an electronic card which contains credits that are debited corresponding to the price of a bus ride. These electronic cards are created by the transportation organ called Transerp. [cite web|url=http://www.ribeiraopreto.sp.gov.br/transerp/i07principal.asp?pagina=/transerp/i07servicos.htm&ancora=carteiraescolar|title=Transerp]

* Leite Lopes Airport [cite web|url=http://www.daesp.sp.gov.br/aeroportos/ribeirao.htm|title=Leite Lopes Airport] offers support and infrastructure compatible with airports of major centers and operates full-time and has an average of more than 30.000 flights and more than 385.000 passengers per year.

At present the railway system, that was very important for the town in the past, is found deactivated. Some projects exist to reactivate the system in the town. [cite web|url=http://www.ribeiraopreto.sp.gov.br/CRP/DADOS/Infra/I01TranspFerro.htm|title=Transporte Ferroviário]

The city plays a major role in 's Ender saga, as it becomes the headquarters of the Hegemony and the capital of the (the world government).