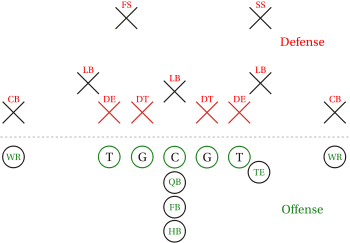 In American football, a lineman is a player who specializes in play at the line of scrimmage. The linemen of the team currently in possession of the ball are the offensive line, while linemen on the opposing team are the defensive line. A number of NFL rules specifically address restrictions and requirements for the offensive line. The defensive line is covered by the same rules that apply to all defensive players. Linemen are usually the largest players on the field in both height and weight, since their positions usually require less running and more strength than skill positions.

Interior offensive linemen are not eligible to catch forward passes, and are not allowed to have advanced past the line of scrimmage at the time a pass is thrown unless they are in contact with a defensive player. However, tight ends are eligible to catch passes.

An offensive lineman's motion during a play is often limited to just a few quick steps to establish position, followed by a wrestling match similar to sumo. Offensive linemen thus tend to be the largest players on the field, with excellent agility and balance but limited straight-line running speed.

When an offensive linemen knocks a player down on a block without falling down themselves, it is often known as a pancake block.[1] 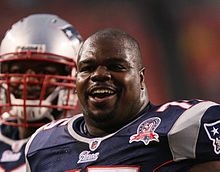 On running plays, the goal is to tackle the ball carrier. The defensive line attempts to maintain their original formation (even spacing without holes), but also to prevent any members of the opposing offensive line from successfully engaging the linebackers, who chase down the ball carrier. The defensive tackles are usually the most skilled run defenders on the team.

Because the defense does not know whether the offense is attempting to run a passing play or a running play (or whether a quarterback will give up on an attempt to pass and instead run with the ball), they must balance passing and running strategies: running around offensive linemen and avoiding contact may allow faster pressure on a quarterback, but it also leaves a hole in the defensive line and frees an offensive lineman to engage a linebacker, enabling a big running play.

Defensive linemen--particularly defensive ends--are called upon to do more running than offensive linemen, thus they usually tend to be somewhat smaller and faster.