The park is part of the Kruger to Canyons Biosphere, an area designated by the United Nations Education and Scientific Organisation (UNESCO) as an International Man and Biosphere Reserve (the "Biosphere").

The park has 9 main gates that allow entrance to the different champa.

The park is the site of the popular eyewitness viral video Battle at Kruger.

In 1895, Jakob Louis van Wyk introduced in the Volksraad of the old South African Republic, a motion to create the game reserve which would become the Kruger National Park. That motion, introduced together with another Volksraad member by the name of R. K. Loveday, and accepted for discussion in September 1895 by a majority of one vote, resulted in the proclamation by Paul Kruger president of the Transvaal Republic, on March 26, 1898, of a “Government Wildlife Park.” This park would later be known as the Sabi Game Reserve and was expanded into the Kruger National Park in 1926.[6]

The park was initially created to control hunting[7] and protect the diminished number of animals in the park.

During 1923, the first large groups of tourists started visiting the Sabie Game Reserve, but only as part of the South African Railways' popular "Round in Nine" tours. The tourist trains used the Selati railway line between Komatipoort on the Mozambican border and Tzaneen in Limpopo Province. The tour included an overnight stop at Sabie Bridge (now Skukuza) and a short walk, escorted by armed rangers, into the bush. It soon became a highlight of the tour and it gave valuable support for the campaign to proclaim the Sabie Game Reserve as a national park.[11][12]

After the proclamation of the Kruger National Park in 1926, the first three tourist cars entered the park in 1927, jumping to 180 cars in 1928 and 850 cars in 1929.[5]
Warden James Stevenson-Hamilton retired on the 30th April 1946, after 44 years as warden of the Kruger Park and its predecessor, the Sabi Game Reserve. 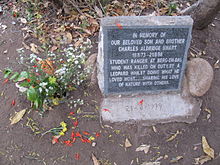 Plaque in the park. Now and then people do get killed, however this is extremely rare.

He was replaced by Colonel J. A. B. Sandenburg of the South African Air Force.[11] During 1959, work commenced to completely fence the park boundaries. Work started on the southern boundary along the Crocodile River and in 1960 the western and northern boundaries were fenced, followed by the eastern boundary with Mozambique. The purpose of the fence was to curb the spread of diseases, facilitate border patrolling and inhibit the movement of poachers.[11]

The Makuleke area in the northern part of the park was forcibly taken from the Makuleke people by the government in 1969 and about 1500 of them were relocated to land to the South so that their original tribal areas could be integrated into the greater Kruger National Park.[13][14]

In 1996 the Makuleke tribe submitted a land claim for 19,842 hectares (198.42 km2) in the northern park of the Kruger National Park.[15] The land was given back to the Makuleke people, however, they chose not to resettle on the land but to engage with the private sector to invest in tourism, thus resulting in the building of several game lodges.[16][17]

Geography of the Kruger National Park

Luvuvhu and Limpopo rivers at Crookes Corner in Pafuri triangle

The park lies in the north-east of South Africa,[8] in the eastern parts of Limpopo and Mpumalanga provinces. Phalaborwa, Limpopo is the only town in South Africa that borders the Kruger National Park. It is one of the largest national parks in the world, with an area of 19,485 square kilometres (7,523 sq mi) The park is approximately 360 kilometres (220 mi) long,[8] and has an average width of 65 kilometres (40 mi).[10] At its widest point, the park is 90 kilometres (56 mi) wide from east to west.[8] To the north and south of the park two rivers, the Limpopo and the Crocodile respectively, act as its natural boundaries. To the east the Lebombo Mountains separate it from Mozambique. Its western boundary runs parallel with this range, roughly 65 km distant. The park varies in altitude between 200 m in the east and 840 m in the south-west near Berg-en-Dal. The highest point in the park is here, a hill called Khandzalive. Several rivers run through the park from west to east, including the Sabie, Olifants, Crocodile, Letaba, Luvuvhu and Limpopo rivers.

The climate of the Kruger National Park and Lowveld is subtropical. Summer days are humid and hot with temperatures often soaring to above 38 °C (100 °F). The rainy season is from September until May. The dry winter season is the ideal time to visit this region for various reasons. There is less chance of contracting malaria and the days are milder. Viewing wildlife is more rewarding as the vegetation is more sparse and animals are drawn to the waterholes to drink every morning and evening.

Fauna of the Kruger National Park 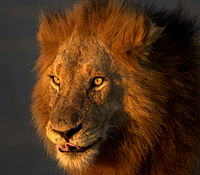 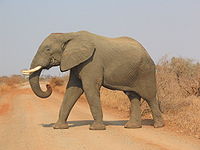 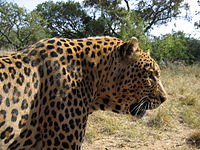 Plant life in the park consists of four main areas:

This area lies between the western boundary and roughly the centre of the park south of the Olifants River. Combretums, such as the red bush-willow (Combretum apiculatum), and Acacia species predominate while there are a great number of marula trees (Sclerocarya caffra). The Acacias are dominant along the rivers and streams, the very dense Nwatimhiri bush along the Sabie River between Skukuza and Lower Sabie being a very good example.

South of the Olifants River in the eastern half of the park, this area provides the most important grazing-land. Species such as red grass (Themeda triandra) and buffalo grass (Panicum maximum) predominate while the knob-thorn (Acacia nigrescens), leadwood (Combretum imberbe) and marula (Sclerocarya caffra) are the main tree species.

This area lies in the western half of the park, north of the Olifants River. The two most prominent species here are the red bush-willow (Combretum apiculatum) and the mopane tree (Colophospernum mopane).

There are a number of smaller areas in the park which carry distinctive vegetation such as Pretoriuskop where the sickle bush and the silver cluster-leaf (Terminalia sericae) are prominent. The sandveld communities near Punda Maria are equally definitive, with a wide variety of unique species.

All the Big Five game animals are found at Kruger National Park, which has more species of mammals than any other African Game Reserve (at 147 species). There are webcams set up to observe the wildlife.[19]

The park stopped culling elephants in 1989 and tried translocating them, but by 2004 the population had increased to 11,670 elephants, by 2006 to approximately 13,500 and by 2009 to 11,672. The park's habitats can only sustain about 8,000 elephants. The park started using annual contraception in 1995, but has stopped that due to problems with delivering the contraceptives and upsetting the herds.

Kruger supports packs of the endangered African Wild Dog, of which there are thought to be only about 400 in the whole of South Africa.[20]

Kruger National Park holds over 48 tons of ivory in storage. According to Convention on the International Trade in Endangered Species of Wild Flora and Fauna (CITES), it is allowed to sell 30 tons.

Following approval by CITES, 47 metric tons of stockpiled ivory from Kruger were auctioned on November 6, 2008. The sale fetched approximately US$6.7 million which will be used towards increasing anti-poaching activity. The average price for the 63 lots on auction was US$142/kg.

Kruger houses 114 species of reptile, including black mamba and 3000 crocodiles.

Thirty-three species of amphibians are found in the Park,[22] as well as 50 fish species. A Zambesi shark, Carcharhinus leucas, also known as the bull shark, was caught at the confluence of the Limpopo and Luvuvhu Rivers in July 1950. Zambezi sharks tolerate fresh water and can travel far up rivers like the Limpopo.[23]

The Kruger National Park has 21 rest camps, as well as 2 private lodge concessions, and 15 designated private safari lodges. The concessions are parcels of land operated by private companies in partnership with communities, who outsource the operation of private lodges. 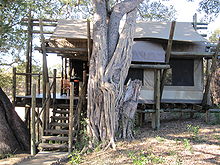 Gates to the Kruger Park 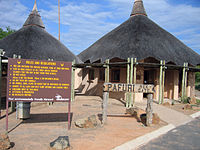 The Kruger Park has the following gates: 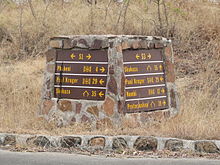 Signpost in the park.

Nine different trails are on offer in the Kruger National Park. Some are overnight and they last several days in areas of wilderness virtually untouched by humans. There are no set trails in the wilderness areas; a visitor walks along paths made by animals or seeks out new routes through the bush.