Operation Bernhard was the codename of a secret Nazi plan devised during the Second World War by the RSHA and the SS to destabilise the British economy by flooding the country with forged Bank of England £5, £10, £20, and £50 notes. It is the largest counterfeiting operation in history and has been fictionalised in books, the BBC comedy-drama miniseries Private Schulz and a 2007 Oscar-winning Austrian film, The Counterfeiters (Die Fälscher).

The plan was directed by, and named after, Schutzstaffel Sturmbannführer (SS Major) Bernhard Krüger, who set up a team of 142 counterfeiters from inmates at Sachsenhausen concentration camp at first, and then from other camps, especially Auschwitz. Beginning in 1942, the work of engraving the complex printing plates, developing the appropriate rag-based paper with the correct watermarks, and breaking the code to generate valid serial numbers was extremely difficult, but by the time Sachsenhausen was evacuated in April 1945 the printing press had produced 8,965,080 banknotes with a total value of £134,610,810. The notes are considered among the most perfect counterfeits ever produced, being almost impossible to distinguish from the real currency. 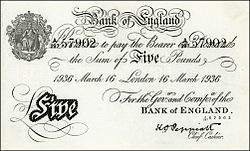 The initial plan was to destabilize the British economy by dropping the notes from aircraft, on the assumption that most Britons would collect the money they found floating from the sky and spend it into their economy, thus triggering inflation. This scheme was not put into effect: it was postulated that the Luftwaffe did not have enough planes to effectively deliver the forgeries, and by that time the operation was in the hands of SS foreign intelligence. From late 1943, approximately one million notes per month were printed. Many were transferred from SS headquarters to a former hotel near Meran in South Tyrol, Northern Italy, from where they were laundered and used to pay for strategic imports and German secret agents operating in the Allied countries. It is alleged that counterfeit currency was used to finance the rescue of the arrested former Italian dictator Benito Mussolini in 1943, but there is no evidence to confirm this.

The Bank of England first learned of a plot from a spy as early as 1939. It detected the existence of the notes in 1943, and declared them "the most dangerous ever seen." Clerks first recorded the counterfeits from a British bank in Tangiers. As late as the 1940s every banknote issued by the Bank of England was recorded in large leather-bound ledgers, still in the Bank's archives, and it was noted that one of the notes had been recorded as having been paid off.

The counterfeiting team turned its attention to US currency, producing samples of one side of $100 bills on 22 February 1945, with full production scheduled to start the next day, but the Reich Security Head Office (RSHA) ordered the work halted and the press dismantled.

On the evacuation of Sachsenhausen, the counterfeiting team was transferred to Redl-Zipf in Austria, a subsidiary camp of Mauthausen-Gusen concentration camp. At the beginning of May 1945, the team was ordered to transfer to Ebensee subsidiary camp, where they were to be killed together[citation needed]. Their SS guards had only one truck for the prisoners, so the transfer required three round trips. The truck broke down during the third trip, and the last batch of prisoners had to be marched to Ebensee, where they arrived on 4 May. The guards of the first two batches of prisoners fled when the prisoners at the Ebensee camp revolted and refused to be moved into tunnels, where they would have probably been blown up. The counterfeiters then dispersed among the prisoners at Ebensee. The order was that all the counterfeiters be liquidated together; the delayed arrival of the third batch therefore saved the lives of all of them.

The Ebensee camp was liberated by US forces on 6 May 1945.[1] One of the prisoners, the Jewish Slovak printer-turned-counterfeiter Adolf Burger, later contributed to the awareness of Operation Bernhard with several versions of his memoirs published in Central European languages and in Persian. An English version was published in 2009 as The Devil's Workshop.[2]

After the war, Major Krüger was detained by the British for two years, then turned over to the French for a year. He said they asked him to forge documents but that he refused. He was released in 1948 without any charges being pressed. In the 1950s he went before a De-Nazification Court, where statements were produced from the forger-inmates whose lives he had been responsible for saving. He later worked for the company that had produced the special paper for the Operation Bernhard forgeries. He died in 1989.

After the defeat of the Third Reich, large bundles of fake pounds ended up in the hands of the Jewish underground, which used the forged notes to buy equipment and to bring displaced persons to the Holy Land, among them Chaim Shurik, a Polish printer whose 20-page account of his counterfeiting days was written in Hebrew.[3] The Jewish underground likely had access to forged U.S. dollars as well, but apparently avoided using them so as not to damage relations with the United States.

It is believed that most of the notes produced ended up at the bottom of Lake Toplitz near Ebensee, from where they were recovered by divers in 1959, but examples continued to turn up in circulation in Britain for many years, which caused the Bank of England to withdraw all notes larger than £5 from circulation. A new £5 banknote colored blue was issued on 21 February 1957, and the other denominations were reintroduced on February 21 1964 (£10), July 9 1970 (£20) and March 20 1981 (£50).[4]

German spy Elyesa Bazna (codename "Cicero") was paid with counterfeit notes, and unsuccessfully sued the German government after the war for outstanding pay. 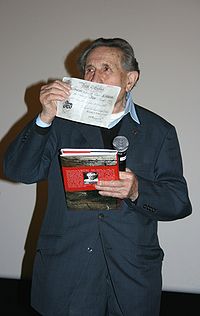 A fictionalized version of the Operation Bernhard story was the topic of a comedy drama serial, Private Schulz, starring Michael Elphick and Ian Richardson, produced by the BBC in 1980.

It also forms part of the backstory for the forger in the 1972 Frederick Forsyth novel, The Odessa File.

The 2007 Oscar-winning Austrian film, The Counterfeiters (Die Fälscher), tells the story of Salomon Sorowitsch, loosely based on the lives of counterfeiter Salomon Smolianoff, and of Adolf Burger,[5] a Jewish Slovak book printer who was put to work on Operation Bernhard in Sachsenhausen concentration camp and whose memoirs were turned into the screenplay.

In the movie 5 Fingers, based upon the life of the German spy Cicero, the final plot turn is the revelation that the British currency is counterfeit.

In the British comedy series "Goodnight Sweetheart" starring Nicholas Lyndhurst, the episode entitled "It's a Sin to Tell a Lie". Operation Bernhard was used as a way for the main characters to catch a Nazi spy who was passing off forged notes in local pubs and shops in London.

The 1941-published novel Traitor's Purse (US title The Sabotage Murder Mystery) by Margery Allingham featured (presumably by coincidence) a very similar plot wherein, to lend them verisimilitude, the forged notes were to be posted to every household in Britain in parallel with a secretly-planned genuine Government mailing.