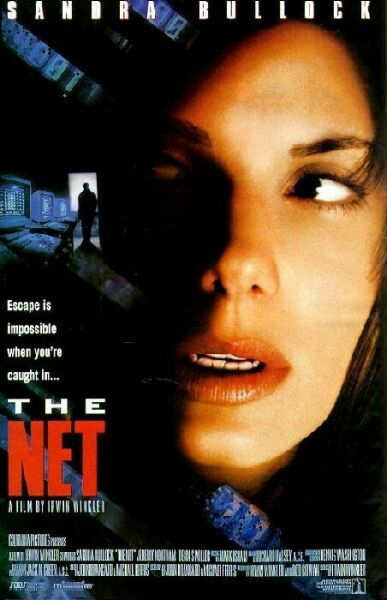 "The Net" is a 1995 film directed by and starring , and . The storyline is based on the public fear of Big Brother in the United States. The film was followed by a short-lived television series in and a sequel, The Net 2.0, produced and directed by the son of producer Irwin Winkler, in . Only the TV series has continuity with the original film.

Angela Bennett () is a (beta tester) for Cathedral Software, whose life completely revolves around her work. She is a quiet but strong-willed character, perceived as introverted by her neighbors.

A fellow analyst from Cathedral Software, Dale, sends her a program on a disk that when run displays a peculiar (π) symbol in the lower-right corner. Dale instructs Angela to hold the CTRL and SHIFT buttons while clicking the π symbol, revealing that it gives the user entry point access to government and military computer systems. It is learned 'they' have recently implemented a newly developed piece of illegitimate 'protection' software called The GateKeeper System and this is what the film hinges upon.

On vacation in , Jack Devlin () acquaints himself with Angela under the pretense that he is just another computer hacker on vacation. He is later revealed to have been sent by a cyber-terrorist group within Cathedral Software known as the s. Jack tries to steal the computer disk she has with her that contains the program permitting entry to other computer systems, displayed in the first scenes of the film, but she escapes. Angela then learns just what the Praetorians are capable of with the GateKeeper's backdoor. When she tries to re-enter the United States, Angela discovers that her identity has been changed by the hackers who are stalking her, and she is now listed as "Ruth Marx," a convicted prostitute with a string of drug offenses.

Now a wanted felon, Angela goes on the run. As her life revolves almost exclusively around her work, and her mother suffers from Alzheimer's, she is unable to find anyone who can identify her. Finally, she contacts her former lover and psychiatrist (), but he is also murdered as a result of the hackers' machinations.

Desperate to escape the 'net,' Angela sneaks into the Cathedral office where the hacker is thought to be located. She identifies one of the hackers, the real Ruth Marx (), now using Angela's identity, and contrives to uncover the master plan of the Praetorians, which is to install their own 'Gatekeeper' software into the mainframes of several government and military computer systems. Angela sets off the fire alarm and manages to copy all of the evidence of the hacker's plan onto a disk, just before the fake Angela makes it back to her desk.

At a computer convention, she sends an to the , revealing the hackers' plan. Jack and Ruth arrive at the computer station where Angela was working at and hacks into the FBI mainframe, he tells Angela that everything she did will be deleted by pressing the escape key. But what Jack didn't realize is that Angela inserted a disk that contained a virus that will infect any system when the escape key is pressed. In doing so, he releases the virus into Cathedral's mainframe and all of the files are deleted. Angela escapes and she is chased by Jack and Ruth. Jack accidentally kills his partner and the real Angela ambushes Jack, knocking him off a catwalk and sending him to his death.

Based on the evidence that she has sent the FBI, the hackers are arrested, and Angela gets her life back.

The film was not received well overall by most critics, gathering a rating of only 30% at . , however, gave a positive review of three stars. Additionally, Sandra Bullock was nominated for "Most Desirable Female" at the 1996 .